SAN ANTONIO, TX - An initial foam impact test on a section of an orbiter reinforced carbon-carbon left-wing leading edge showed visible and significant damage on RCC panel 6 and the T-seal between RCC panels 6 and 7, the Columbia Accident Investigation Board reported today.

The foam-strike was part of a series of tests the CAIB is conducting at Southwest Research Institute to determine how a foam strike of the kind observed on Columbia's launch might damage the RCC panels, T-seals, or their support structure. The tests were designed to bracket the observed impact region and conditions.

In today's outdoor test, investigators fired a large block of foam from a pressurized nitrogen gun aimed at the lower side of left-wing RCC panel 6. The foam struck the panel directly on target and created a three-inch crack extending from a visible three-quarter inch damage area on the outside of the RCC to the RCC rib inside the wing. Later examination revealed that the T-seal between panels 6 and 7 was cracked as well. The strike also caused a shift in the position of RCC panel 6 and the T-seals on either side of that panel, and chipped a carrier panel on the upper side of the wing.

RCC panel 6 was an actual panel that flew 30 missions on Discovery, another Orbiter.

The CAIB has not reached any final conclusions and has not determined the cause of the loss of the shuttle and crew. The board's final report will be issued later this summer. 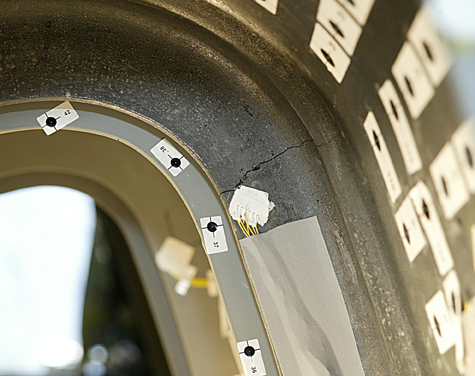 Photo of crack on internal rib of reinforced carbon-carbon panel 6 after foam-impact test on June 6, 2003. The crack is located on the side closest to panel 7.