On September 6, while performing work on the NOAA-N Prime spacecraft, being prepared to launch in 2008 for the National Oceanic and Atmospheric Administration (NOAA), the satellite was dropped.

Lockheed Martin, the contractor in charge of the construction and test of the satellite in Sunnyvale, Calif., NASA and NOAA formed teams to investigate the accident and assess impact. The 14-foot spacecraft was about three feet off the ground in an upright stance, when it slipped from a fixture, as it was being turned from a vertical to horizontal position.

"NASA and NOAA are understandably concerned about this accident, because the NOAA-N Prime spacecraft is vital to the continuity of the polar-orbiting environmental satellite program. We are waiting for an assessment of the damage from the investigation teams. We will have a better idea of the extent of the impact on our satellite programs when the results are available," said retired Navy Vice Admiral Conrad C. Lautenbacher, Ph.D, undersecretary of commerce for oceans and atmosphere and NOAA administrator.

NOAA-N Prime is under guard, and Lockheed Martin and NASA have secured all records.

NASA develops the POES for NOAA on a reimbursable basis. NASA's Goddard Space Flight Center, Greenbelt, Md, performs program management for the development of the satellites. 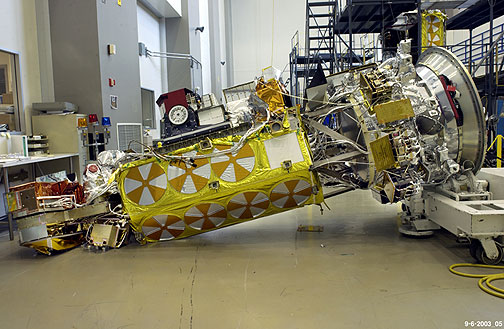