While searching for planet-sized bodies that might accompany the nearby star system Epsilon Indi, astronomers using the Gemini South telescope in Chile made a related but unexpected detection.

Widely observed by telescopes on the ground and in space, Epsilon Indi was known to host an orbiting companion, called Epsilon Indi B, which was discovered last year and is the nearest known specimen of a brown dwarf. Brown dwarfs are very small, cool stars thirty to forty times more massive than Jupiter but of similar size. Despite all the observing, it took the combination of Gemini's powerful infrared capabilities and the extremely sensitive spectrograph/imager called PHOENIX (without adaptive optics) to reveal the more elusive body.

"Epsilon Indi Ba is the closest confirmed brown dwarf to our solar system," says Dr. Gordon Walker (University of British Columbia, Vancouver, Canada), who led the research team that includes Dr. Suzie Ramsay Howat (UK Astronomy Technology Centre, Edinburgh, UK). Dr. Walker explains, "With the detection of Epsilon Indi Bb, we now know that Epsilon Indi Ba has a close companion that appears to be another, even cooler brown dwarf. One certainty is that the Epsilon Indi system is even more interesting than we previously thought."

The team of scientists who detected Epsilon Indi Bb using the Gemini South Telescope on Cerro Pachón, Chile, were the first to report this finding, which was published in the IAU Circular Volume 8818. Subsequently, the VLT (Very Large Telescope) announced that scientists had actually observed the object five days earlier (using adaptive optics), and their finding is reported at http://xxx.lanl.gov/abs/astro-ph?0309256.

"When the target was acquired and we saw that there were clearly two objects close together, we initially thought it must be the wrong object. Epsilon Indi Ba, formerly called Epsilon Indi B, had been observed before and in those observations, no one noticed the companion object. It was a tremendous surprise for us," says Dr. Kevin Volk (Gemini Observatory, La Serena, Chile) who was actually making the observation at the Gemini South telescope along with Dr. Robert Blum (CTIO, La Serena, Chile).

The serendipitous nature of the detection took the science team--whose members are from Canada, the U.K., the U.S. and Chile--by surprise. Dr. Blum elaborates, "We then found that the companion, named Epsilon Indi Bb, is invisible in the methane band where previous Gemini observations had been taken. The coolest brown dwarfs are very faint and hard to detect, but there may be vast numbers of them--which makes this detection important." 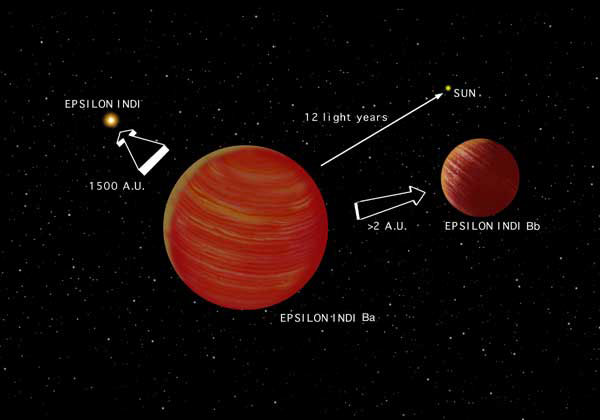 Artist's conception of the Epsilon Indi system showing Epsilon Indi and the brown-dwarf binary companions. Due to the perspective of the brown dwarf companions, the relative sizes are not represented in this illustration. Artwork by Jon Lomberg. "Gemini Observatory Illustration"

"Because this system is so close to us, it appears to move quite rapidly in the sky," says Dr. Volk. "We were able to confirm our detection--and rule out a more distant background object--within a few weeks since we could detect the motion of the system relative to the background stars relatively quickly."

As the facts surrounding the detection become clearer with additional spectroscopic data, the research team expects that important details about Epsilon Indi Bb will be revealed. "Unfortunately, the window for observing this system is nearly closed for this year, so we will have to wait until early next year when we can see this system again in the morning sky," says Dr. David Balam (University of Victoria, Canada).

The data recently obtained from Gemini show that Epsilon Indi Bb is cooler and less massive than Epsilon Indi Ba as demonstrated by its significantly lower brightness and deep methane absorption. Methane absorption is a key indicator for low mass objects since gaseous methane can only exist in the lower temperature environments of the atmospheres of brown dwarfs and planets where the gas can exist.

Epsilon Indi Ba and Bb are members of a recently discovered type of astronomical object--the "T" class brown dwarfs. These T-dwarfs have diameters approximately equal to Jupiter but with more mass. Spectra of Epsilon Indi Ba, taken with PHOENIX by Dr. Verne Smith (University of Texas, El Paso) and collaborators, show the Epsilon Indi Ba has 32 times the mass of Jupiter and a 1500-degree surface temperature. It is spinning about three times faster than Jupiter. Epsilon Indi Bb has less mass, is cooler, but is still much more massive and hotter than Jupiter. Like Jupiter, the T-dwarfs do not have enough mass to make energy the way the sun does from nuclear fusion. Epsilon Indi Ba and Bb are glowing from heat resulting from the mass pushing down on the interior.

PHOENIX, the instrument that is responsible for producing the data, is a near-infrared, high-resolution spectrometer that was built by the National Optical Astronomy Observatory (NOAO) in Tucson, Arizona, and was commissioned on Gemini South in 2001. Dr. Ken Hinkle (NOAO, Tucson, Arizona) said, "PHOENIX was designed for exactly this type of research. It is the first high-resolution infrared spectrograph on a Gemini telescope, and the first high-resolution infrared spectrograph on any southern hemisphere telescope."

Dr. Phil Puxley, Associate Director of Gemini South, adds, "Gemini's infrared optimization makes the 8-meter twin telescopes ideal for capturing such serendipitous discoveries. Finds like this are exactly what Gemini is designed to do and this sort of exciting work demonstrates the potential of Gemini's science."

Epsilon Indi is visible with the naked eye from June to December in the southern hemisphere. It can be detected with the locator map available at http://www.gemini.edu/science/epsilonindi-images.html, which also contains other images and illustrations.


The Gemini Observatory is an international collaboration that has built two identical 8-meter telescopes. The Frederick C. Gillett Gemini Telescope is located at Mauna Kea, Hawai`i (Gemini North) and the other telescope at Cerro Pachón in central Chile (Gemini South), and hence provide full coverage of both hemispheres of the sky. Both telescopes incorporate new technologies that allow large, relatively thin mirrors under active control to collect and focus both optical and infrared radiation from space.

The Gemini Observatory provides the astronomical communities in each partner country with state-of-the-art astronomical facilities that allocate observing time in proportion to each country's contribution. In addition to financial support, each country also contributes significant scientific and technical resources. The national research agencies that form the Gemini partnership include: the US National Science Foundation (NSF), the UK Particle Physics and Astronomy Research Council (PPARC), the Canadian National Research Council (NRC), the Chilean Comisión Nacional de Investigación Cientifica y Tecnológica (CONICYT), the Australian Research Council (ARC), the Argentinean Consejo Nacional de Investigaciones Científicas y Técnicas (CONICET) and the Brazilian Conselho Nacional de Desenvolvimento Científico e Tecnológico (CNPq). The Observatory is managed by the Association of Universities for Research in Astronomy, Inc. (AURA) under a cooperative agreement with the NSF. The NSF also serves as the executive agency for the international partnership.