NASA announced plans to name the landing site of the Mars Opportunity rover in honor of the Space Shuttle Challenger's final crew. The area in the vast flatland called Meridiani Planum, where Opportunity landed this weekend, will be called the Challenger Memorial Station.

The seven-member crew of Space Shuttle Challenger was lost when the orbiter suffered an in-flight breakup during launch Jan. 28, 1986, 18 years ago today.

NASA selected Meridiani Planum because of extensive deposits of a mineral called crystalline hematite, which usually forms in the presence of liquid water. Scientists had hoped for a specific landing site where they could examine both the surface layer that's rich in hematite and an underlying geological feature of light-colored layered rock. The small crater in which Opportunity alighted appears to have exposures of both, with soil that could be the hematite unit and an exposed outcropping of the lighter rock layer.

Challenger's 10th flight was to have been a six-day mission dedicated to research and education, as well as the deployment of the TDRS-B communications satellite.

Opportunity successfully landed on Mars Jan. 25. It will spend the next three months exploring the region surrounding what is now known as Challenger Memorial Station to determine if Mars was ever watery and suitable to sustain life.

Opportunity's twin, Spirit, is trailblazing a similar path on the other side of the planet, in a Connecticut-sized feature called Gusev Crater.

A composite image depicting the location of the Challenger Memorial Station can be found on the Web at:

Additional information about the project is available from NASA, JPL and Cornell University, Ithaca, N.Y., on the Internet at: 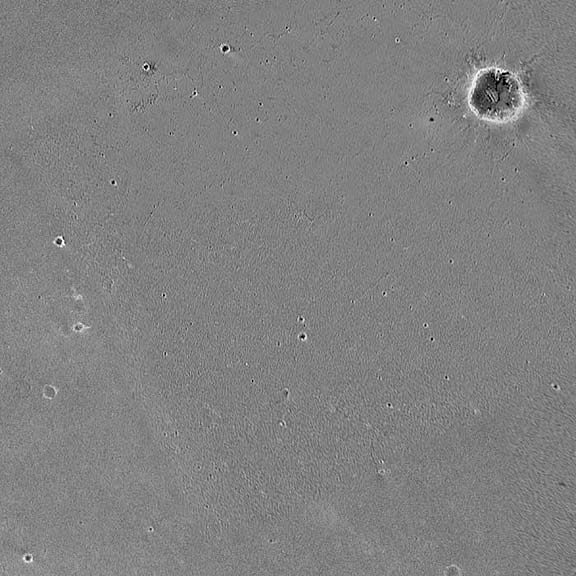 A composite image reveals Challenger Memorial Station. The image is actually an amalgamation of a Mars Global Surveyor's Mars Orbiter Camera image and the third and final picture taken by Opportunity's DIMES camera ( Descent Image Motion Estimation System) during descent. The location of the site is a 20-meter (65.6 foot) wide, 2-meter (6.6 foot) deep crater just to the right of center in the composite image. The final crew of the space shuttle Challenger was lost when the shuttlesuffered an in-flight breakup during launch on Jan. 28, 1986.