Most Distant Object in Solar System Discovered by NASA Researchers

"The Sun appears so small from that distance that you could completely block it out with the head of a pin," said Dr. Mike Brown, California Institute of Technology, Pasadena, Calif., associate professor of planetary astronomy and leader of the research team. The object, called "Sedna" for the Inuit goddess of the ocean, is 13 billion kilometers (8 billion miles) away, in the farthest reaches of the solar system.

This is likely the first detection of the long-hypothesized "Oort cloud," a faraway repository of small icy bodies that supplies the comets that streak by Earth. Other notable features of Sedna include its size and reddish color. After Mars, it is the second reddest object in the solar system. It is estimated Sedna is approximately three-fourths the size of Pluto. Sedna is likely the largest object found in the solar system since Pluto was discovered in 1930.

Sedna is extremely far from the Sun, in the coldest know region of our solar system, where temperatures never rise above minus 240 degrees Celsius (minus 400 degrees Fahrenheit). The planetoid is usually even colder, because it approaches the Sun only briefly during its 10,500-year solar orbit. At its most distant, Sedna is 130 billion kilometers (84 billion miles) from the Sun, which is 900 times Earth's solar distance.

Scientists used the fact that even the Spitzer telescope was unable to detect the heat of the extremely distant, cold object to determine it must be less than 1,700 kilometers (about 1,000 miles) in diameter, which is smaller than Pluto. By combining available data, Brown estimated Sedna's size at about halfway between Pluto and Quaoar, the planetoid discovered by the same team in 2002.

The elliptical orbit of Sedna is unlike anything previously seen by astronomers. However, it resembles that of objects predicted to lie in the hypothetical Oort cloud. The cloud is thought to explain the existence of certain comets. It is believed to surround the Sun and extend outward halfway to the star closest to the Sun. But Sedna is 10 times closer than the predicted distance of the Oort cloud. Brown said this "inner Oort cloud" may have been formed by gravity from a rogue star near the Sun in the solar system's early days.

"The star would have been close enough to be brighter than the full moon, and it would have been visible in the daytime sky for 20,000 years," Brown explained. Worse, it would have dislodged comets farther out in the Oort cloud, leading to an intense comet shower that could have wiped out some or all forms of life that existed on Earth at the time.

Rabinowitz said there is indirect evidence that Sedna may have a moon. The researchers hope to check this possibility with NASA's Hubble Space Telescope. Trujillo has begun to examine the object's surface with one of the world's largest optical/infrared telescopes, the 8-meter (26-foot) Frederick C. Gillett Gemini Telescope on Mauna Kea, Hawaii. "We still don't understand what is on the surface of this body. It is nothing like what we would have predicted or what we can explain," he said.

Sedna will become closer and brighter over the next 72 years, before it begins its 10,500-year trip to the far reaches of the solar system. "The last time Sedna was this close to the Sun, Earth was just coming out of the last ice age. The next time it comes back, the world might again be a completely different place," Brown said.

Graphics supporting this news briefing will be posted Monday on the Internet by 1 p.m. EST: 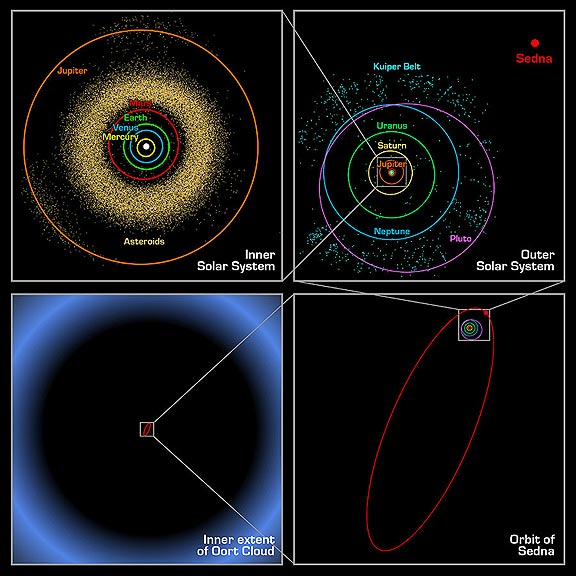 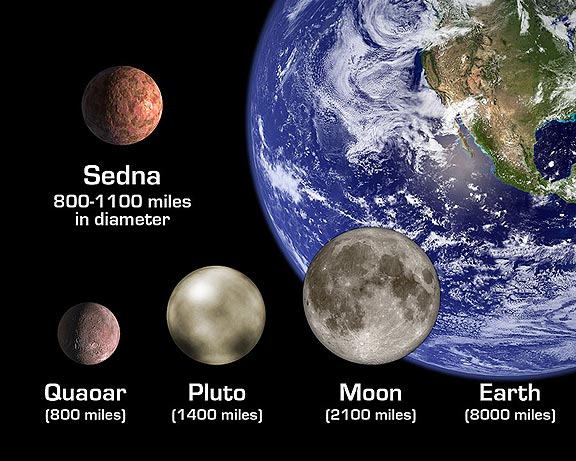