Thanks to ESA's Mars Express, we now know that Mars has vast fields of perennial water ice, stretching out from the south pole of the Red Planet.

Astronomers have known for years that Mars possessed polar ice caps, but early attempts at chemical analysis suggested only that the northern cap could be composed of water ice, and the southern cap was thought to be carbon dioxide ice.

Recent space missions then suggested that the southern ice cap, existing all year round, could be a mixture of water and carbon dioxide. But only with Mars Express have scientists been able to confirm directly for the first time that water ice is present at the south pole too. 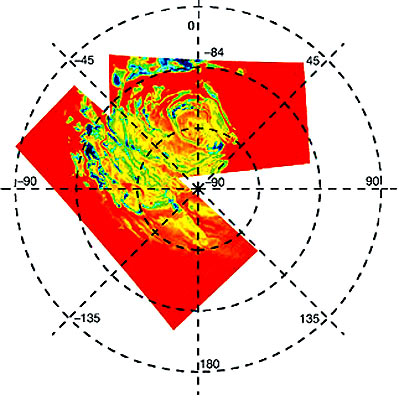 Mars Express made observations with its OMEGA instrument to measure the amounts of sunlight and heat reflected from the Martian polar region. When planetary scientists analysed the data, it clearly showed that, as well as carbon dioxide ice, water ice was present too.

The results showed that hundreds of square kilometres of ëpermafrost' surround the south pole. Permafrost is water ice, mixed into the soil of Mars, and frozen to the hardness of solid rock by the low Martian temperatures. This is the reason why water ice has been hidden from detection until now - because the soil with which it is mixed cannot reflect light easily and so it appears dark. 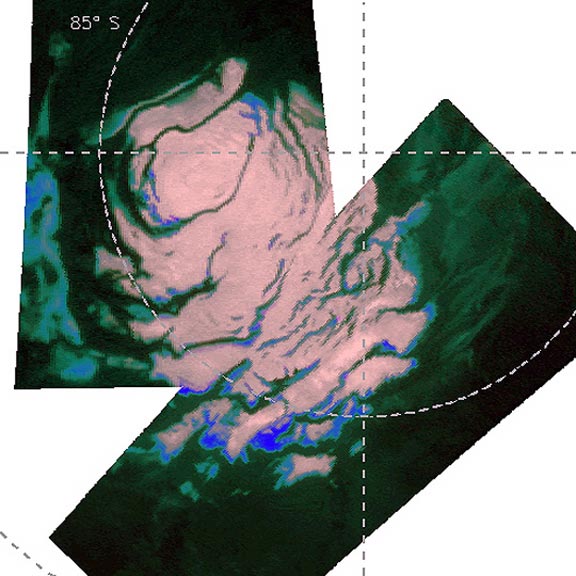 However, OMEGA looked at the surface with infrared eyes and, being sensitive to heat, clearly picked up the signature of water ice. The discovery hints that perhaps there are much larger quantities of water ice all over Mars than previously thought.

Using this data, planetary scientists now know that the south polar region of Mars can be split into three separate parts. Part one is the bright polar cap itself, a mixture of 85% highly reflective carbon dioxide ice and 15% water ice. 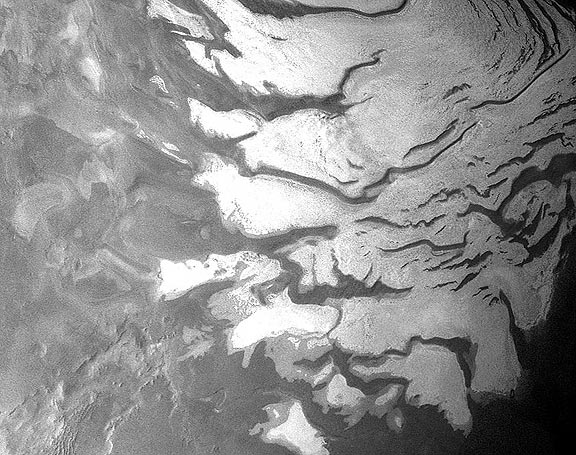 The second part comprises steep slopes known as ëscarps', made almost entirely of water ice, that fall away from the polar cap to the surrounding plains. The third part was unexpected and encompasses the vast permafrost fields that stretch for tens of kilometres away from the scarps.

The OMEGA observations were made between 18 January and 11 February this year, when it was late summer for the Martian southern hemisphere and temperatures would be at their highest. Even so, that is probably only -130 degrees Celsius and the ice that Mars Express has observed is a permanent feature of this location.

During the winter months, scientists expect that carbon dioxide from the atmosphere will freeze onto the poles, making them much larger and covering some of the water ice from view.

It will be particularly exciting when MARSIS looks at the south pole because, once planetary scientists know how deep the ice reaches, they will be able to calculate exactly how much water there is. Knowing this is very important to understand how Mars evolved and if it ever harboured life.