The 37th ESA Parabolic Flight Campaign started last week in Bordeaux, France, with preparation and training for the experimenters involved. On 8 June 2004, the specially strengthened 'Zero-G' Airbus A300 aircraft will take off for the first of three consecutive flight days.

In a specially-assigned air corridor high above the Gulf of Gascogne, the Airbus will fly a series of 30 parabolic arcs, providing researchers with a total of 10 minutes of weightlessness each day. 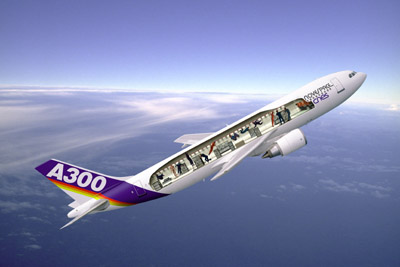 The parabolic flight campaigns are organised by ESA, in cooperation with French firm Novespace, to conduct research experiments in weightlessness, and to prepare experiments for space flights on board the International Space Station (ISS). In all, ten experiments will be carried out during the 37th campaign, seven in physical sciences and three in life sciences.

Among the experiments packed into the 'Zero-G' Airbus A300 will be a French experiment looking at the effect weightlessness has on human perception of visual illusions.

When we look at pictures consisting of vertical and horizontal lines our eyes can play tricks on us. For example, looking at the 'reversed T' image (left), although the lines are exactly the same length, we have the illusion that the vertical line is longer than the horizontal line.

On Earth because of gravity our senses are constantly telling us which direction is up. We know when we are upside-down because of the blood rushing to our head, and using our eyes we can see that the furniture remains on the floor, exactly where we expect it to be.

In the same way it is thought that the appearance of visual illusions relies on our senses knowing that Earth's gravity always acts vertically. If you take away gravity, do you still see the illusion? This research will help physiologists understand how human perception works, and how it should be taken into account during spaceflights.

A team from Eindhoven Technical University, The Netherlands, are taking part in their third parabolic flight campaign. Their experiment, ARGES, looking at super energy saving lamps which are being developed in cooperation with electronics company Philips, yielded very promising results during the recent DELTA Mission to the ISS. The extra data they will collect during the parabolic flights will help them further in interpreting their findings and ultimately in improving the efficiency of the plasma lamps.

A mission to the International Space Station takes place in Earth orbit, and if necessary astronauts can return to Earth within a few hours. If plans for interplanetary human space missions are to be realised, with a return journey of up to a couple of years, future astronauts will have to be able to act during a medical emergency. Using a mannequin, a French medical team will be rehearsing surgical procedures in a weightless environment during this campaign.

The European-built Protein Crystallisation Diagnostics Facility (PCDF) will also be flown on board the 'Zero-G' Airbus. The facility's first ever experiment in weightlessness will be used to obtain calibration data. The PCDF will later be accommodated on ISS within the European Drawer Rack, which will be launched with the European Columbus laboratory.

"By increasing the number of parabolic flight campaigns, we are able to offer more scientists access to an environment in which they can develop and refine their experiments and procedures ahead of a future flight to the Station."