The data are from the Multi-angle Imaging SpectroRadiometer and Advanced Spaceborne Thermal Emission and Reflection Radiometer instruments on NASA’s Terra spacecraft, as well as from the Shuttle Radar Topography Mission. 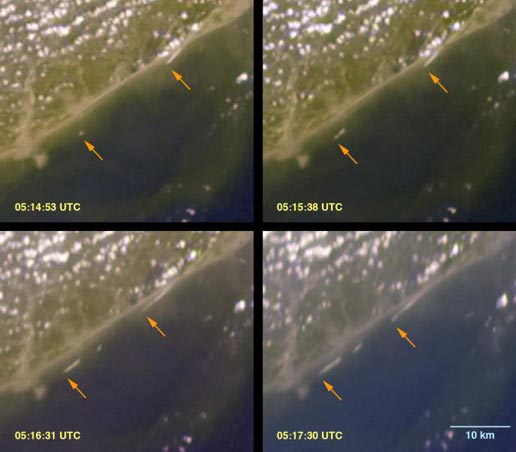 Image above: The initial tsunami waves reached the eastern Indian coast around 3:35 UTC, based on tide gauge measurements made at the port city of Vishakapatnam. The Multi-angle Imaging SpectroRadiometer (MISR) aboard NASA's Terra satellite passed over the eastern Indian coast between 5:10 to 5:20 UTC, when the tide gauge indicated the arrival of another series of waves. Because MISR's nine cameras imaged the coast over a time span of about 7 minutes, and because the the waves are unusually large, MISR was able to capture unique time-lapse imagery of the breaking waves. The still image shows four frames from the instrument's backward-viewing cameras spanning a period of about 2.5 minutes. This scene is located along the shores of Andhra Pradesh, near the mouth of the Godavari River, and covers an area of 42 kilometers x 37 kilometers. The arrows show the progression of the southwestern edges of the breakers. Image credit: NASA/JPL. 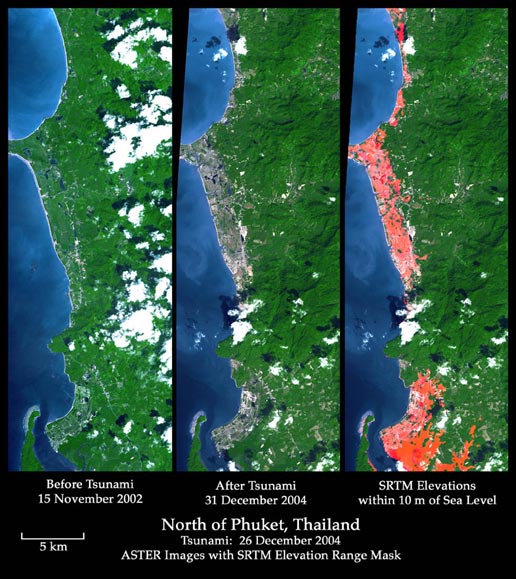 Image above: The Indian Ocean coastline near Phuket, Thailand is a major tourist destination that was in the path of the tsunami produced by a giant offshore earthquake on December 26, 2004. This disaster resulted in a heavy loss of life. These simulated natural color ASTER (Advanced Spaceborne Thermal Emission and Reflection Radiometer) images show a 27 kilometer (17-mile) long stretch of coast 80 kilometers (50 miles) north of the Phuket airport on December 31 (middle) and also two years earlier (left). The changes along the coast are obvious (changing from green to grey) where the vegetation was stripped away by the tsunami. The image on the right is a copy of the later ASTER scene but it includes highlighting in red for areas that have elevations within 10 meters (33 feet) of sea level. The red areas appear to include most of the tsunami inundated areas. Image credit: NASA/JPL.
+ High resolution/full caption. 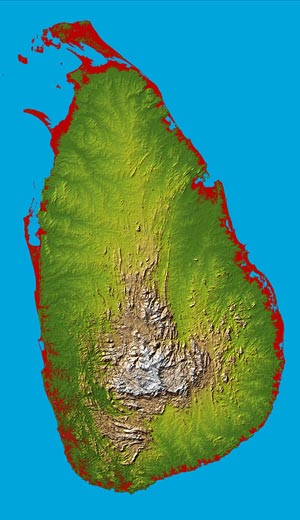 Image right: The topography of the island nation of Sri Lanka is well shown in this color-coded shaded relief map generated with digital elevation data from the Shuttle Radar Topography Mission (SRTM). In this view, heights below 10 meters (33 feet) above sea level have been colored red. These low coastal elevations extend 5 to 10 km (3.1 to 6.2 mi) inland on Sri Lanka and are especially vulnerable to flooding associated with storm surges, rising sea level, or, as in the aftermath of the earthquake of December 26, 2004, tsunami. These so-called tidal waves have occurred numerous times in history and can be especially destructive, but with the advent of the near-global SRTM elevation data planners can better predict which areas are in the most danger and help develop mitigation plans in the event of particular flood events. 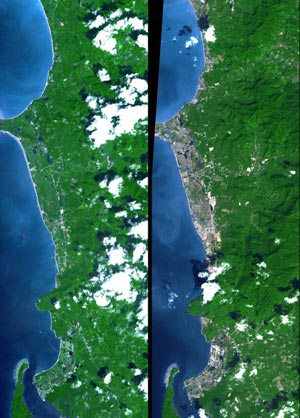 Image left: The island of Phuket on the Indian Ocean coast of Thailand is a major tourist destination and was also in the path of the tsunami that washed ashore on December 26, 2004, resulting in a heavy loss of life. These simulated natural color ASTER images show a 27 kilometer (17-mile) long stretch of coast north of the Phuket airport on December 31 (right), along with an image acquired two years earlier (left). The changes along the coast are obvious where the vegetation has been stripped away. These images are being used to create damage assessment maps for the U.S. Agency for International Development (USAID) Office of Foreign Disaster Assistance.