HONOLULU, Hawaii – By using new, high spatial resolution infrared data from NASA's Mars Odyssey spacecraft, Victori Hamilton from the University of Hawaii at Manoa and Philip Christensen from Arizona State University have concluded that region on the surface of Mars known to contain olivine-rich rocks is actually 4 times larger than previously estimated.

The bedrock in question is adjacent to Syrtis Major, one of Mars' largest volcanoes. This region is of interest to scientists because it lies in a relatively old region on Mars, and yet contains significant amounts of olivine, a mineral that can weather rapidly in the presence of water.

These results are reported in the June 2005 cover story of the journal Geology.

Based on its infrared spectral signatures, this region was previously identified by the NASA Mars Global Surveyor Thermal Emission Spectrometer (MGS TES) (launched in 1996) as having an enrichment in the mineral olivine (the dominant mineral component of several Martian meteorites) relative to typical Martian basalts. Infrared spectra of rocks are like fingerprints, allowing scientists to determine their mineral make-up. Using higher spatial resolution data available from the Mars Odyssey spacecraft's Thermal Emission Imaging System (THEMIS) (launched in 2001), the researchers were able to expand the boundaries of the high-olivine region by comparing the infrared spectra and temperature measurements acquired by THEMIS to geological features in visible wavelength digital images taken by THEMIS and the MGS Mars Orbiter Camera. 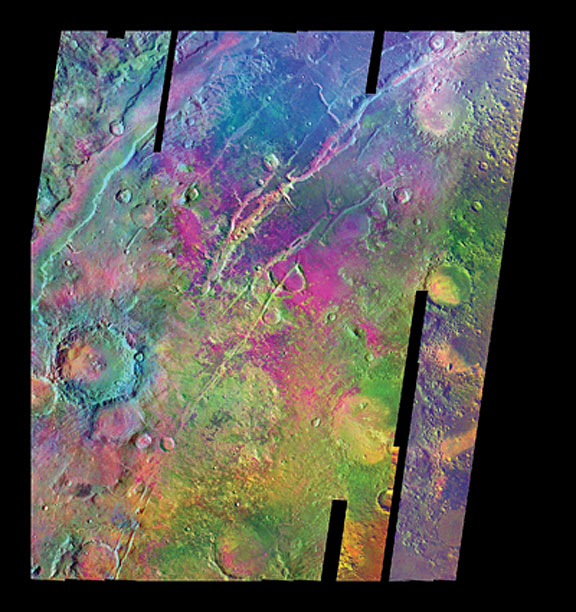 "By having the different types of high resolution visible, spectral, and temperature information available, we were able to see both geochemical and geological features on Mars that showed us that this high-olivine region is much larger than we thought previously," said Hamilton, an assistant professor in the Hawaii Institute of Geophysics and Planetology. "We now have a better view of the detailed geology of this ancient region."

The region is northeast of the Syrtis Major volcanic shield, and was previously shown to have an area of ~ 30,000 km2. In this new study, the deposits in question are now shown to be 113,000 km2, almost 4 times larger than previously thought. As a comparison, the Big Island of Hawai'i, with its five volcanoes, has a surface area of ~10,500 km2 – almost 11x smaller than the deposits on Mars. These olivine-rich basalts appear to be present in the form of in-place, layered rock units that are being exposed by tectonic uplift and the erosion of younger rocks. One of the findings of the study is that at least some of these rocks were erupted onto the surface of Mars, where they might have been exposed to more water and weathering than if they had been intruded into the subsurface, as previously proposed.

"How much liquid water was present on the surface of Mars in the past, and for how long, are big questions in planetary science right now," Hamilton says. "Under many conditions, olivine turns into other minerals very rapidly in the presence of water, so the preservation of all this olivine in a very old region of Mars is intriguing. One hypothesis is that this area of Mars has not seen much water. Now that we know the detailed distribution of these olivine-rich rocks, we can search more of the spectral data for minerals that might have formed if the olivine was exposed to water at some point in its past."

This research is covered in the June issue of the GEOLOGY, published by the Geological Society of America, and is featured on the magazine's cover.

This research was funded through grants from the National Aeronautics and Space Administration (NASA).