Using NASA's Hubble Space Telescope to view the ninth planet in our solar system, astronomers discovered Pluto may have not one, but three moons.

If confirmed, the discovery of the two new moons could offer insights into the nature and evolution of the Pluto system; Kuiper Belt Objects with satellite systems; and the early Kuiper Belt. The Kuiper Belt is a vast region of icy, rocky bodies beyond Neptune's orbit.

"If, as our new Hubble images indicate, Pluto has not one, but two or three moons, it will become the first body in the Kuiper Belt known to have more than one satellite," said Hal Weaver of the Johns Hopkins Applied Physics Laboratory, Laurel, Md. He is co-leader of the team that made the discovery.

Pluto was discovered in 1930. Charon, Pluto's only confirmed moon, was discovered by ground-based observers in 1978. The planet resides about 3 billion miles from the sun in the heart of the Kuiper Belt. 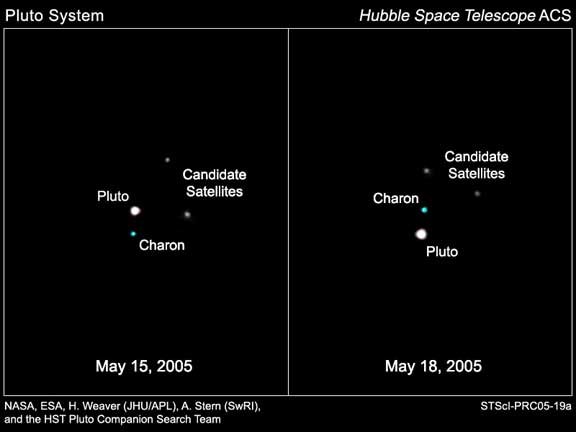 Image: NASA's Hubble Space Telescope has spotted two possible new moons orbiting Pluto, the ninth planet in our solar system. If confirmed, the candidate moons could provide new insight into the nature and evolution of the Pluto system and the early Kuiper Belt. The Kuiper Belt is a vast region of icy, rocky bodies beyond Neptune's orbit. These Hubble Space Telescope images reveal Pluto, its large moon Charon, and the planet's two new candidate satellites. Between May 15 and May 18, 2005, Charon, and the putative moons all appear to rotate counterclockwise around Pluto.

"Our result suggests other bodies in the Kuiper Belt may have more than one moon. It also means planetary scientists will have to take these new moons into account when modeling the formation of the Pluto system," said Alan Stern of the Southwest Research Institute, Boulder, Colo. Stern was co-leader of the research team.

The candidate moons, provisionally designated S/2005 P1 and S/2005 P2, were observed approximately 27,000 miles away from Pluto. The objects are roughly two to three times as far from Pluto as Charon.

The team plans to make follow-up Hubble observations in February to confirm the newly discovered objects are truly Pluto's moons. Only after confirmation will the International Astronomical Union consider names for S/2005 P1 and S/2005 P2.

The Hubble's Advanced Camera for Surveys observed the two new candidate moons on May 15, 2005. The candidates are roughly 5,000 times fainter than Pluto. Three days later, Hubble looked at Pluto again. The two objects were still there and appeared to be moving in orbit around Pluto.

The team looked long and hard for other potential moons around Pluto. "These Hubble images represent the most sensitive search yet for objects around Pluto," said team member Andrew Steffl of the Southwest Research Institute. "It is unlikely that there are any other moons larger than about 10 miles across in the Pluto system," he said.

The Hubble Space Telescope is a project of international cooperation between NASA and the European Space Agency. The Space Telescope Science Institute in Baltimore conducts Hubble science operations. The Institute is operated for NASA by the Association of Universities for Research in Astronomy, Inc., Washington.

NASA has images from the research available on the Web, at: http://www.nasa.gov/vision/universe/solarsystem/hubble_pluto.html

For detailed information and images about this research on the Web, visit: http://hubblesite.org/news/2005/19

For information about NASA and agency programs on the Web, visit: http://www.nasa.gov/home