2005 Was the Warmest Year in a Century

The year 2005 may have been the warmest year in a century, according to NASA scientists studying temperature data from around the world.

Climatologists at NASA's Goddard Institute for Space Studies (GISS) in New York City noted that the highest global annual average surface temperature in more than a century was recorded in their analysis for the 2005 calendar year.

Some other research groups that study climate change rank 2005 as the second warmest year, based on comparisons through November. The primary difference among the analyses, according to the NASA scientists, is the inclusion of the Arctic in the NASA analysis. Although there are few weather stations in the Arctic, the available data indicate that 2005 was unusually warm in the Arctic.

In order to figure out whether the Earth is cooling or warming, the scientists use temperature data from weather stations on land, satellite measurements of sea surface temperature since 1982, and data from ships for earlier years. 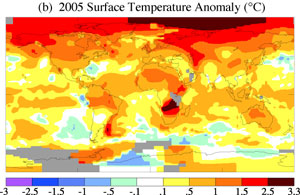 Previously, the warmest year of the century was 1998, when a strong El Nino, a warm water event in the eastern Pacific Ocean, added warmth to global temperatures. However, what's significant, regardless of whether 2005 is first or second warmest, is that global warmth has returned to about the level of 1998 without the help of an El Nino.

The result indicates that a strong underlying warming trend is continuing. Global warming since the middle 1970s is now about 0.6 degrees Celsius (C) or about 1 degree Fahrenheit (F). Total warming in the past century is about 0.8° C or about 1.4° F.

Image/animation to right: The animation to the right shows a basic demonstration of the increase in annual mean temperature in ten year increments from 1891 through 1996. Warmest temperatures are in red. Click on image to view animation. Credit: NASA/GISS

Current warmth seems to be occurring nearly everywhere at the same time and is largest at high latitudes in the Northern Hemisphere. Over the last 50 years, the largest annual and seasonal warmings have occurred in Alaska, Siberia and the Antarctic Peninsula. Most ocean areas have warmed. Because these areas are remote and far away from major cities, it is clear to climatologists that the warming is not due to the influence of pollution from urban areas.