OTTAWA, ONTARIO, May 31, 2006 – On April 22, 2001, Colonel Chris Hadfield made space exploration history as the first Canadian to perform a spacewalk when he installed Canadarm2 on the International Space Station. Today, to mark the fifth anniversary of this mission, the Royal Canadian Mint presented Colonel Hadfield with its two new collector coins commemorating the astronaut's historic spacewalk and the development of the Canadarm robotic arms, two extraordinary achievements in Canadian history.

The design of the two coins – one 14-karat proof gold coin and one sterling silver proof coin – features Colonel Hadfield on his momentous spacewalk with Canadarm2 in the background. These coins also reflect the innovative technologies for which the Mint has become famous: a selective hologram of the Canadarm on the sterling silver coin and a bicoloured laser-enhanced Canadarm on the gold coin.

"Colonel Chris Hadfield's historic spacewalk and Canada's development of the Canadarm and Canadarm2 robotic arms are two achievements which are admired around the world and inspire great national pride," said Acting President and CEO of the Royal Canadian Mint, Marguerite F. Nadeau, QC. "The Royal Canadian Mint created these commemorative coins, which embody our collective pride, to pay tribute to these two outstanding achievements in the history of Canadian space exploration."

The Canadarm robotic arms, created for the Canadian Space Agency by MDA, were used during important space missions, including that of Colonel Hadfield.

The Canadarm & Colonel Chris Hadfield collector coins, along with all other coins produced by the Royal Canadian Mint, are available through the Mint by calling 1 800 267-1871 in Canada or 1 800 268-6468 in the United States; by visiting the online store at www.mint.ca; at the Mint boutiques in Ottawa and Winnipeg; or through the global network of authorized Royal Canadian Mint dealers and distributors.

The gold coin, with a limited worldwide mintage of 1000 coins, is the second in the Canadian Achievements series. The first was the 2005 gold coin commemorating the 120th anniversary of the implementation of standard time. With a limited mintage of 1200 coins worldwide, it has already sold out. The sterling silver proof coin, with a worldwide mintage of 20 000 coins, features the same design as the gold coin and was exceptionally produced to be accessible to a wider public given the popularity of Canada's astronauts and the country's robotic arms. 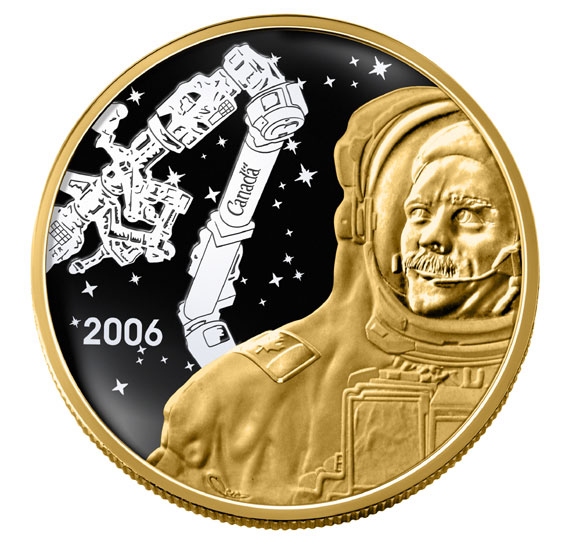 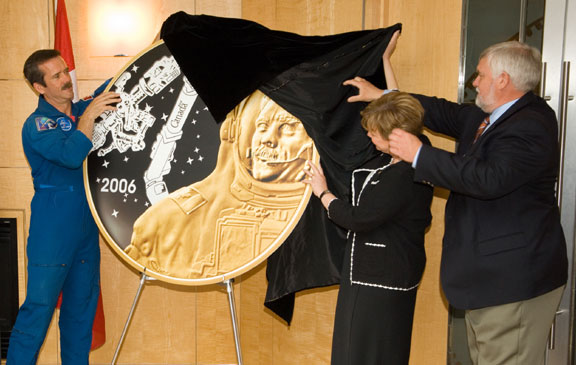 Established in 1989, the Canadian Space Agency (CSA) coordinates all civil, space-related policies and programs on behalf of the Government of Canada. CSA directs its resources and activities through four key thrusts: Earth Observation, Space Science and Exploration, Satellite Communications, and Space Awareness and Learning. By leveraging international cooperation, the CSA generates world-class scientific research and industrial development for the benefit of humanity.

About the Royal Canadian Mint

The RCM, an ISO 9001-2000 certified company, is the Crown corporation responsible for the minting and distribution of Canada's circulation coins. In operation since 1908, the RCM is recognized as one of the largest and most versatile mints in the world, offering a wide range of specialized, high quality coinage products and related services on an international scale.

For more information on the RCM, its products and services, visit www.mint.ca.

Images and product details of the Mint's newest collection are available by visiting ftp://communications:RCM2006@ftp.mint.ca.