NASA's Hubble Space Telescope has revealed two dust disks circling the nearby star Beta Pictoris. The images confirm a decade of scientific speculation that a warp in the young star's dust disk may actually be a second inclined disk, which is evidence for the possibility of at least one Jupiter-size planet orbiting the star.

The disk is fainter than the star because, at the visible wavelengths measured, its dust only reflects light. To see the faint disk, astronomers used Hubble's Advanced Camera for Surveys' coronagraph, which blocked the light from Beta Pictoris. The images clearly show a distinct secondary disk that is tilted by about four degrees from the main disk. The secondary disk is visible out to roughly 24 billion miles from the star, and probably extends even farther. The finding appears in the June 2006 issue of the Astronomical Journal.

The best explanation for the observations is that a suspected unseen planet, up to 20 times the mass of Jupiter and in an orbit within the secondary disk, is using gravity to sweep up material from the primary disk.

"The Hubble observation shows that it is not simply a warp in the dust disk but two concentrations of dust in two separate disks," said lead astronomer David Golimowski of Johns Hopkins University in Baltimore. "The finding suggests that planets could be forming in two different planes. We know this can happen because the planets in our solar system are typically inclined to Earth's orbit by several degrees. Perhaps stars forming more than one dust disk may be the norm in the formative years of a star system."

Computer models by David Mouillet and Jean-Charles Augereau of Grenoble Observatory in France suggest how a secondary dust disk can form. A massive planet in an inclined orbit gravitationally attracts small bodies of rock and/or ice, called planetesimals, from the main disk, and moves them into an orbit aligned with that of the planet.

These perturbed planetesimals then collide with each other, producing the tilted dust disk seen in the new Hubble images.

"The actual lifetime of a dust grain is relatively short, maybe a few hundred thousand years," Golimowski said. "So the fact that we can still see these disks around a 10- to 20-million-year-old star means that the dust is being replenished by collisions between planetesimals."

Astronomers do not know how the massive planet, if it exists, settled into an inclined orbit. However, computer simulations by multiple research teams show planet embryos, which start out in a very thin plane, can, through gravitational interactions, scatter into orbits that become inclined to the primary disk. 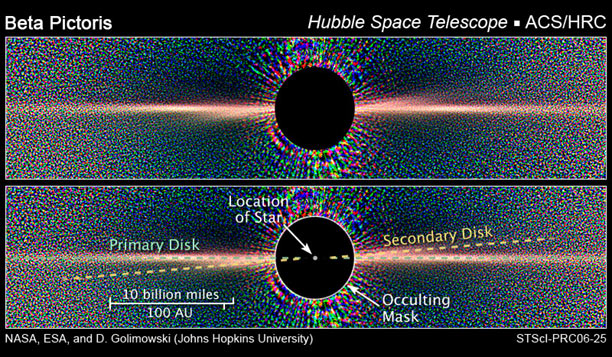 Beta Pictoris is located 63 light-years away in the southern constellation Pictor. Although the star is much younger than the sun, it is twice as massive and nine times more luminous. Beta Pictoris entered the limelight more than 20 years ago when the multinational Infrared Astronomical Satellite detected excess infrared radiation from the star. Astronomers attributed this excess to the presence of warm dust in a disk around the star. The dust disk was first imaged by ground-based telescopes in 1984. The images showed the disk is seen nearly edge-on from Earth. Hubble observations in 1995 revealed an apparent warp in the disk. Subsequent images obtained in 2000 by Hubble's Imaging Spectrograph confirmed the warp.

The latter study was led by Sara Heap of NASA's Goddard Space Flight Center in Greenbelt, Md. Heap and her colleagues suggested the apparent warp may be an unresolved secondary disk tilted about four degrees from the main disk. Several teams of astronomers attributed the warp to a planet in a tilted orbit out of the plane of the main disk.

Astronomers using ground-based telescopes also found various asymmetries in the star's disk. Infrared images taken in 2002 by the Keck II Observatory in Hawaii showed that another smaller inner disk may exist around the star in a region the size of our solar system. Golimowski's team did not spot the inner disk because it is small and blocked by the Advanced Camera's coronagraph. This possible inner disk is tilted in the opposite direction from the disk seen in the new Hubble images. This misalignment implies the tilted disks are not directly related. Nevertheless, they both may bolster evidence for the existence of one or more planets orbiting the star.

Images and more information about Beta Pictoris are available at:

The Hubble Space Telescope is an international cooperative project between NASA and the European Space Agency. The Space Telescope Science Institute is operated for NASA by the Association of Universities for Research in Astronomy, Inc., Washington.