GSLV-F02 launch was the fourth in the series. All the three earlier missions (GSLV-D1, D2 and F01) were completely successful. The mission objective of GSLV-F02 was to place INSAT-4C, an operational satellite into Geo-synchronous Transfer Orbit (GTO). About 55 sec into the flight, GSLV-F02 started deviating significantly from its nominal flight path resulting in the vehicle breaking up at 62 sec after lift-off. The debris fell into Bay of Bengal.

The 15 member FAC chaired by Mr K Narayana, former Director of SDSC SHAR, with the participation of experts from academic and research institutions besides ISRO, has reviewed the performance of GSLV-F02 from lift-off to the end of flight. FAC had detailed deliberations for over 100 hours in several sittings and was assisted by eight specialist sub-committees examining the flight data of vehicle subsystems, manufacturing documents, inspection, calibration and test results, etc. Especially, the details related to the realisation of liquid propulsion stage of GSLV were closely scrutinized. Several tests simulating possible failure modes were also conducted to identify the exact cause. 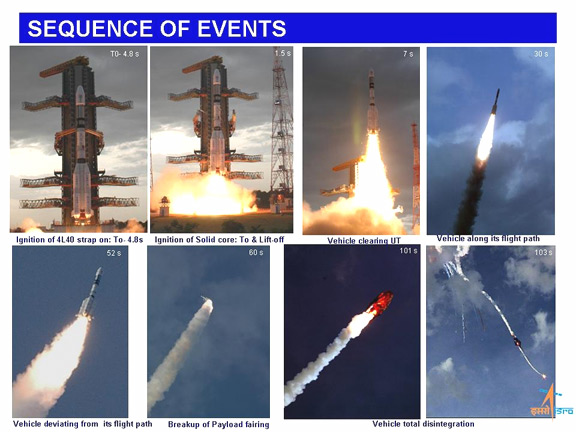 FAC has concluded that the performance of all vehicle subsystems, except one strap-on stage was normal until 56.4 sec. The primary cause for the failure was the sudden loss of thrust in one out of the four liquid propellant strap-on stages (S4) immediately after lift-off at 0.2 sec. With only three strap-on stages working, there was significant reduction in the control capability. However the vehicle attitude could be controlled till about 50 sec. At the same time the vehicle reached the transonic regime of flight and the vehicle attitude errors built up to large values, resulting in aerodynamic loads exceeding the design limits thus leading to break up of the vehicle.

The thrust of the liquid engines used in the strap-on stages is precisely controlled by a set of regulators. Detailed analyses have indicated that in S4 engine the thrust control was not effective. Instead of stabilizing at 5.85 MPa (Mega Pascal) chamber pressure, it reached 7.11 MPa at 2.8 sec. This was much beyond the design limits and the engine failed at 0.2 sec after lift-off, that is 5 sec after its ignition.

Simulations and analyses of flight data and verification through calibration tests have led to the conclusion that the propellant regulator in the failed engine had much higher discharge coefficient in its closed condition. The reason for this could be an inadvertent error in manufacturing, which escaped the subsequent inspection, and acceptance test procedures. This regulator has functioned satisfactorily in all the previous 50 engines manufactured and tested so far.

The larger flow of propellant led to higher operating pressure in the gas generator (4.7 MPa against design specification of 3.6 MPa). Due to this higher operating pressure of the gas generator, the water flow rate into it got reduced. The combined effect of larger flow of propellants and reduced flow of water led to a very high gas temperature of 1823 K against design specification of 900 K and pressure of 4.7 MPa against the design specification of 3.6 MPa. The very high operating pressure and temperature resulted in the structural failure of the gas generator. The consequent abrupt stopping of the turbo pumps that feed propellants at very high pressures to the engines led to loss of thrust of S4 engine. The water calibration tests conducted simulating the malfunction of the propellant regulator hardware could closely reproduce the flight phenomenon thereby confirming the larger flow area. 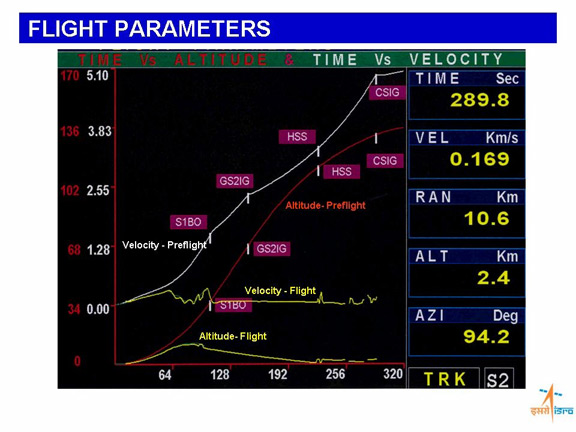 FAC has concluded that the design of GSLV is robust and recommended implementation of strict control on fabrication, inspection and acceptance procedures. Among others, FAC has recommended fabrication processes to be critically reviewed and updated. It has recommended for independent inspection of all critical dimensions of components and subassemblies by in-house agencies. Further, long duration hot test on one out of every 20 engines fabricated has been recommended to ensure that production process is under control. In addition, FAC has recommended strengthening the process of clearance of launch during Automatic Launch Sequence (ALS) phase.

FAC conclusions and recommendations have been accepted and necessary action has been initiated to implement all of them.