Although Ceres is the largest main-belt asteroid and was the first to be discovered (by G. Piazzi in 1801), its physical properties are still not well understood. While it is expected to have retained a large amount of primordial water ice in its interior, many questions about the composition of its surface and sub-surface layers, the properties of its regolith and its degree of differentiation, remain unanswered.

A team of astronomers led by Benoit Carry of the Paris-Meudon Observatory used state-of-the-art adaptive optics instrumentation available at the Keck observatory, Mauna Kea, Hawaii, to image the surface of Ceres with a spatial resolution of ~30km. The observations were carried out during the September 2002 opposition of Ceres in the near-infrared J/H/K-bands, at a wavelength range particularly well adapted to investigate the composition and properties of planetary surfaces. The team produced albedo maps covering 80 percent of the asteroid, which appears to display a wealth of 40 to 160km large geological features with intensity in reflected light varying by ~12 percent across the surface. The team suggests that the variations could be due to terrain features, as well as differences in their surface composition and/or degree of alteration by space weathering effects (such as aging of surface due to interaction of solar wind, micrometeorites impacts, etc). 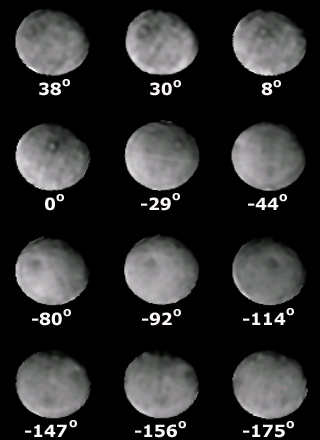 Credit: LESIA\ESO\SwRI\W. M. Keck Observatory - 360 images from the NIRC2 camera on Keck II were used to produce this infrared image of Ceres.

The team also derived measurements of the dimension and shape of the dwarf planet Ceres, which can be considered as an oblate spheroid of radii a=481km and b=447km (incertitude of +/-14 km). The direction of its spin axis in a J2000 coordinate referential is right ascension=287 degrees and declination=69 degrees (5 degrees of incertitude). These two results are in agreements with earlier reports made by Thomas et al. (Nature 2005) from the analysis of Hubble Space Telescope observations.

Additional spatially resolved spectroscopic observations are needed to investigate further the properties of Ceres surface. Such programs will help in the preparation of the NASA DAWN mission, which will reach Ceres in 2015 and explore, from orbit, the properties of this intriguing solar system body. The team is currently planning complementary observations of Ceres during its next opposition in November 2007, using a suite of adaptive optics instruments at the Very Large Telescope of the European Southern Observatory in Chili. 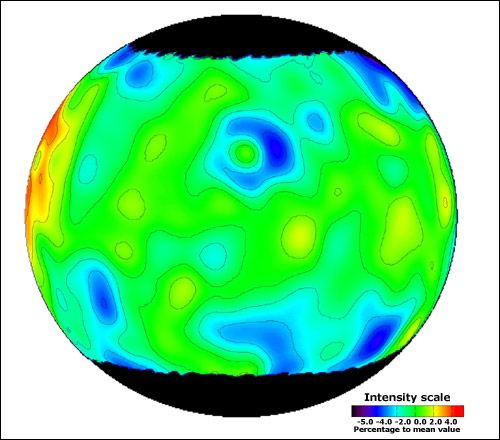 Credit: LESIA\ESO\SwRI\W. M. Keck Observatory - Infrared images of Ceres reveal a textured surface, and astronomers have produced a colour 3D model from the data. The blue in the 3D model corresponds to the dark patches in the infrared, the yellow to the bright. The blackout at the edges is due to insufficient data at the poles.