NEVER look directly at the sun. The transit cannot be seen with the unaided eye. To view the transit, see the assistance of an experienced observer with a telescope and the proper filter.

It was a Frenchman, Pierre Gassendi, who first observed the transit of Mercury. But it's thanks to a German astronomer, Johannes Kepler, that Gassendi knew when to look for it.

The next transit of Mercury happens Wednesday afternoon, November 8, 2006. You'll need a telescope with a special filter to view it safely. Astronomy clubs around the country are preparing to share this unusual sight with their communities.

The transit of Mercury takes place when the planet crosses between the sun and the Earth. Mercury is seen as a small black dot moving across the face of the sun. This phenomenon occurs about 13 times during each century.

The transit cannot be seen with the unaided eye, but it can be viewed with a telescope (with the proper filter) or with a homemade optical projector.

Appropriately, NASA has named a forthcoming planet-finding mission after Kepler, who discovered the laws of planetary motion four centuries ago. Kepler is a space telescope designed to determine if terrestrial planets - like the one we live on - are common or rare in the galaxy.

"The Mercury transit, I think, reminds us that we live in a family of planets that orbit our stars," said Jim Fanson, Kepler deputy project manager. "This method of seeing a planet transit, that is, pass between us and the sun and cover part of the sun's disc, this is exactly the method that the Kepler mission is going to use to find planets around other stars." 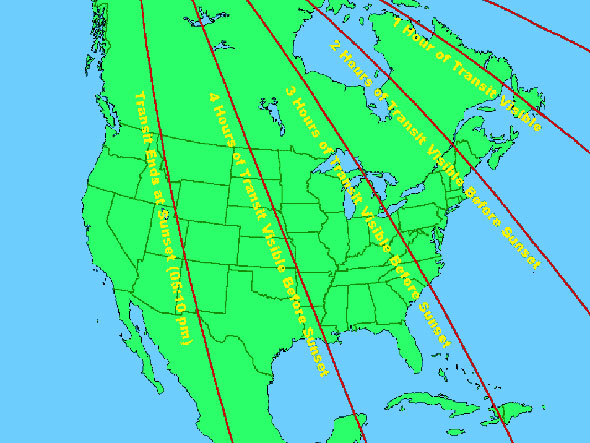 Scheduled for launch in 2008, Kepler will stare at one portion of the night sky and monitor the brightness of 100,000 stars, watching for planetary transits. Each transit will cause the star to dim slightly in brightness. That's a signal that a planet is passing between Earth and the distant star, just as Mercury will pass between Earth and a very nearby star - the sun - on November 8.

William Borucki of NASA Ames Research Center, principal investigator for Kepler, calls the mission a first step in determining the extent of life in our galaxy. "Kepler is unique in that it's an exploration mission," Borucki said. "It has the ability to look at these 100,000 stars. If most of these stars have planets, we would find hundreds of planets in the habitable zone. And if we find that, life may be ubiquitous in the galaxy. If we don't, we might be alone."

The habitable zone is the region around a star where it's not too hot, and not too cold, for liquid water to exist on a planet's surface. And scientists believe liquid water is a prerequisite for life as we know it to emerge.

Kepler is only the first step in NASA's long-range quest for new worlds. Other missions that NASA has in the planning stages, like the SIM PlanetQuest and Terrestrial Planet Finder, will be able to detect Earthlike planets around the nearest stars and then take a "family portraits" where we can see these planets orbiting and measure their atmospheres. "Then, we'll be able to make very profound conclusions or inferences about the habitability of those planets," Fanson said.