McGregor TX Space Exploration Technologies Corp. (SpaceX) conducted the first three-engine firing of its Falcon 9 medium to heavy lift rocket at its Texas Test Facility outside McGregor, on March 8, 2008. At full power the engines generated over 270,000 pounds of force, and consumed 1,050 lbs of fuel and liquid oxygen per second. This three-engine test again sets the record as the most powerful test yet on the towering 235-foot tall test stand. A total of nine Merlin 1C engines will power the Falcon 9 rocket.

The test series continues with the addition of two engines for a total of five, then finally the full compliment of nine engines. With all engines firing, the Falcon 9 can generate over one million pounds of thrust in vacuum - four times the maximum thrust of a 747 aircraft.

"The incremental approach to testing allows us to closely observe how each additional engine influences the entire system," said Tom Mueller, Vice President of Propulsion for SpaceX. "This ensures that we obtain as much data, knowledge and experience as possible as we approach the full nine engine configuration. To date we have not encountered any unexpected interactions between the engines."

The first Falcon 9 remains on-schedule for delivery to the SpaceX launch site at Space Launch Complex 40, Cape Canaveral, Florida, by the end of 2008.

SpaceX is developing a family of launch vehicles intended to increase the reliability and reduce the cost of both manned and unmanned space transportation, ultimately by a factor of ten. With its Falcon line of launch vehicles, powered by the internally developed Merlin engines, SpaceX is able to offer light, medium and heavy lift capabilities to deliver spacecraft into any inclination and altitude, from low Earth orbit to geosynchronous orbit to planetary missions.

As winner of the NASA Commercial Orbital Transportation Services competition, SpaceX will conduct three flights of its Falcon 9 launch vehicle and Dragon spacecraft for NASA. This will culminate in Dragon berthing with the International Space Station and returning safely to Earth. Falcon 9/Dragon will have the opportunity to provide crew and supply services to the Space Station, and fill the gap in US resupply capability when the Shuttle retires in 2010.

Click on image to play video - best to turn the volume all the way up. 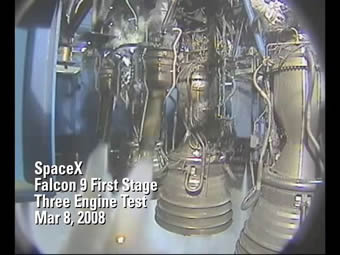 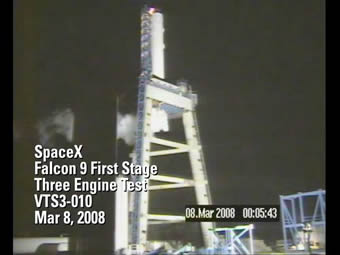