Tiny microbes beneath the sea floor, distinct from life on the Earth's surface, may account for one-tenth of the Earth's living biomass, according to an interdisciplinary team of researchers, but many of these minute creatures are living on a geologic timescale. "Our first study, back in 2006, made some estimates that the cells could double every 100 to 2,000 years," says Jennifer F. Biddle, PhD. recipient in biochemistry and former postdoctoral fellow in geosciences, Penn State. Biddle is now a postdoctoral associate at the University of North Carolina, Chapel Hill.

The researchers looked at sediment samples from a variety of depths taken off the coast of Peru at Ocean Drilling Site 1229. They report their findings in today's (July 22) online issue of the Proceedings of the National Academy of Sciences.

"The Peruvian Margin is one of the most active surface waters in the world and lots of organic matter is continuously being deposited there," says Christopher H. House, associate professor of geoscience. "We are interested in how the microbial world differs in the subsea floor from that in the surface waters. " The researchers used a metagenomic approach to determine the types of microbes residing in the sediment 3 feet, 53 feet, 105 feet and 164 feet beneath the ocean floor. The use of the metagenomics, where bulk samples of sediment are sequences without separation, allows recognition of unknown organism and determination of the composition of the ecosystem.

"The results show that this subsurface environment is the most unique environment yet studied metagenomic approach known today," says House. "The world does look very different below the sediment surface." He notes that a small number of buried genetic fragments exist from the water above, but that a large portion of the microbes found are distinct and adapted to their dark and quiet world. 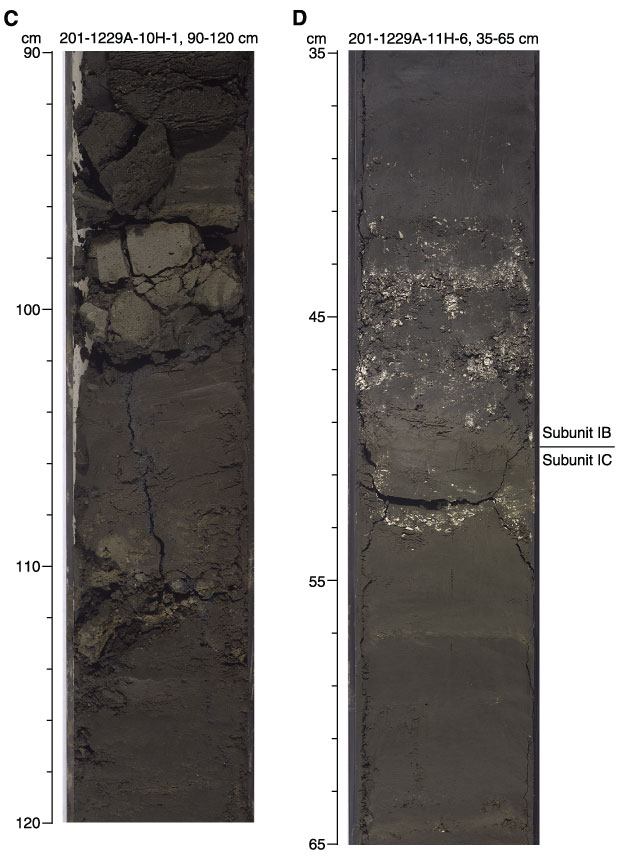 The researchers, who included Biddle; House; Stephan C. Schuster, associate professor; and Jean E. Brenchley, professor, biochemistry and molecular biology, Penn State; and Sorel Fitz-Gibbon, assistant research molecular biologist at the Center for Astrobiology, UCLA, found that a large percentage of the microbes were Archaea, single-celled organisms that look like Bacteria but are different on the metabolic and genetic levels. The percentage of Archaea increases with depth so that at 164 feet below the sea floor, perhaps 90 percent of the microbes are Archaea. The total number of organisms decreases with depth, but there are lots of cells, perhaps as many as 1,600 million cells in each cubic inch.

" These microbes influence the Earth's long-term carbon cycle and also these microbes may be quite ancient," says Biddle.

If the rest of the world is like the Peruvian Margin, then at least one tenth and as much as a third of the Earth's biomass could be these tiny microbes living in the mud. However, this population lives at an unusual rate. Single-celled organisms usually consume food for energy and then rather than grow larger, simply divide and reproduce themselves. While the Bacteria Escherichia Coli, as an example, doubles its numbers every 20 minutes, these Archaea double on the order of hundreds or thousands of years and consume very little energy.

"In essence, these microbes are almost, practically dead by our normal standards," says House. "They metabolize a little, but not much."

According to House, organisms metabolizing at such slow rates is what we could expect to find in other areas of our solar system because such environments have much less energy available than on Earth. Perhaps, similar organisms may be in hydrothermal vents beneath the ice of Europa -- the second moon of Jupiter -- or in subsurface aquifers of Mars.

"We do not expect the microbes in other places to be these microbes exactly," says House. "But, they could be living at a similar slow rate."

Biddle notes that these microbes could survive major Earth impacts by asteroids, so the subsea floor could be a refuge for life during extinction events. Now this study shows they may be a reservoir of novel genetic material as well. Her future research will focus on understanding the lifestyle of the microbes.

"For example, how do they die?" asks Biddle. "It is a simple question that we cannot answer." The National Science Foundation, the NASA Astrobiology Institute, U.S. Department of Energy and Pa. Department of Health supported this work.