In this image released by XCOR, The lynx engine is shown running for the first time at XCOR's test facilities at the Mojave Air and Space Port in Mojave, CA.

December 17, 2008, Mojave, CA: XCOR Aerospace, Inc., announced today that it has successfully completed its first test fire of the rocket engine that will be used to power its Lynx suborbital launch vehicle to the edge of space.

The new engine, designated the 5K18, produces between 2500-2900 lbf thrust by burning a mixture of liquid oxygen and kerosene. The engine was fired Monday, December 15th, 2008 at XCOR's rocket test facility located at the Mojave Air and Space Port. The first test of the engine was performed using pressure-fed propellants whereas the final version of the engine will be fed using XCOR's proprietary cryogenic piston pump for liquid oxygen and a similar piston pump for kerosene.

"Today's successful hot fire marks an important step forward in building the Lynx," said XCOR CEO Jeff Greason. "The 5K18 builds on our previous experience in designing and building reliable, durable and fully reusable rocket engines from 15 lbf thrust up to 7500 lbf, that will make it possible to provide affordable access to space."

During its nine years of existence, XCOR has conducted over 3,600 hot fires of rocket engines. During this time, XCOR has built, test-fired, and flown many different engines. The 5K18 is the eleventh engine design XCOR has built and fired. All have had perfect safety records. XCOR has not had a single lost time injury due to engine operations during its nine years of existence. It has also never seen one of its engines wear out, which is in marked contrast with the experience of most of the aerospace industry. XCOR's experience also includes building rocket-powered vehicles. The company has already developed and safely flown two generations of rocket-powered aircraft. Overall, the firm has flown these vehicles 66 times, and XCOR alone accounts for more than half of all manned rocket-powered flights in the 21st century. The Lynx will mark the company's third rocket-powered vehicle, and the first designed for space access. 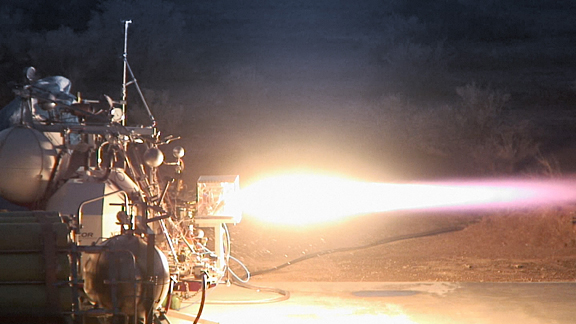 "Firing a new rocket engine is always an important milestone," said COO Andrew Nelson. "It gives everyone on the team a tremendous sense of accomplishment and demonstrates to customers and investors that XCOR knows how to take new ideas and make them a reality."

"The propulsion system is not only the hardest part of the launcher to design and build, it also determines every other aspect of the vehicle," said XCOR CEO Jeff Greason. "The engine's power and the amount and types of propellants it consumes determine the design and capabilities of the vehicle. There are examples in the aerospace industry where unforeseen problems forced a change of engines which then resulted in extensive redesigns of entire vehicles. By getting our rocket engines right from the beginning, XCOR reduces this type of risk."

"XCOR's revolutionary rocket engines are the heart of our vehicle design," Nelson states. "They are a disruptive technology in the space launch industry because they make it possible to deliver payloads with much higher reliability, significantly shorter lead times and dramatically lower operating costs. Our safety-enhanced engines are also easier on the environment. They will make the Lynx a game-changer in the space launch industry."

The Lynx will use four of the 5K18 engines to carry people or payloads to the edge of space. Earlier this month, XCOR announced that RocketShip Tours, of Phoenix, AZ, has begun sales of tickets for suborbital flights on the Lynx. Tickets will sell for $95,000. RocketShip Tours can be contacted via its website: www.RocketShipTours.com or phoned toll free at: 888-778-6877.

XCOR Aerospace is a California corporation located in Mojave, California. The company is in the business of developing and producing safe, reliable and reusable rocket-powered vehicles and propulsion systems that enable affordable access to space. Visit our website at http://www.xcor.com/