WASHINGTON -- NASA and the Challenger Center for Space Science Education have selected the winner of the Antarctic habitat naming contest. The name "Resolution" took top honors in the "Name that Habitat" competition. The winning name was submitted by 9th grade students at Holy Cross High School in Delran, N.J.

The exploration vessel Resolution was the first ship to cross the Antarctic Circle in January 1773 and was under the command of Captain James Cook. Holy Cross students said the new habitat represents an advance in technology, much as Cook's ship did. The students also pointed out that the word "resolution" aptly describes America's intent to explore space.

The contest, which began in the fall of 2008, gave students in the sixth through tenth grades the opportunity to submit entries to name an inflatable habitat designed to serve as a trailblazer for new construction methods on Earth and other worlds. NASA unveiled the inflatable habitat in November 2007. It is scheduled to be disassembled and returned to the United States later this month.

The development and deployment of the habitat was funded through NASA's Innovative Partnership Program's Seed Fund initiative, with in-kind resource contributions by the National Science Foundation and ILC Dover of Frederica, Del., the manufacturer of the structure.

The "Name that Habitat" contest was conducted through a Space Act Agreement between NASA and the Challenger Center for Space Science Education. It continues NASA's tradition of investing in the nation's education programs and is directly tied to the agency's education goal of engaging Americans in NASA's mission. NASA is committed to building strategic partnerships and links between science, technology, engineering and mathematics education providers. Through hands-on, interactive educational activities, NASA is engaging students, educators, families, the public and agency stakeholders to increase Americans' science and technology literacy. 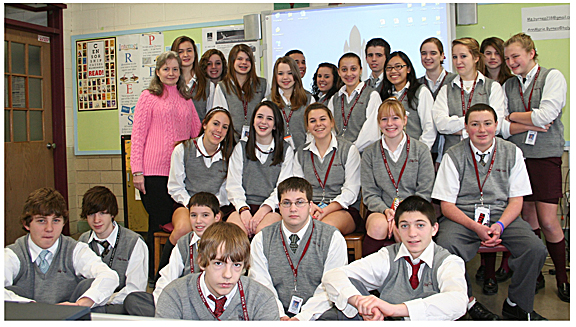 Image: Teacher AnnMarie Byrnes and the Honors English I class at Holy Cross High School in Delran, N.J. that submitted the winning entry "Resolution" for the NASA/Challenger Center competition to name NASA's inflatable Antarctic habitat in January 2009. Click on Image to enlarge.

The Challenger Center for Space Science Education is an international, nonprofit educational organization founded in 1986 by the families of the astronauts lost during the final flight of the space shuttle Challenger. The goal of the organization is to foster student interest in careers in science, technology, engineering and mathematics.

For information about the Challenger Center for Space Science Education, visit:

For information about NASA and agency programs, visit: