WASHINGTON -- Using a NASA radar flying aboard India's Chandrayaan-1 spacecraft, scientists are getting their first look inside the moon's coldest, darkest craters.

The Mini-SAR instrument, a lightweight, synthetic aperture radar, has passed its initial in-flight tests and sent back its first data. The images show the floors of permanently-shadowed polar craters on the moon that aren't visible from Earth. Scientists are using the instrument to map and search the insides of the craters for water ice. "The only way to explore such areas is to use an orbital imaging radar such as Mini-SAR," said Benjamin Bussey, deputy principal investigator for Mini-SAR, from the Johns Hopkins University Applied Physics Laboratory in Laurel, Md. "This is an exciting first step for the team which has worked diligently for more than three years to get to this point." 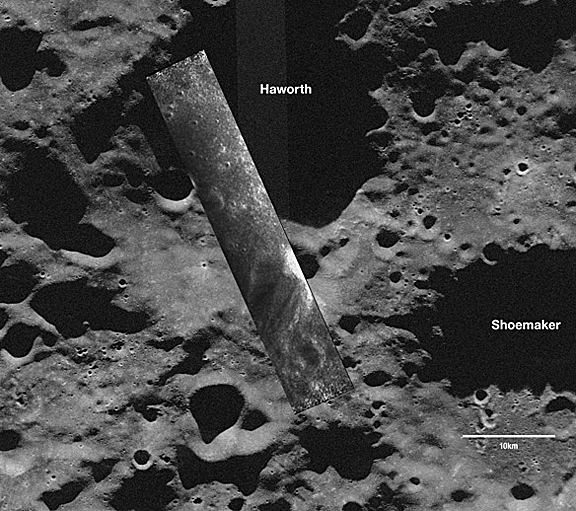 Click to view large image (572 kb) This image is a Mini-RF synthetic aperture radar (SAR) strip overlain on an Earth-based, Arecibo Observatory radar telescope image. Taken Nov. 17, 2008, the south-polar SAR strip shows a part of the moon never seen before: a portion of Haworth crater that is permanently shadowed from Earth and the sun. The only way to explore these regions is by using an orbital radar such as Mini-RF. Over the coming year of Chandrayaan-1 operations, Mini-RF (also known as Mini-SAR) will map both polar regions to look for water ice. The spacecraft acquired these data from a 100-kilometer (62-mile) polar orbit; they reveal features as small as approximately 150 meters (490 feet) across. Bright areas represent surface roughness or slopes pointing toward the spacecraft. The data cover an area approximately 50 kilometers (31 miles) by 18 kilometers (11 miles). Credit: ISRO/NASA/JHUAPL/LPI/Cornell University/Smithsonian

Click to view larger image. (228 kb) These synthetic aperture radar (SAR) images of the lunar surface were taken by the Mini-RF instrument on the Indian Space Research Organisation's Chandrayaan-1 spacecraft on Nov. 17, 2008, and are the first data taken by this instrument (also known as Mini-SAR). The spacecraft acquired these data from a 100-kilometer (62-mile) polar orbit and reveal features as small as approximately 150 meters (490 feet) across. Bright areas represent surface roughness or slopes pointing toward the spacecraft. The two north-polar strips have been mosaicked to show the western rim of Seares crater. The mosaic covers an area roughly 80 kilometers (50 miles) long by 20 kilometers (12.5 miles) wide. Credit: ISRO/NASA/JHUAPL/LPI

"During the next few months we expect to have a fully calibrated and operational instrument collecting valuable science data at the moon," said Jason Crusan, program executive for the Mini-RF Program for NASA's Space Operations Mission Directorate in Washington.

Mini-SAR is one of 11 instruments on the Indian Space Research Organization's Chandrayaan-1 and one of two NASA-sponsored contributions to its international payload. The other is the Moon Mineralogy Mapper, a state-of-the-art imaging spectrometer that will provide the first map of the entire lunar surface at high spatial and spectral resolution. Data from the two NASA instruments will contribute to the agency's increased understanding of the lunar environment as it implements America's space exploration plan, which calls for robotic and human missions to the moon.

Chandrayaan-1 launched from India's Satish Dhawan Space Center on Oct. 21 and began orbiting the moon Nov. 8. The Applied Physics Laboratory performed the final integration and testing on Mini-SAR. It was developed and built by the Naval Air Warfare Center and several other commercial and government contributors. The Applied Physics Laboratory's Satellite Communications Facility is Chandrayaan-1's primary ground station in the Western Hemisphere.

For more information about the Moon Mineralogy Mapper, visit: http://m3.jpl.nasa.gov