Recent images of Titan from NASA's Cassini spacecraft affirm the presence of lakes of liquid hydrocarbons by capturing changes in the lakes brought on by rainfall.

For several years, Cassini scientists have suspected that dark areas near the north and south poles of Saturn's largest satellite might be liquid-filled lakes. An analysis published today in the journal Geophysical Research Letters of recent pictures of Titan's south polar region reveals new lake features not seen in images of the same region taken a year earlier. The presence of extensive cloud systems covering the area in the intervening year suggests that the new lakes could be the result of a large rainstorm and that some lakes may thus owe their presence, size and distribution across Titan's surface to the moon's weather and changing seasons.

The high-resolution cameras of Cassini's Imaging Science Subsystem (ISS) have now surveyed nearly all of Titan's surface at a global scale. An updated Titan map, being released today by the Cassini Imaging Team, includes the first near-infrared images of the leading hemisphere portion of Titan's northern "lake district" captured on Aug. 15-16, 2008. (The leading hemisphere of a moon is that which always points in the direction of motion as the moon orbits the planet.) These ISS images complement existing high-resolution data from Cassini's Visible and Infrared Mapping Spectrometer (VIMS) and RADAR instruments.

However, evaporation from these large surface reservoirs is not great enough to replenish the methane lost from the atmosphere by rainfall and by the formation and eventual deposition on the surface of methane-derived haze particles.

"A recent study suggested that there's not enough liquid methane on Titan's surface to resupply the atmosphere over long geologic timescales," said Dr. Elizabeth Turtle, Cassini imaging team associate at the Johns Hopkins University Applied Physics Lab in Laurel, Md., and lead author of today's publication. "Our new map provides more coverage of Titan's poles, but even if all of the features we see there were filled with liquid methane, there's still not enough to sustain the atmosphere for more than 10 million years."

Titan is the only satellite in the solar system with a thick atmosphere in which a complex organic chemistry occurs. "It's unique," Turtle said. "How long Titan's atmosphere has existed or can continue to exist is still an open question."

That question and others related to the moon's meteorology and its seasonal cycles may be better explained by the distribution of liquids on the surface. Scientists also are investigating why liquids collect at the poles rather than low latitudes, where dunes are common instead.

"Titan's tropics may be fairly dry because they only experience brief episodes of rainfall in the spring and fall as peak sunlight shifts between the hemispheres," said Dr. Tony DelGenio of NASA's Goddard Institute for Space Studies in New York, a co-author and a member of the Cassini imaging team. "It will be interesting to find out whether or not clouds and temporary lakes form near the equator in the next few years."

Titan and the transformations on its surface brought about by the changing seasons will continue to be a major target of investigation throughout Cassini's Equinox mission. The Titan map and images of the lakes are available at: http://ciclops.org, http://saturn.jpl.nasa.gov , and http://www.nasa.gov/cassini .

The Cassini-Huygens mission is a cooperative project of NASA, the European Space Agency and the Italian Space Agency. The Jet Propulsion Laboratory (JPL), a division of the California Institute of Technology in Pasadena, manages the Cassini-Huygens mission for NASA's Science Mission Directorate, Washington. The Cassini orbiter and its two onboard cameras were designed, developed and assembled at JPL. The imaging team consists of scientists from the U.S., England, France, and Germany. The imaging operations center and team leader (Dr. C. Porco) are based at the Space Science Institute in Boulder, Colo. The Applied Physics Laboratory, a division of Johns Hopkins University, meets critical national challenges through the innovative application of science and technology. 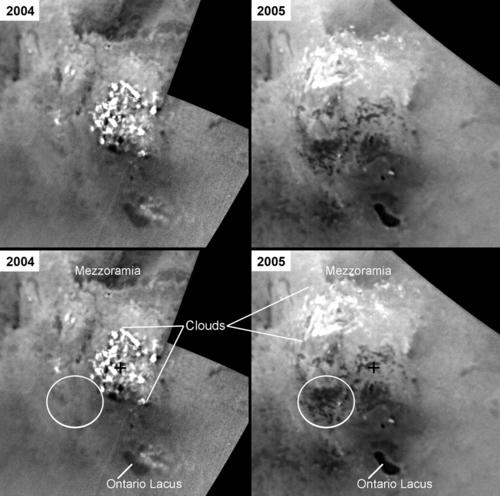 These mosaics of the south pole of Saturn's moon Titan, made from images taken almost one year apart, show changes in dark areas that may be lakes filled by seasonal rains of liquid hydrocarbons.

The images on the left (unlabeled at top and labeled at bottom) were acquired July 3, 2004. Those on the right were taken June 6, 2005. In the 2005 images, new dark areas are visible and have been circled in the labeled version. The very bright features are clouds in the lower atmosphere (the troposphere). Titan's clouds behave similarly to those on Earth, changing rapidly on timescales of hours and appearing in different places from day to day. During the year that elapsed between these two observations, clouds were frequently observed at Titan's south pole by observers on Earth and by Cassini's imaging science subsystem (see South Polar Cloud Movie ).

It is likely that rain from a large storm created the new dark areas that were observed in June 2005. Some features, such as Ontario Lacus, show differences in brightness between the two observations that are the result of differences in illumination between the two observations. These mosaics use images taken in infrared light at a wavelength of 938 nanometers. The images have been oriented with the south pole in the center (black cross) and the 0 degree meridian toward the top. Image resolutions are several kilometers (several miles) per pixel. 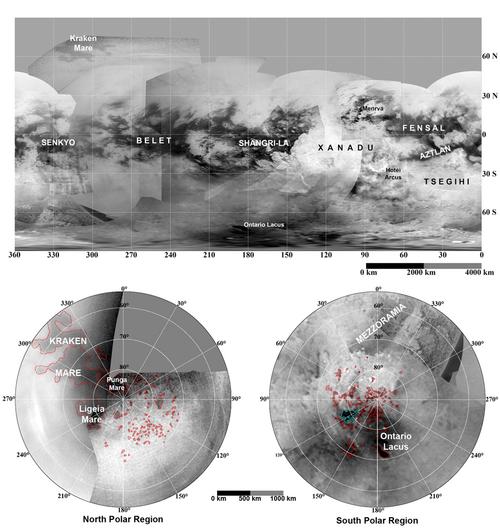 These updated maps of Saturn's moon Titan, consisting of data from the Cassini imaging science subsystem, include Cassini's August 2008 imaging of the moon's northern hemisphere. Evidence from Cassini's imaging science subsystem, radar, and visual and infrared mapping spectrometer instruments strongly suggests that dark areas near the poles are lakes of liquid hydrocarbons-an analysis affirmed by images capturing those changes in the lakes thought to be brought on by rainfall.

Colored lines in the polar portions of these maps illustrate the boundaries between surface regions having different albedos -- or differences in surface brightness -- which Cassini scientists have interpreted as potential shorelines. Blue outlines indicate features that changed between observations made one year apart (see Changes in Titan's Lakes).

The maps are compiled from images dating from April 2004 through August 2008, and their resolutions vary from a few meters to a few tens of kilometers per pixel. Brightness variations are due to differences in surface albedo rather than topographic shading.