NASA's Glenn Research Center is leading a team of industry and university partners in demonstrating a prototype of a commercial hydrogen fueling station that uses wind and solar power to produce hydrogen from water. This initial installation will produce hydrogen from Lake Erie water to fuel a mass transit bus powered by fuel cells.

The demonstration, featuring a unique, high-capacity electrolyzer that separates water into its elemental components of hydrogen and oxygen, is part of an economic development program in the Cleveland area. Local workers will design and build the electrolyzer using commercially available components.

"The project is more than a key technology demonstration," said project team member Valerie Lyons, chief of Glenn's Power and In-Space Propulsion Division. "It will be a great educational tool for the public and will serve as a catalyst to inspire new ideas and initiatives that can generate many new jobs and manufacturing opportunities in Ohio." 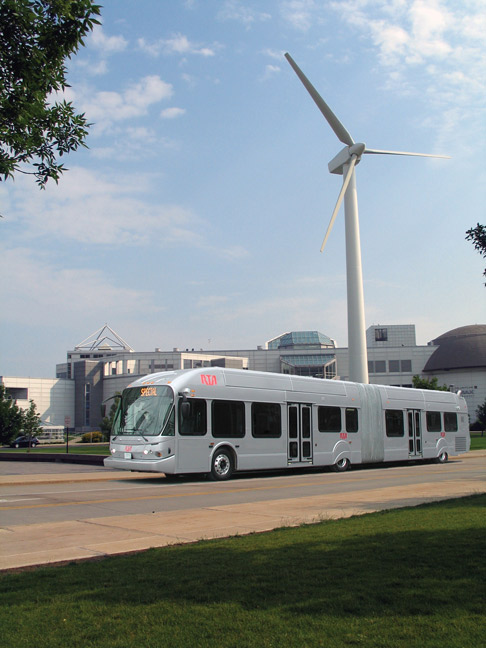 The hydrogen fueling station will be located in downtown Cleveland at the Great Lakes Science Center on the south shore of Lake Erie, where it can be powered from the science center's existing wind and solar power sources. The fueling station will generate hydrogen from Lake Erie water for use in a Greater Cleveland Regional Transit Authority bus powered by fuel cells. The transit authority will operate the bus in revenue service.

Cleveland State University's Nance College of Business Administration will work alongside the collaborators to develop a business template for the electrolyzer and station. The designs for both will be treated as intellectual property and placed in a trust benefiting Ohio citizens.

The build-up of the electrolyzer, a major step toward the reality of the fueling station, is funded by the Ohio Aerospace Institute through a $310,000 grant from The Cleveland Foundation. The initial funding is $110,000, with an additional $200,000 to be provided for milestone progress.

Other collaborators include Hydrogen and Fuel Cell Consultants of Brecksville, Ohio; the Center for Automotive Research and Technology Management at Ohio State University in Columbus, Ohio; Parker Hannifin of Cleveland; Sierra Lobo of Milan, Ohio; Hamilton Sundstrand of Windsor Locks, Conn.; the University of Toledo; and the Earth Day Coalition of Cleveland.