Scientists from the Max Planck Institute for Radio Astronomy (MPIfR) in Bonn, Germany, Cornell University, USA, and the University of Cologne, Germany, have detected two of the most complex molecules yet discovered in interstellar space: ethyl formate and n-propyl cyanide. Their computational models of interstellar chemistry also indicate that yet larger organic molecules may be present -- including the so-far elusive amino acids, which are essential for life.

The results will be presented at the European Week of Astronomy and Space Science at the University of Hertfordshire on Tuesday 21st April.

The IRAM 30 m telescope in Spain was used to detect emission from molecules in the star-forming region Sagittarius B2, close to the centre of our galaxy. The two new molecules were detected in a hot, dense cloud of gas known as the “Large Molecule Heimat”, which contains a luminous newly-formed star. Large, organic molecules of many different sorts have been detected in this cloud in the past, including alcohols, aldehydes, and acids. The new molecules ethyl formate (C2H5OCHO) and n-propyl cyanide (C3H7CN) represent two different classes of molecule -- esters and alkyl cyanides -- and they are the most complex of their kind yet detected in interstellar space.

Atoms and molecules emit radiation at very specific frequencies, which appear as characteristic “lines” in the electromagnetic spectrum of an astronomical source. Recognizing the signature of a molecule in that spectrum is rather like identifying a human fingerprint. 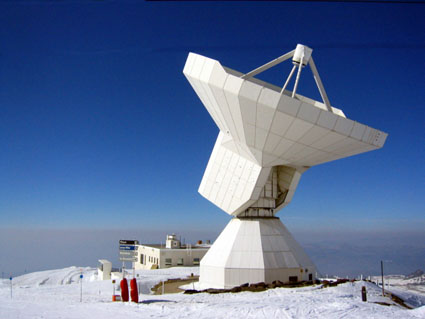 "The difficulty in searching for complex molecules is that the best astronomical sources contain so many different molecules that their "fingerprints" overlap, and are difficult to disentangle" says Arnaud Belloche, scientist at the Max Planck institute and first author of the research paper. "Larger molecules are even more difficult to identify because their "fingerprints" are barely visible: their radiation is distributed over many more lines that are much weaker" adds Holger Mueller, researcher at the University of Cologne. Out of 3700 spectral lines detected with the IRAM telescope, the team identified 36 lines belonging to the two new molecules.

The researchers then used a computational model to understand the chemical processes that allow these and other molecules to form in space. Chemical reactions can take place as the result of collisions between gaseous particles; but there are also small grains of dust suspended in the interstellar gas, and these grains can be used as landing sites for atoms to meet and react, producing molecules. As a result, the grains build up thick layers of ice, composed mainly of water, but also containing a number of basic organic molecules like methanol, the simplest alcohol.

"But," says Robin Garrod, a researcher in astrochemistry at Cornell University, "the really large molecules don’t seem to build up this way, atom by atom." Rather, the computational models suggest that the more complex molecules form section by section, using pre-formed building blocks that are provided by molecules, such as methanol, that are already present on the dust grains. The computational models show that these sections, or "functional groups", can add together efficiently, building up a molecular "chain" in a series of short steps. The two newly-discovered molecules seem to be produced in this way.

Adds Garrod, "There is no apparent limit to the size of molecules that can be formed by this process -- so there’s good reason to expect even more complex organic molecules to be there, if we can detect them."

Senior MPIfR team member Karl Menten thinks that this will happen in the near future: "What we are doing now is like searching for a needle in a haystack. Future instruments like the Atacama Large Millimeter Array will allow much more efficient studies to discover organic interstellar molecules." These may even include amino acids, which are required for the production of proteins, and are therefore essential to life on Earth.

The simplest amino acid, glycine (NH2CH2COOH), has been looked for in the past, but has not been successfully detected. However, the size and complexity of this molecule is matched by the two new molecules discovered by the team (Astronomy & Astrophysics, in press). 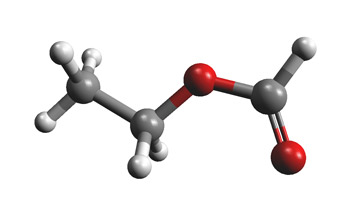 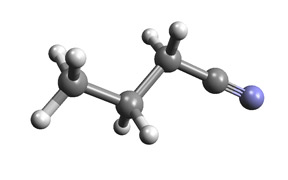 Reference list of all 150 molecules presently known in space: http://www.astro.uni-koeln.de/cdms/molecules.