Astronomers using the United Kingdom Infrared Telescope (UKIRT) in Hawaii, the IRAM Millimeter-wave Telescope in Spain, and the Spitzer Space Telescope in orbit above the Earth, have completed the most wide-ranging census ever produced of dynamical star formation in and around the well-known Great Nebula of Orion. They have found this stellar nursery to be a lively and somewhat overcrowded place, with young stars emitting gas jets in all directions, creating quite a chaotic picture. There is much more going on in Orion than previously thought.

The research team comprises more than a dozen astronomers from the US, the UK and a number of other European countries. The project thus has a truly international flavor, representing a collaboration of minds from across the globe. A number of them are in Hertfordshire in the UK this week to share their discoveries with colleagues at this year’s annual National Astronomy Meeting of the UK (NAM 2009).

Take a look at the constellation of Orion at night. With the naked eye you see only the brightest stars, like Betelgeuse and Rigel at the shoulder and knee of the constellation, or perhaps the Orion Nebula as a vaguely fuzzy patch around the sword. What your eye does not see is an enormous cloud of molecules and dust particles that hide a vast region where young stars are currently being born. On the sky, the region -- known to astronomers as the Orion Molecular Cloud -- is more than 20 times the angular size of the full moon, spanning from far above the hunter's head to far below his feet. It is one of the most intense regions of star formation in the local Milky Way and has been the subject of many small-scale studies over the years. However, the current work is the first to present such a complete study of the young stars, the cloud of gas and dust from which they are being born, and the spectacular supersonic jets of hydrogen molecules being launched from the poles of each star. 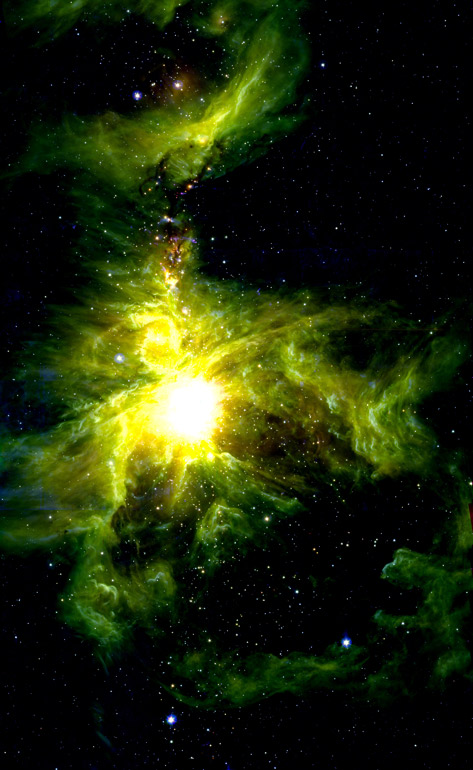 This spectacular image combines observations from the United Kingdom Infrared Telescope and the Spitzer Space Telescope. It shows just a small portion of the region surveyed. In this figure, parts of the Orion Molecular cloud are illuminated by nearby stars and therefore glow an eerie green colour. The jets punch through the cloud and can be seen as a multitude of tiny pink-purple arcs, knots and filaments. The young stars that drive the jets are usually found along each jet and are coloured golden orange. Credit: UKIRT/JAC, Spitzer Telescope.

Most of the "action" is hidden from view in visible light, because the molecular cloud is very thick and opaque. Only the Orion nebula, which is really just a blister on the surface of the cloud, gives an indication of what is really happening within. To see through the cloud, we need to observe at wavelengths beyond the reach of the human eye. The longer (or "redder") the wavelength, the better! Thus, the team have used UKIRT on Mauna Kea, the Spitzer Space Telescope, which works at even longer "mid-infrared" wavelengths, and the IRAM radio telescope, which operates beyond the infrared at short radio wavelengths.

The key to the success of this project was the combination of data from all three facilities. Inspired by the richness of his images from UKIRT, Chris Davis contacted colleagues in Europe and on the U.S. Mainland. Tom Megeath, an astronomer from the University of Toledo, provided a catalogue of the positions of the very youngest stars – sources revealed only recently by the Spitzer Space Telescope. Thomas Stanke, a researcher based at the European Southern Observatory in Garching, Germany, then provided extensive IRAM maps of the molecular gas and dust across the Orion cloud. Dirk Froebrich, a lecturer at the University of Kent, later used archival images from the Calar Alto Observatory in Spain (data acquired by Stanke some 10 years ago) to measure the speeds and directions of a large number of jets by comparing them with their positions in the new images. Armed with these data, Davis was able to match the jets up to the young stars that drive them, as well as to density peaks within the cloud – the natal cores from which each star is being created. 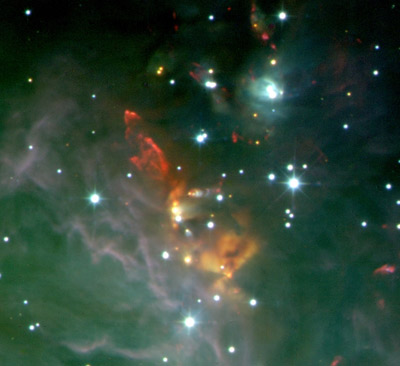 A close-up view of a spectacular jet (seen in red) popping out of a busy region of star formation in Orion. All of the red wisps, knots and filaments are in fact associated with jets from young stars, which in this figure are coloured orange. These data were acquired with the Wide Field Camera (WFCAM) at the United Kingdom Infrared Telescope. Credit: UKIRT/JAC.

Dr Davis says, "regions like this are usually referred to as stellar nurseries, but we have shown that this one is not being well run: it is chaotic and seriously overcrowded. Using UKIRT's wide field camera (WFCAM), we now know of more than 110 individual jets from this one region of the Milky Way. Each jet is traveling at tens or even hundreds of miles per second; the jets extend across many trillions of miles of interstellar space. Even so, we have been able to pinpoint the young stars that drive most of them."

Dr Froebrich mentions that, "measuring the speeds and directions of the jets is essential to pinpoint the driving sources, especially in such crowded regions as M42 in Orion."

Dr Megeath adds, "with such a large number of young stars, we can study the "demographics" of star birth. This study will give us an idea of how long it takes baby stars to bulk up by pulling in gas from the surrounding cloud, what ultimately stops a star from growing bigger, and how a star’s birth is influenced by other stars in the stellar nursery."

Dr Stanke notes, "Star formation research is fundamental to our understanding of how our own sun, and the planets that orbit it, were created. Many of the stars currently being born in Orion will evolve to be just like the sun. Some may even have earth-like planets associated with them."

Dr Andy Adamson, Associate Director at the UKIRT, says, "This spectacular dataset demonstrates the power of survey telescopes like UKIRT. With on-line access to data from other telescopes around the world, and the ease with which one can communicate with collaborators across the globe, massive projects like the Orion study are very much the future of astronomy."

Professor Gary Davis, Director UKIRT, and Dr Adamson will present this and other UKIRT science results at the European Week of Astronomy and Space Science (NAM 2009) at the University of Hertfordshire today.