A survey by the Chandra X-ray observatory has revealed in detail, for the first time, the effects of a shock wave blasted through a galaxy by powerful jets of plasma emanating from a supermassive black hole at the galactic core. The observations of Centaurus A, the nearest galaxy that contains these jets, have enabled astronomers to revise dramatically their picture of how jets affect the galaxies in which they live. The results will be presented on Wednesday 22nd April at the European Week of Astronomy and Space Science in Hatfield by Dr. Judith Croston of the University of Hertfordshire.

A team led by Dr. Croston and Dr. Ralph Kraft, of the Harvard-Smithsonian Center for Astrophysics in the USA, used very deep X-ray observations from Chandra to get a new view of the jets in Centaurus A. The jets inflate large bubbles filled with energetic particles, driving a shock wave through the stars and gas of the surrounding galaxy. By analyzing in detail the X-ray emission produced where the supersonically expanding bubble collides with the surrounding galaxy, the team were able to show for the first time that particles are being accelerated to very high energies at the shock front, causing them to produce intense X-ray and gamma-ray radiation. Very high-energy gamma-ray radiation was recently detected from Centaurus A for the first time by another team of researchers using the High Energy Stereoscopic System (HESS) telescope in Namibia. 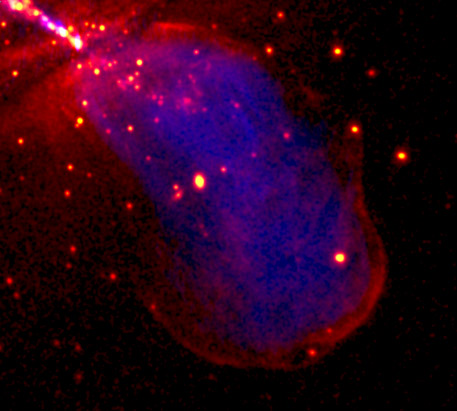 "Although we expect that galaxies with these shock waves are common in the Universe, Centaurus A is the only one close enough to study in such detail," said Dr. Croston. "By understanding the impact that the jet has on the galaxy, its gas and stars, we can hope to understand how important the shock waves are for the life cycles of other, more distant galaxies."

The powerful jets are found in only a small fraction of galaxies but are most common in the largest galaxies, which are thought to have the biggest black holes. The jets are believed to be produced near to a central supermassive black hole, and travel close to the speed of light for distances of up to hundreds of thousands of light years. Recent progress in understanding how galaxies evolve suggests that these jet-driven bubbles, called radio lobes, may play an important part in the life cycle of the largest galaxies in the Universe.

The results of this research will be published in a forthcoming issue of the Monthly Notices of the Royal Astronomical Society.