Using different state-of-the-art techniques on ESO's Very Large Telescope, two independent teams of astronomers have obtained the sharpest ever views of the supergiant star Betelgeuse. They show that the star has a vast plume of gas almost as large as our Solar System and a gigantic bubble boiling on its surface. These discoveries provide important clues to help explain how these mammoths shed material at such a tremendous rate.

Betelgeuse -- the second brightest star in the constellation of Orion (the Hunter) -- is a red supergiant, one of the biggest stars known, and almost 1000 times larger than our Sun [1]. It is also one of the most luminous stars known, emitting more light than 100 000 Suns. Such extreme properties foretell the demise of a short-lived stellar king. With an age of only a few million years, Betelgeuse is already nearing the end of its life and is soon doomed to explode as a supernova. When it does, the supernova should be seen easily from Earth, even in broad daylight.

Red supergiants still hold several unsolved mysteries. One of them is just how these behemoths shed such tremendous quantities of material -- about the mass of the Sun -- in only 10 000 years. Two teams of astronomers have used ESO's Very Large Telescope (VLT) and the most advanced technologies to take a closer look at the gigantic star. Their combined work suggests that an answer to the long-open mass-loss question may well be at hand. 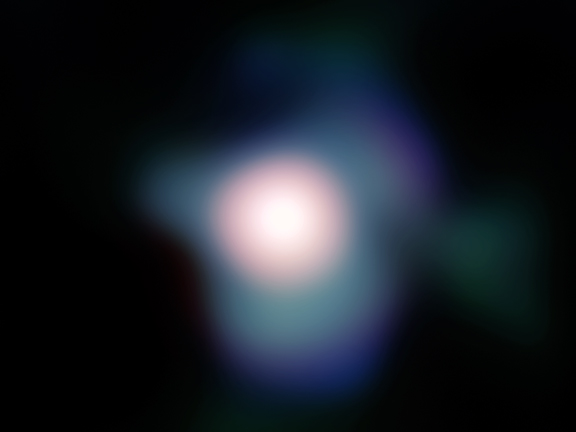 The first team used the adaptive optics instrument, NACO, combined with a so-called "lucky imaging" technique, to obtain the sharpest ever image of Betelgeuse, even with Earth's turbulent, image-distorting atmosphere in the way. With lucky imaging, only the very sharpest exposures are chosen and then combined to form an image much sharper than a single, longer exposure would be.

The resulting NACO images almost reach the theoretical limit of sharpness attainable for an 8-metre telescope. The resolution is as fine as 37 milliarcseconds, which is roughly the size of a tennis ball on the International Space Station (ISS), as seen from the ground.

"Thanks to these outstanding images, we have detected a large plume of gas extending into space from the surface of Betelgeuse," says Pierre Kervella from the Paris Observatory, who led the team. The plume extends to at least six times the diameter of the star, corresponding to the distance between the Sun and Neptune.

"This is a clear indication that the whole outer shell of the star is not shedding matter evenly in all directions," adds Kervella. Two mechanisms could explain this asymmetry. One assumes that the mass loss occurs above the polar caps of the giant star, possibly because of its rotation. The other possibility is that such a plume is generated above large-scale gas motions inside the star, known as convection -- similar to the circulation of water heated in a pot.

To arrive at a solution, astronomers needed to probe the behemoth in still finer detail. To do this Keiichi Ohnaka from the Max Planck Institute for Radio Astronomy in Bonn, Germany, and his colleagues used interferometry. With the AMBER instrument on ESO's Very Large Telescope Interferometer, which combines the light from three 1.8-metre Auxiliary Telescopes of the VLT, the astronomers obtained observations as sharp as those of a giant, virtual 48-metre telescope. With such superb resolution, the astronomers were able to detect indirectly details four times finer still than the amazing NACO images had already allowed (in other words, the size of a marble on the ISS, as seen from the ground).

"Our AMBER observations are the sharpest observations of any kind ever made of Betelgeuse. Moreover, we detected how the gas is moving in different areas of Betelgeuse's surface the first time this has been done for a star other than the Sun", says Ohnaka.

The AMBER observations revealed that the gas in Betelgeuse's atmosphere is moving vigorously up and down, and that these bubbles are as large as the supergiant star itself. Their unrivalled observations have led the astronomers to propose that these large-scale gas motions roiling under Betelgeuse's red surface are behind the ejection of the massive plume into space. 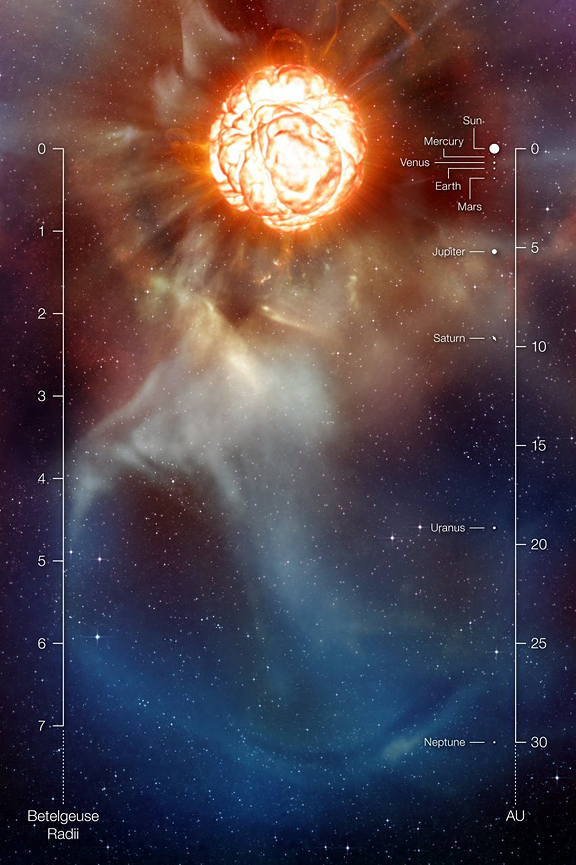 [1] If Betelgeuse were at the centre of our Solar System it would extend out almost to the orbit of Jupiter, engulfing Mercury, Venus, Earth, Mars and the main asteroid belt. More Information

This research was presented in two papers to appear in Astronomy and Astrophysics: The close circumstellar environment of Betelgeuse: Adaptive optics spectro-imaging in the near-IR with VLT/NACO, by Pierre Kervella et al., and Spatially resolving the inhomogeneous structure of the dynamical atmosphere of Betelgeuse with VLTI/AMBER, by Keiichi Ohnaka et al.