Flasks, beakers and hot plates may soon be a thing of the past in chemistry labs. Instead of handling a few experiments on a bench top, scientists may simply pop a microchip into a computer and instantly run thousands of chemical reactions, with results -- literally shrinking the lab down to the size of a thumbnail.

Toward that end, UCLA researchers have developed technology to perform more than a thousand chemical reactions at once on a stamp-size, PC-controlled microchip, which could accelerate the identification of potential drug candidates for treating diseases like cancer.

Their study appears in the Aug. 21 edition of the journal Lab on a Chip and is currently available online.

A team of UCLA chemists, biologists and engineers collaborated on the technology, which is based on microfluidics -- the utilization of miniaturized devices to automatically handle and channel tiny amounts of liquids and chemicals invisible to the eye. The chemical reactions were performed using in situ click chemistry, a technique often used to identify potential drug molecules that bind tightly to protein enzymes to either activate or inhibit an effect in a cell, and were analyzed using mass spectrometry. 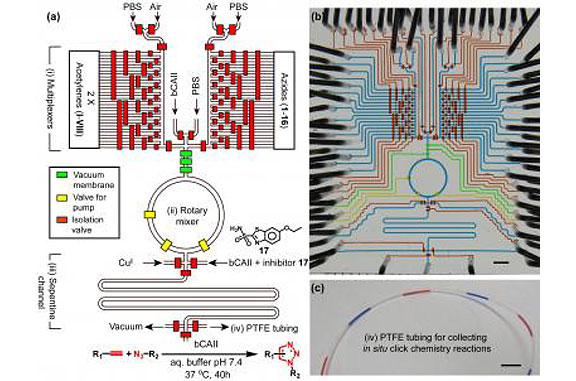 IMAGE: This is the design of the second generation integrated microfluidic device.

While traditionally only a few chemical reactions could be produced on a chip, the research team pioneered a way to instigate multiple reactions, thus offering a new method to quickly screen which drug molecules may work most effectively with a targeted protein enzyme. In this study, scientists produced a chip capable of conducting 1,024 reactions simultaneously, which, in a test system, ably identified potent inhibitors to the enzyme bovine carbonic anhydrase.

A thousand cycles of complex processes, including controlled sampling and mixing of a library of reagents and sequential microchannel rinsing, all took place on the microchip device and were completed in just a few hours. At the moment, the UCLA team is restricted to analyzing the reaction results off-line, but in the future, they intend to automate this aspect of the work as well. 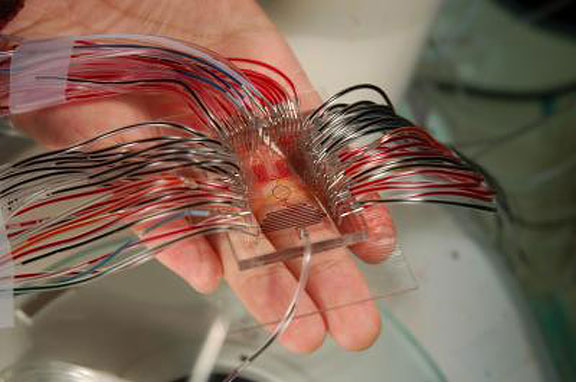 IMAGE: This is a microfluidic device held in the palm of the hand.

"The precious enzyme molecules required for a single in situ click reaction in a traditional lab now can be split into hundreds of duplicates for performing hundreds of reactions in parallel, thus revolutionizing the laboratory process, reducing reagent consumption and accelerating the process for identifying potential drug candidates," said study author Hsian-Rong Tseng, a researcher at UCLA's Crump Institute for Molecular Imaging, an associate professor molecular and medical pharmacology at the David Geffen School of Medicine at UCLA, and a member of the California NanoSystems Institute at UCLA.

Kym F. Faull, director of the Pasarow Mass Spectrometry Lab at UCLA, helped the team with several challenges, including reducing the amount of chemicals needed for reactions on the chip, enhancing test sensitivity and speeding up reaction analysis.

"The system allows researchers to not only test compounds quicker but uses only tiny amounts of materials, which greatly reduces lab time and costs," said Faull, a professor of psychiatry and biobehavioral sciences at the Geffen School of Medicine.

Next steps for the team include exploring the use of this microchip technology for other screening reactions in which chemicals and material samples are in limited supply -- for example, with a class of protein enzymes called kinases, which play critical roles in the malignant transformation of cancer.

According to the researchers, the technology may open up many areas for biological and medicinal study.

The study team relied on work in the UCLA labs of Michael E. Phelps, Norton Simon Professor and chair of molecular and medical pharmacology, and Clifton K.F. Shen, assistant professor of molecular and medical pharmacology. Key research contributors included Yanju Wang, Wei-Yu Lin and Kan Liu, who work in Tseng's lab and intend to continue this line of research in independent careers after completing their training with Tseng.

The study was funded by the U.S. Department of Energy and the National Institutes of Health.