TUCSON, Ariz. -- The high-resolution camera on NASA's Mars Reconnaissance Orbiter has returned a dramatic oblique view of the Martian crater that a rover explored for two years.

The new view of Victoria Crater shows layers on steep crater walls, difficult to see from straight overhead, plus wheel tracks left by NASA's Mars Exploration Rover Opportunity between September 2005 and August 2007.  The orbiter's High Resolution Imaging Science Experiment camera shot it at an angle comparable to looking at landscape from an airplane window. Some of the camera's earlier, less angled images of Victoria Crater aided the rover team in choosing safe routes for Opportunity and contributed to joint scientific studies.

The new Victoria Crater image is available online at: http://www.nasa.gov/mission_pages/MRO/multimedia/mro20091012a.html and as a sub-image of the full-frame image at: http://hirise.lpl.arizona.edu/ESP_013954_1780 . 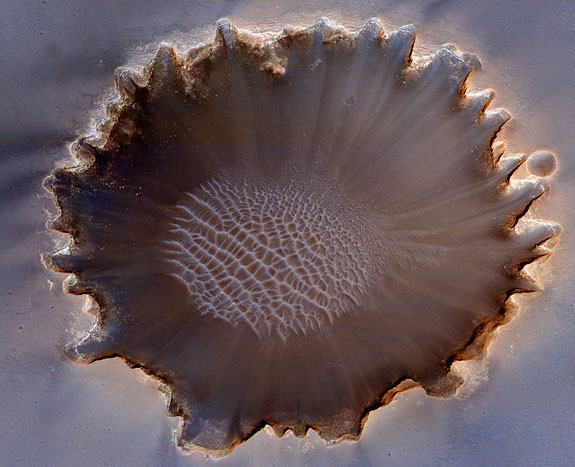 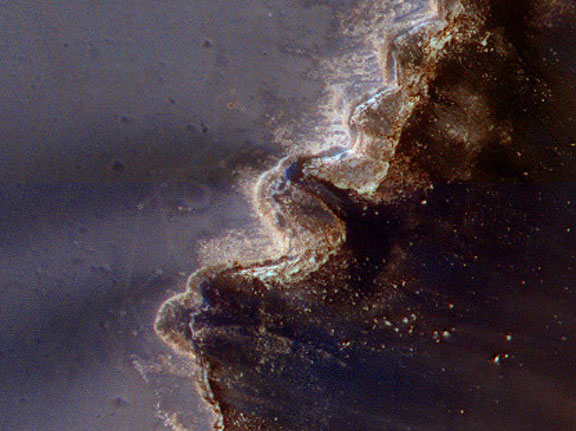 Another new image from the same camera catches an active dust devil leaving a trail and casting a shadow. These whirlwinds have been a subject of investigation by Opportunity's twin rover, Spirit.

The new dust devil image is available online at: http://www.nasa.gov/mission_pages/MRO/multimedia/mro20091012b.html and as a sub-image of the full-frame image at: http://hirise.lpl.arizona.edu/ESP_013545_1110 . 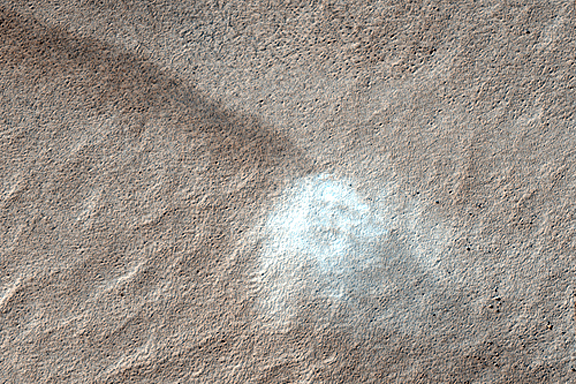 The Mars Reconnaissance Orbiter has been studying Mars with an advanced set of instruments since 2006. It has returned more data about the planet than all other past and current missions to Mars combined. For more information about the mission, visit: http://www.nasa.gov/mro .

The Mars Reconnaissance Orbiter is managed by the Jet Propulsion Laboratory, Pasadena, Calif., for NASA's Science Mission Directorate, Washington. JPL is a division of the California Institute of Technology, also in Pasadena.  Lockheed Martin Space Systems, Denver, is the prime contractor for the project and built the spacecraft. The High Resolution Imaging Science Experiment is operated by the University of Arizona, Tucson, and the instrument was built by Ball Aerospace and Technologies Corp., Boulder, Colo.