Developed by SpaceX, in collaboration with NASA, the unit allows for communication between the ISS, SpaceX's Dragon spacecraft, and ground-based mission control. The system also allows the ISS crew to monitor an approaching or departing capsule. As part of NASA's COTS competition, SpaceX will conduct flights of the Falcon 9 launch vehicle and Dragon spacecraft, culminating in Dragon berthing with the ISS and then returning to Earth.

The unique public-private partnership created through the COTS program will allow SpaceX's Dragon to serve as a replacement for cargo transport to the ISS when the Space Shuttle retires. Upon completion of the COTS requirements, SpaceX will begin to fulfill the Commercial Resupply Services (CRS) contract, awarded by NASA in late 2008. The contract includes 12 cargo flights between 2010 and 2015 and represents a guaranteed minimum of 20,000 kg to be carried to the ISS. Dragon will deliver pressurized and unpressurized cargo to the ISS and return pressurized cargo back to Earth. 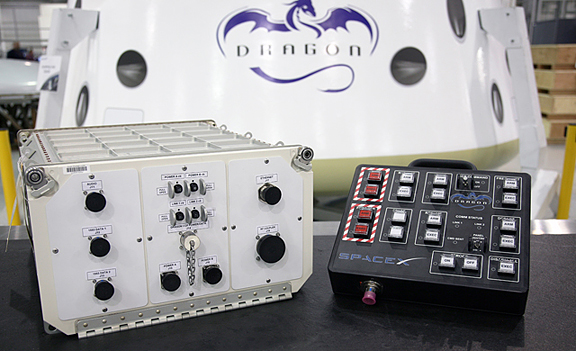 "SpaceX is pleased to have delivered the two-way communication system to the Cape in preparation for flight to the ISS," said Gwynne Shotwell, President, SpaceX. "The unit had to pass NASA's strict ISS safety standards and reviews, demonstrating our progress under the COTS program and laying the groundwork for future F9/Dragon flights to resupply cargo and possibly crew to the ISS when Shuttle retires."

Space Shuttle Atlantis is scheduled for launch no earlier than November 12, 2009, from Kennedy Space Center's Launch Pad 39A.

For more information about the Falcon family of vehicles and the Dragon spacecraft, please visit www.spacex.com.

SpaceX is developing a family of launch vehicles and spacecraft intended to increase the reliability and reduce the cost of both manned and unmanned space transportation, ultimately by a factor of ten. With the Falcon 1 and Falcon 9 vehicles, SpaceX offers highly reliable/cost-efficient launch capabilities for spacecraft insertion into any orbital altitude and inclination. Starting in 2010, SpaceX's Dragon spacecraft will provide Earth-to-LEO transport of pressurized and unpressurized cargo, including resupply to the International Space Station (ISS).

Founded in 2002, SpaceX is a private company owned by management and employees, with minority investments from Founders Fund and DFJ. The SpaceX team now numbers nearly 800, with corporate headquarters in Hawthorne, California. For more information, please visit the company's web site at www.spacex.com.