KAMUELA, Hawaii -- Linking the twin, 10-meter telescopes in Hawaii, astronomers at the W. M. Keck Observatory discovered an extended, double-layered dust disk orbiting 51 Ophiuchi, a star that is 410 light-years from Earth. It is the first time the Keck Interferometer Nuller instrument has identified such a compact cloud around a star so far away.

The new data suggest that 51 Ophiuchi is a protoplanetary system with a dust cloud that orbits extremely close to its parent star, said University of Maryland astronomer Christopher Stark, who led the research team.

Keck Observatory operates one of the largest optical interferometers in the United States. The interferometer provides high precision resolution measurements equal to a telescope as large as the distance that separates the telescopes primary mirrors -- 85 meters in the case of the Keck twins. In April 2007, the team simultaneously pointed both Keck telescopes at the star 51 Ophiuchi, or 51 Oph, and used the Interferometers Nuller, a technique to combine the incoming light in a particular way, to block the unwanted starlight of 51 Oph and measure faint adjacent signals from the dust cloud surrounding the star.

According to the observations, excess material orbited 51 Oph. Stark and his collaborators repeated the nulling measurements at several different wavelengths of light and combined this data with information from other telescopes to determine the shape and orientation of the material as well as the sizes of the dust grains.

The data suggest that two debris disks orbit 51 Oph. The inner disk has larger grains, roughly 10 micrometers or larger in diameter, and extends out to four astronomical units, or AUs, beyond the star. The second disk comprised of mainly 0.1 micrometer grains extends from roughly seven AU to 1200 AU. One AU is the distance between Earth and the Sun or roughly 93 million miles. The new results appear in the Oct. 1 Astrophysical Journal.

If these debris disks orbited the Sun, the inner cloud of larger grains would extend roughly from the position of Mercurys orbit to just past the edge of the asteroid belt. The outer disk of smaller grains would originate just before Saturns orbit and extend to a distance ten times farther than the edge of the Kuiper belt. 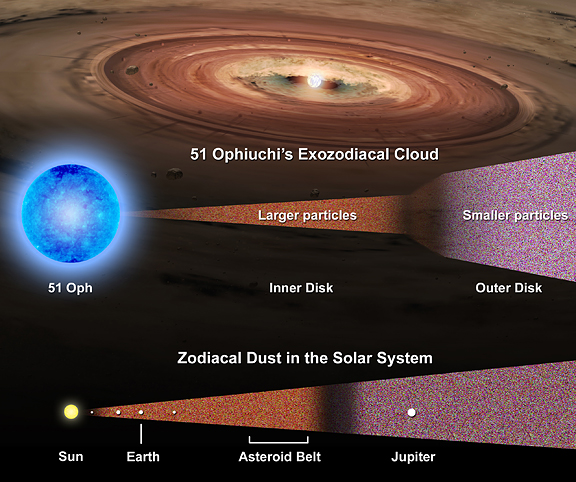 This diagram compares 51 Ophiuchi and its dust disks to the sun, planets and zodiacal dust in the solar system. Zones with larger dust grains are red; those with smaller grains are blue. Planet sizes are not to scale. Credit: NASA/GSFC/Marc Kuchner and Francis Reddy

51 Ophs inner, compact dust disk is one of the most compact dust clouds ever detected, and the new Keck Interferometer Nuller observations demonstrate the instruments ability to detect dust clouds a hundred times smaller than a conventional telescope can observe, Stark said.

The instrument was also essential to solving the mystery of what made 51 Ophs dust disk appear so compact while its spectra, or chemical fingerprints, suggested that the dust orbited at much larger distances, added Marc Kuchner, an astronomer at NASAs Goddard Space Flight Center in Greenbelt, Md. who was part of the research team. The answer was simply that the star had two debris disks.

Because of the power of the Keck Nuller, Stark and his team were able to resolve inner and outer dust disks, which together form 51 Ophs exozodiacal cloud. In similar star systems, the outer cloud of dust seems to be a distinct outer belt, probably analogous to the Kuiper belt or a second system of asteroids. But 51 Oph appears to be different, Kuchner said. The observations suggest that the stars outer cloud is comprised of smaller grains and is connected to the inner cloud so that the system has only one underlying belt of asteroids.

This system most likely represents a rare, nearby example of a young planetary system just entering the late stages of planet formation. Terrestrial planets may be forming, although none have been detected within the system yet, Stark said.

His teams data also indicates that the cloud around 51 Oph is 100,000 times more dense than the dust cloud circling the Solar System. In most planet-forming systems, as asteroid and comet collisions produce dust, the larger grains spiral toward the star while its outward pressure pushes smaller particles to the edge or even out of the system. 51 Ophiuchi, a star 260 times more luminous than the Sun, likely pushes the smaller dust grains from the inner disk to the outer disk, Kuchner explained.

Kecks Nuller, which was funded by NASA and built by the Jet Propulsion Laboratory in Pasadena, Calif., will be used to help astronomers further understand how and when these asteroid belts form and how dust from the stars debris disk might interfere with direct imaging of planets orbiting another star, he said.

The W. M. Keck Observatory operates two 10-meter optical/infrared telescopes on the summit of Mauna Kea on the island of Hawaii. The twin telescopes feature a suite of advanced instrumentation including imagers, multi-object spectrographs, high-resolution spectrographs, integral-field spectrographs and a world-leading laser-guide-star adaptive optics system. The Observatory is a scientific partnership of the California Institute of Technology, the University of California and NASA. For more information please call +1 808-881-3827 or visit http://www.keckobservatory.org.