This week in Washington, DC thousands of people will descend on the National Mall to see a variety of clean energy ideas as part of Earth Day. One of the pieces of technology on display is co-sponsored by the Challenger Center for Space Science Education.

Last year the Challenger Center, in partnership with the GSW-7000's manufacturer, Green Trail Energy, Inc., brought this powerful unit to NASA's Desert RATS activity in Arizona. Conducted every year, Desert RATS is an engineering exercise that allows NASA to demonstrate its various robotic and exploration technologies in a harsh environment that is similar in many ways to the Moon and Mars.

In 2009, the GSW-7000 was used to power education and public outreach activities that the Challenger Center conducted at Desert RATS under its educational Space Act Agreement with NASA. In addition, the GSW-7000 was also used on a trial basis to recharge batteries on several of NASA's robotic vehicles.

Current plans call for the GSW-7000 to be used again later this summer as part of the 2010 NASA Desert RATS activity.

The GSW-7000 will be on display 16-18 and 24-25 April on the National Mall adjacent to NASA's exhibits. Representatives from Challenger Center and Green Trail Energy will be on hand to answer questions.

Using space exploration as a theme and simulations as a vehicle, Challenger Center and its international network of nearly 50 Challenger Learning Centers create positive educational experiences that raise students' expectations of success, fosters a long-term interest in science, technology, engineering, and mathematics (STEM), and inspires students to pursue studies and careers in these areas. Challenger Center's network of Challenger Learning Centers across the United States and in Canada, the United Kingdom, and South Korea reach more than 400,000 students each year through simulated space missions and educational programs, and engage over 40,000 educators through missions, teacher workshops and other programs. To learn more about Challenger Center for Space Science Education, visit www.challenger.org

Greentrail Energy was founded to address the market for mobile alternative energy systems coupled with mobile communications tower systems. Our customers are the military in far off deployments, the government or private companies during a disaster, or anyone who simply needs a lot of power and communications on a mobile platform. Our fully automated systems are designed to be rapidly deployable, either via towing via a 1 ton class pickup truck, or deployed from a 40' container. Our first product, the GSW-7000 provides 4.4 kilowatts of solar power, 2.4 kilowatts of wind power on a 106' tower, and 1500 amp hours of battery storage. For more information visit www.greentrailenergy.com

GSW-7000 parked next to the NASA tents and generating wind power. FAA and Secret Service regulations prevent the raising of the tower to its full 110 foot height.

GSW-7000 parked next to the NASA tents and generating wind power.

GSW-7000 upon arrival at the National Mall. 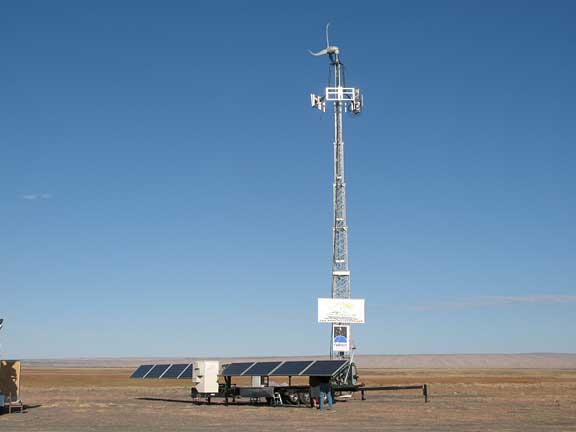