The public is invited to view the webcast, and viewers will be able to send questions to the presenters. The webcasts begin at 8:30 a.m., EDT, on September 13, 14, and 15, and is found at: http://www.ustream.tv/channel/nrao---seti-at-50

Long before 1960, Drake had wondered if humankind was the only intelligent life in the Universe. "Fresh out of graduate school, I joined the staff in Green Bank, and thought I just might have the tools to find extraterrestrials," said Drake. He devised an observational plan and whimsically called it "Project Ozma," referring to a princess in the land of Oz. Drake selected two nearby Sun-like stars to observe. 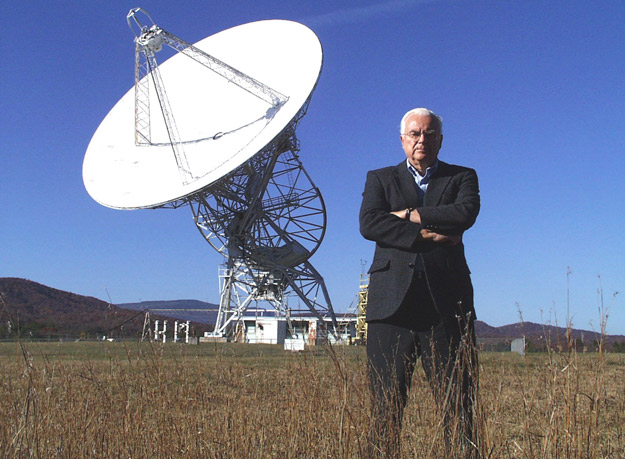 Dr. Frank Drake, now of the SETI Institute, first scientist to search for radio communication from extraterrestrials, standing in front of the telescope he used for those observations. The 85-ft diameter Tatel Telescope, located at NRAO in Green Bank, WV, was then one of the most powerful in the world.

"This workshop focuses on a topic that has a profound influence on the way we view ourselves and our place in the Universe," said Dr. Glen Langston, NRAO astronomer and workshop organizer. "We are pleased to present this to the public through the webcast," he added.

In addition to the webcast, the public can participate in a month-long celebration of the SETI anniversary by attending weekend events at Green Bank, WV. Information on these events is at: http://www.nrao.edu/index.php/learn/gbsc/setimonth