A team of planet hunters led by astronomers at the University of California, Santa Cruz, and the Carnegie Institution of Washington has announced the discovery of an Earth-sized planet (three times the mass of Earth) orbiting a nearby star at a distance that places it squarely in the middle of the star's "habitable zone," where liquid water could exist on the planet's surface. If confirmed, this would be the most Earth-like exoplanet yet discovered and the first strong case for a potentially habitable one.

To astronomers, a "potentially habitable" planet is one that could sustain life, not necessarily one that humans would consider a nice place to live. Habitability depends on many factors, but liquid water and an atmosphere are among the most important.

"Our findings offer a very compelling case for a potentially habitable planet," said Steven Vogt, professor of astronomy and astrophysics at UC Santa Cruz. "The fact that we were able to detect this planet so quickly and so nearby tells us that planets like this must be really common."

The findings are based on 11 years of observations at the W. M. Keck Observatory in Hawaii. "Advanced techniques combined with old-fashioned ground-based telescopes continue to lead the exoplanet revolution," said Paul Butler of the Carnegie Institution. "Our ability to find potentially habitable worlds is now limited only by our telescope time."

Vogt and Butler lead the Lick-Carnegie Exoplanet Survey. The team's new findings are reported in a paper http://www.ucolick.org/%7Evogt/ms_press-1.pdf to be published in the Astrophysical Journal and posted online at arXiv.org. Coauthors include associate research scientist Eugenio Rivera of UC Santa Cruz; associate astronomer Nader Haghighipour of the University of Hawaii-Manoa; and research scientists Gregory Henry and Michael Williamson of Tennessee State University. 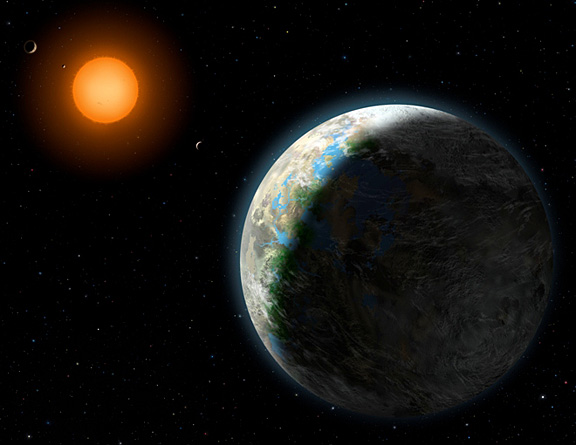 The most interesting of the two new planets is Gliese 581g, with a mass three to four times that of the Earth and an orbital period of just under 37 days. Its mass indicates that it is probably a rocky planet with a definite surface and that it has enough gravity to hold on to an atmosphere, according to Vogt.

Gliese 581, located 20 light-years away from Earth in the constellation Libra, has a somewhat checkered history of habitable-planet claims. Two previously detected planets in the system lie at the edges of the habitable zone, one on the hot side (planet c) and one on the cold side (planet d). While some astronomers still think planet d may be habitable if it has a thick atmosphere with a strong greenhouse effect to warm it up, others are skeptical. The newly discovered planet g, however, lies right in the middle of the habitable zone.

"We had planets on both sides of the habitable zone -- one too hot and one too cold -- and now we have one in the middle that's just right," Vogt said.

The planet is tidally locked to the star, meaning that one side is always facing the star and basking in perpetual daylight, while the side facing away from the star is in perpetual darkness. One effect of this is to stabilize the planet's surface climates, according to Vogt. The most habitable zone on the planet's surface would be the line between shadow and light (known as the "terminator"), with surface temperatures decreasing toward the dark side and increasing toward the light side.

"Any emerging life forms would have a wide range of stable climates to choose from and to evolve around, depending on their longitude," Vogt said.

The researchers estimate that the average surface temperature of the planet is between -24 and 10 degrees Fahrenheit (-31 to -12 degrees Celsius). Actual temperatures would range from blazing hot on the side facing the star to freezing cold on the dark side. 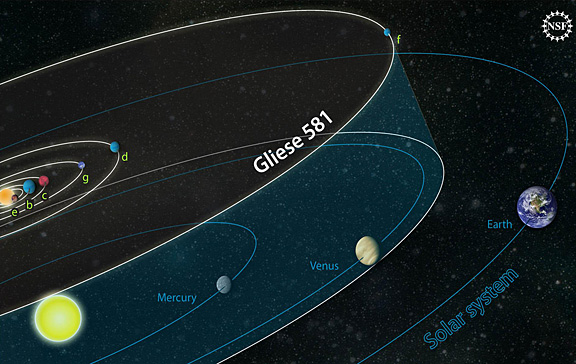 If Gliese 581g has a rocky composition similar to the Earth's, its diameter would be about 1.2 to 1.4 times that of the Earth. The surface gravity would be about the same or slightly higher than Earth's, so that a person could easily walk upright on the planet, Vogt said.

The new findings are based on 11 years of observations of Gliese 581 using the HIRES spectrometer (designed by Vogt) on the Keck I Telescope at the W. M. Keck Observatory in Hawaii. The spectrometer allows precise measurements of a star's radial velocity (its motion along the line of sight from Earth), which can reveal the presence of planets. The gravitational tug of an orbiting planet causes periodic changes in the radial velocity of the host star. Multiple planets induce complex wobbles in the star's motion, and astronomers use sophisticated analyses to detect planets and determine their orbits and masses.

"It's really hard to detect a planet like this," Vogt said. "Every time we measure the radial velocity, that's an evening on the telescope, and it took more than 200 observations with a precision of about 1.6 meters per second to detect this planet."

To get that many radial velocity measurements (238 in total), Vogt's team combined their HIRES observations with published data from another group led by the Geneva Observatory (HARPS, the High Accuracy Radial velocity Planetary Search project).

In addition to the radial velocity observations, coauthors Henry and Williamson made precise night-to-night brightness measurements of the star with one of Tennessee State University's robotic telescopes. "Our brightness measurements verify that the radial velocity variations are caused by the new orbiting planet and not by any process within the star itself," Henry said.

"If these are rare, we shouldn't have found one so quickly and so nearby," Vogt said. "The number of systems with potentially habitable planets is probably on the order of 10 or 20 percent, and when you multiply that by the hundreds of billions of stars in the Milky Way, that's a large number. There could be tens of billions of these systems in our galaxy."

This research was supported by grants from the National Science Foundation and NASA.