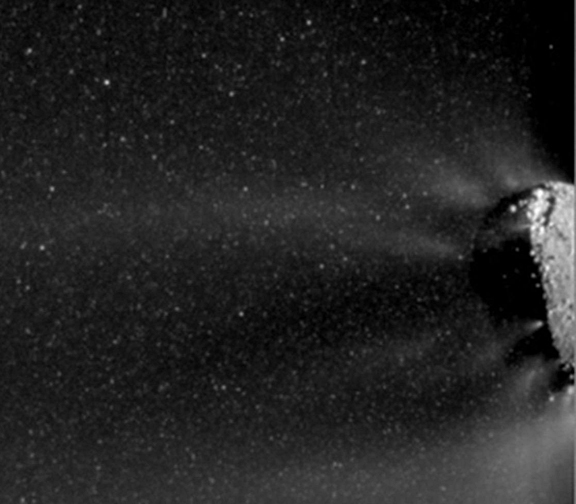 The EPOXI mission's recent encounter with comet Hartley 2 provided the first images clear enough for scientists to link jets of dust and gas with specific surface features. NASA and other scientists have begun to analyze the images.

The EPOXI spacecraft revealed a cometary snow storm created by carbon dioxide jets spewing out tons of golf-ball to basketball-sized fluffy ice particles from the peanut-shaped comet's rocky ends. At the same time, a different process was causing water vapor to escape from the comet's smooth mid-section. This information sheds new light on the nature of comets and even planets.

Scientists compared the new data to data from a comet the spacecraft previously visited that was somewhat different from Hartley 2. In 2005, the spacecraft successfully released an impactor into the path of comet Tempel 1, while observing it during a flyby.

"This is the first time we've ever seen individual chunks of ice in the cloud around a comet or jets definitively powered by carbon dioxide gas," said Michael A'Hearn, principal investigator for the spacecraft at the University of Maryland. "We looked for, but didn't see, such ice particles around comet Tempel 1."

The new findings show Hartley 2 acts differently than Tempel 1 or the three other comets with nuclei imaged by spacecraft. Carbon dioxide appears to be a key to understanding Hartley 2 and explains why the smooth and rough areas scientists saw respond differently to solar heating, and have different mechanisms by which water escapes from the comet's interior.

"When we first saw all the specks surrounding the nucleus, our mouths dropped," said Pete Schultz, EPOXI mission co-investigator at Brown University. "Stereo images reveal there are snowballs in front and behind the nucleus, making it look like a scene in one of those crystal snow globes."

Data show the smooth area of comet Hartley 2 looks and behaves like most of the surface of comet Tempel 1, with water evaporating below the surface and percolating out through the dust. However, the rough areas of Hartley 2, with carbon dioxide jets spraying out ice particles, are very different.

"The carbon dioxide jets blast out water ice from specific locations in the rough areas resulting in a cloud of ice and snow," said Jessica Sunshine, EPOXI deputy principal investigator at the University of Maryland. "Underneath the smooth middle area, water ice turns into water vapor that flows through the porous material, with the result that close to the comet in this area we see a lot of water vapor."

Engineers at NASA's Jet Propulsion Laboratory in Pasadena, Calif., have been looking for signs ice particles peppered the spacecraft. So far they found nine times when particles, estimated to weigh slightly less than the mass of a snowflake, might have hit the spacecraft but did not damage it.

Scientists will need more detailed analysis to determine how long this snow storm has been active, and whether the differences in activity between the middle and ends of the comet are the result of how it formed some 4.5 billion years ago or are because of more recent evolutionary effects.

EPOXI is a combination of the names for the mission's two components: the Extrasolar Planet Observations and Characterization (EPOCh), and the flyby of comet Hartley 2, called the Deep Impact Extended Investigation (DIXI).

JPL manages the EPOXI mission for the Science Mission Directorate at NASA Headquarters in Washington. The spacecraft was built for NASA by Ball Aerospace & Technologies Corp., in Boulder, Colo. For more information about EPOXI, visit: http://www.nasa.gov/epoxi