On the morning of Tuesday, Jan. 4, an eclipse of the Sun will be widely visible across Europe and as far east as India. People in Western Europe will find the Sun already eclipsed as the day begins, with the eclipse lasting about 80 minutes more. Even at its maximum, the eclipse will be only partial, with some of the everyday Sun still visible. Because the everyday Sun is too bright to look at safely, special solar filters or projection methods should always be used to protect the eyes.

Prof. Jay Pasachoff of Williams College in the United States, the Chair of the International Astronomical Union's Working Group on Eclipses, reports that "eclipses have inspired many astronomers and scientists as children, so it is wonderful when students and people of all ages have a chance to see an eclipse. But it is important to view it safely. Whenever the ordinary Sun is visible, even only part of it, you should not stare at it. Special solar filters are available cheaply, or dense [shade 12 or higher] welders' glass will do. Another method of seeing that the Sun is eclipsed is to punch a hole a few millimeters across in a piece of cardboard and hold it up to the Sun while you face away from the Sun and see the Sun's image projected on the ground or onto another piece of cardboard. This method is called projection with a pinhole camera. It is rare that haze or clouds are sufficient to reduce the Sun's intensity enough that one can see a partially covered Sun safely." 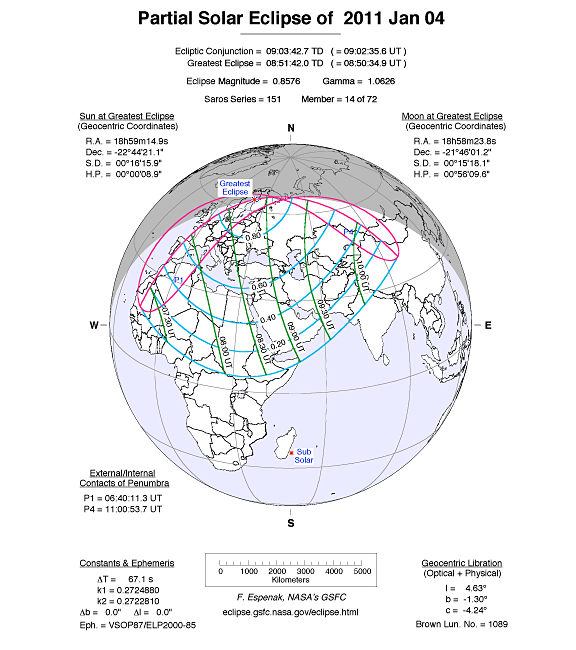 On Jan. 4, the Moon will gradually cover the Sun over a period of about 3 hours. At maximum, the eclipse will be at the horizon at sunrise in England, with 75% of the Sun's diameter covered, and then gradually emerge over the next hour and 20 minutes. At Paris or Berlin, 80% will be covered near sunrise. Farther east, the Sun will be a bit higher in the sky at maximum, 22 degrees high with 67% covered in Athens. In Israel and Egypt, the Sun will be 33 degrees high with over 55% coverage at maximum.

The International Astronomical Union's Website (http://www.eclipses.info) includes information on how to view an eclipse safely and why solar eclipses are interesting. Maps and tables of the eclipse can be found through links there and also at the NASA eclipse website: http://eclipse.gsfc.nasa.gov/OH/OH2011.html

The NASA site includes a table with eclipse circumstances for cities around the world: http://eclipse.gsfc.nasa.gov/OH/OHtables/OH2011-Tab01.pdf

Partial eclipses are not usually scientifically useful, though the Moon's advancing edge can help radio astronomers pinpoint solar storms. The year 2011 is unusual in that it has only four partial solar eclipses, for all of which the darkest part of the Moon's shadow passes off the Earth's surface. In 2012, an annular eclipse in which the Moon's disk is a little too small to cover the entire Sun will pass from Japan over the Pacific to California and farther into the U.S. on May 20. On 14 November 2012, a total solar eclipse, in which it becomes dark as twilight, will start in northeastern Australia and cross a broad swath of the South Pacific.