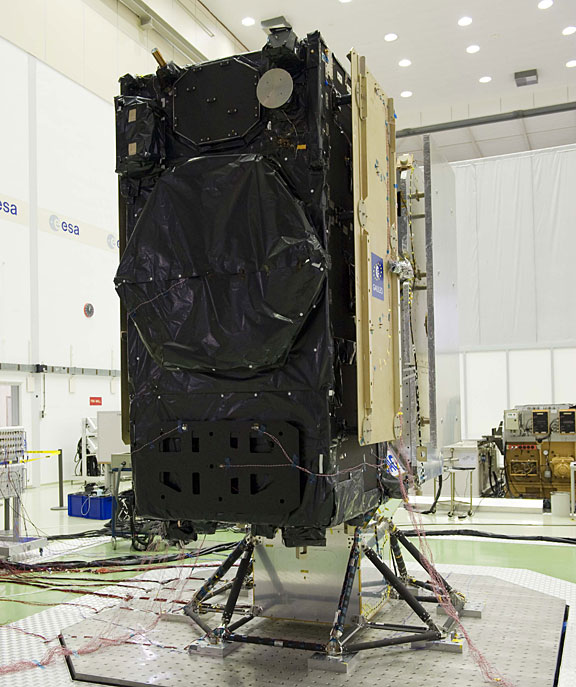 Galileo's first satellite is undergoing testing at ESA's technical centre in the Netherlands, checking its readiness to be launched into orbit. This marks a significant step for Europe's Galileo satnav constellation.

The first part of Europe's global satellite navigation system is due to be launched over the next two years - a total of four Galileo In-Orbit Validation (IOV) satellites.

The following four years to 2015 will see Galileo brought up to its first operational configuration of 18 satellites in medium Earth orbit.

Before they are launched, the IOV satellites must be formally qualified for space operations by passing a rigorous series of tests that reproduce the heavy vibration, acoustic noise and shock they will experience during the violent rocket ride into orbit - plus a little extra for safety.

The venue for these tests is the ESTEC Test Centre in Noordwijk, the Netherlands. This unique European facility combines a complete portfolio of space simulation facilities under a single roof.

"From the point of view of mechanical qualification, the Galileo IOV satellites are identical," said Pedro Cosma, Assembly Integration and Testing engineer for Galileo.

"So we are employing one of the satellites for this qualification testing, the first to be built, known as the Protoflight Model (PFM). It will respond in practically the same way as the other Flight Models - FM2, FM3 and FM4."

The satellites have been built by a consortium of European companies. Their payloads were designed, developed and assembled by EADS Astrium in Portsmouth, UK, with the overall satellite designed and developed by Astrium in Ottobrunn, Germany and assembled by Thales Alenia Space in Rome, Italy. The first satellite will endure simulated launch vibrations on ESTEC's Electrodynamic Shaker, followed by the sudden pyrotechnic shocks during separation from the launch vehicle.

Finally, it will take an acoustic battering matching the launcher's sound pressure and frequency - imagine a squadron of fighter jets taking off 30 m away - in the Large European Acoustic Facility. "We're not anticipating any surprises," added Pedro. "This is because we've previously carried out these tests on two Galileo structural/thermal models, but testing on an actual satellite remains an essential part of the official flight qualification process."

Those models have also recently been reused for other tests at ESTEC. The Galileo IOV satellites are launched two at a time, so a dispenser is needed to hold them together within the launcher fairing and then, when the time is right, to release them in orbit.

Pyrotechnic devices will shoot them safely away from the dispenser and each other. Last December these models took part in a pyrotechnic shock test alongside a qualification model of the dispenser.

"The test's success prepares us to perform a release test with the real dispenser and PFM satellite in our facilities later this month," Pedro added.

Once ESTEC testing is complete in February, the PFM will be reunited with the rest of the IOV quartet in Italy for a follow-up round of thermal vacuum testing, to prove that they can withstand the temperature extremes of space.

Finally, the satellites will be transported to Europe's Spaceport in Kourou, French Guiana to be launched on Soyuz rockets. The PFM and Flight Model 2 will be on the first flight of Soyuz from Kourou, marking a double first for ESA.