An Astronomer's Field of Dreams 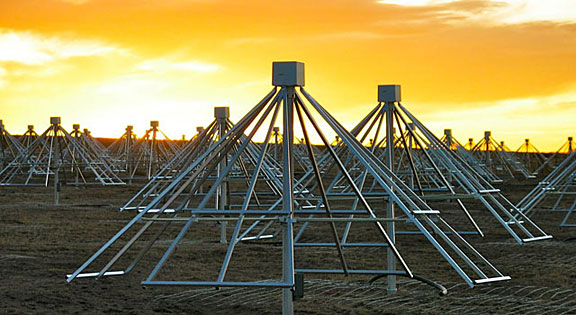 Multiple antennas of the LWA-1 station of the Long Wavelength Array in central New Mexico, photographed at sunset. Each antenna stands about 1.5 meters (5 feet) high and about 2.7 meters (9 feet) across the base. Image credit: LWA Project (at UNM)

An innovative new radio telescope array under construction in central New Mexico will eventually harness the power of more than 13,000 antennas and provide a fresh eye to the sky. The antennas, which resemble droopy ceiling fans, form the Long Wavelength Array, designed to survey the sky from horizon to horizon over a wide range of frequencies.

The University of New Mexico leads the project, and NASA's Jet Propulsion Laboratory, Pasadena, Calif., provides the advanced digital electronic systems, which represent a major component of the observatory.

The first station in the Long Wavelength Array, with 256 antennas, is scheduled to start surveying the sky by this summer. When complete, the Long Wavelength Array will consist of 53 stations, with a total of 13,000 antennas strategically placed in an area nearly 400 kilometers (248 miles) in diameter. The antennas will provide sensitive, high-resolution images of a region of the sky hundreds of times larger than the full moon. These images could reveal radio waves coming from planets outside our solar system, and thus would turn out to be a new way to detect these worlds. In addition to planets, the telescope will pick up a host of other cosmic phenomena.

"We'll be looking for the occasional celestial flash," said Joseph Lazio, a radio astronomer at JPL. "These flashes can be anything from explosions on surfaces of nearby stars, deaths of distant stars, exploding black holes, or even perhaps transmissions by other civilizations." JPL scientists are working with multi-institutional teams to explore this new area of astronomy. Lazio is lead author of an article reporting scientific results from the Long Wavelength Demonstrator Array, a precursor to the new array, in the December 2010 issue of Astronomical Journal.

The new Long Wavelength Array will operate in the radio-frequency range of 20 to 80 megahertz, corresponding to wavelengths of 15 meters to 3.8 meters (49.2 feet to 12.5 feet). These frequencies represent one of the last and most poorly explored regions of the electromagnetic spectrum.

In recent years, a few factors have triggered revived interest in radio astronomy at these frequencies. The cost and technology required to build these low-frequency antennas has improved significantly. Also, advances in computing have made the demands of image processing more attainable. The combination of cost-effective hardware and technology gives scientists the ability to return to these wavelengths and obtain a much better view of the universe.

The predecessor Long Wavelength Demonstrator Array was also in New Mexico. It was successful in identifying radio flashes, but all of them came from non-astronomy targets -- either the sun, or meteors reflecting TV signals high in Earth's atmosphere. Nonetheless, its findings indicate how future searches using the Long Wavelength Array technology might lead to new discoveries.

Radio astronomy was born at frequencies below 100 megahertz and developed from there. The discoveries and innovations at this frequency range helped pave the way for modern astronomy. Perhaps one of the most important contributions made in radio astronomy was by a young graduate student at New Hall (since renamed Murray Edwards College) of the University of Cambridge, U.K. Jocelyn Bell discovered the first hints of radio pulsars in 1967, a finding that was later awarded a Nobel Prize. Pulsars are neutron stars that beam radio waves in a manner similar to a lighthouse beacon.

Long before Bell's discovery, astronomers believed that neutron stars, remnants of certain types of supernova explosions, might exist. At the time, however, the prediction was that these cosmic objects would be far too faint to be detected. When Bell went looking for something else, she stumbled upon neutron stars that were in fact pulsing with radio waves -- the pulsars. Today about 2,000 pulsars are known, but within the past decade, a number of discoveries have hinted that the radio sky might be far more dynamic than suggested by just pulsars.

"Because nature is more clever than we are, it's quite possible that we will discover something we haven't thought of," said Lazio.

More information on the Long Wavelength Array is online at: http://lwa.unm.edu .