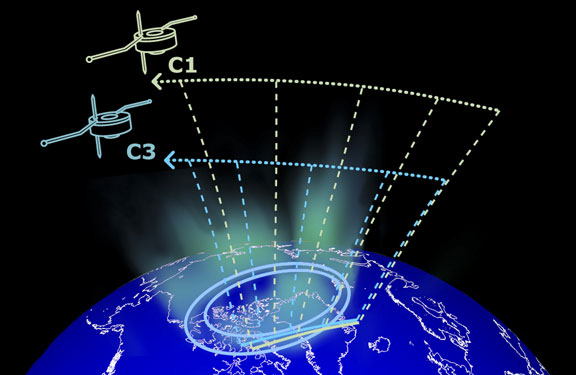 ESA's Cluster satellites have flown through a natural particle accelerator just above Earth's atmosphere. The data they collected are unlocking how most of the dramatic displays of the northern and southern lights are generated.

Two of Cluster's four satellites found themselves in a natural particle accelerator above the northern hemisphere on 5 June 2009. The first to cross was satellite C3 at an altitude of 6400 km, followed five minutes later by C1 at 9000 km.

This is the first time that scientists have measured such a region simultaneously using more than one satellite. The readings allow the electrical landscape of the acceleration region to be mapped.

"This is like geography, only instead of the contours being the height of a landscape, they are the electrical potentials that span the region," says Goran Marklund from the Royal Institute of Technology, Stockholm, Sweden.

These electrical potentials act in both uphill and downhill directions, accelerating particles towards and away from Earth, according to their charges.

When particles strike the atmosphere, they create the shimmering curtains of light known as the aurora, or more commonly the northern and southern lights. About two-thirds of the bright auroras are estimated to be produced in this way.

Since 2006, the Cluster satellites have been drifting away from their initial orbits because they are being constantly nudged by the gravity of the Moon and the Sun. Fortuitously, the current orbit occasionally passes through the Auroral Acceleration Region, which spans 4000 km to 12000 km above our planet.

The satellites do not encounter a natural particle accelerator on every orbit. Those responsible for the bright auroras are temporary alignments of the electrical fields around Earth. They are highly variable in altitude and so not always present.

This first encounter with a natural particle accelerator associated with a large-scale aurora has proved that they may be stable for at least five minutes. A few more encounters are expected in the near future before Cluster's orbit drifts back out of the region.

"Cluster has now shown us the very heart of the acceleration process responsible for most bright auroras. It has given us our first look at the electrical structure and stability of such an accelerator," says Prof. Marklund.

Such natural particle accelerators pop up ubiquitously throughout the Solar System, especially in the strong magnetic fields of the gas giants Jupiter and Saturn.

The new results from Cluster allow theoreticians to place much tighter constraints on their models of exactly how such accelerators work and give greater insight into the workings of space plasma.