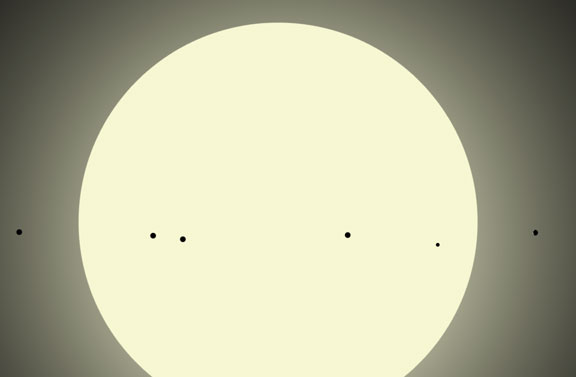 A remarkable planetary system discovered by NASA's Kepler mission has six planets around a Sun-like star, including five small planets in tightly packed orbits. Astronomers at the University of California, Santa Cruz, and their coauthors analyzed the orbital dynamics of the system, determined the sizes and masses of the planets, and figured out their likely compositions -- all based on Kepler's measurements of the changing brightness of the host star (called Kepler-11) as the planets passed in front of it.

"Not only is this an amazing planetary system, it also validates a powerful new method to measure the masses of planets," said Daniel Fabrycky, a Hubble postdoctoral fellow at UC Santa Cruz, who led the orbital dynamics analysis. Fabrycky and Jack Lissauer, a scientist at NASA Ames Research Center in Mountain View, are the lead authors of a paper on Kepler-11 published in the February 3 issue of Nature.

The five inner planets in the Kepler-11 system range in size from 2.3 to 13.5 times the mass of the Earth. Their orbital periods are all less than 50 days, so they orbit within a region that would fit inside the orbit of Mercury in our solar system. The sixth planet is larger and farther out, with an orbital period of 118 days and an undetermined mass. 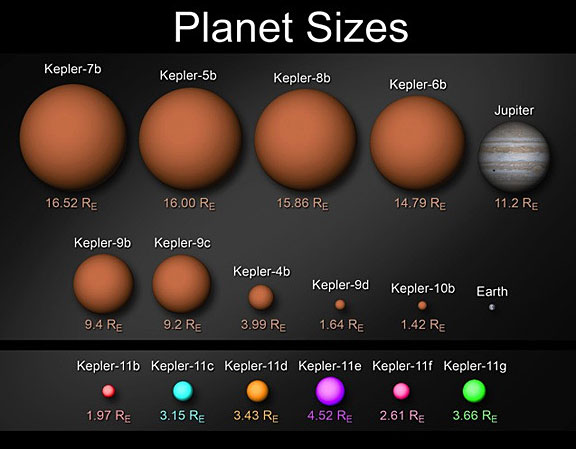 "Of the six planets, the most massive are potentially like Neptune and Uranus, but the three lowest mass planets are unlike anything we have in our solar system," said Jonathan Fortney, assistant professor of astronomy and astrophysics at UCSC, who led the work on understanding the structure and composition of the planets, along with UCSC graduate students Eric Lopez and Neil Miller.

The Kepler space telescope detects planets that "transit" or pass in front of their host star, causing periodic dips in the brightness of the star as measured by the telescope's sensitive photometer. The amount of the brightness reduction tells scientists how big the planet is in terms of its radius. The time between transits tells them its orbital period. To determine the planets' masses, Fabrycky analyzed slight variations in the orbital periods caused by gravitational interactions among the planets. 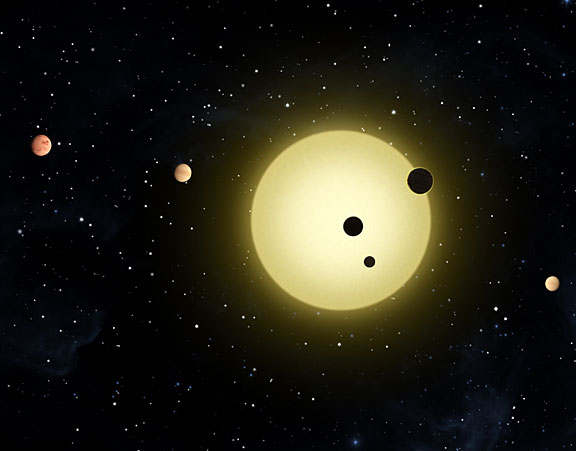 Kepler-11 is a sun-like star around which six planets orbit. At times, two or more planets pass in front of the star at once, as shown in this artist's conception of a simultaneous transit of three planets observed by NASA's Kepler spacecraft on Aug. 26, 2010. Image credit: NASA/Tim Pyle

"The timing of the transits is not perfectly periodic, and that is the signature of the planets gravitationally interacting," he said. "By developing a model of the orbital dynamics, we worked out the masses of the planets and verified that the system can be stable on long time scales of millions of years."

Previously, detections of transiting planets have been followed up with observations from powerful ground-based telescopes to confirm the planet and determine its mass using Doppler spectroscopy, which measures the "wobble" in the motion of the star caused by the gravitational tug of the planet. With Kepler-11, however, the planets are too small and the star (2,000 light-years away) is too faint for Doppler spectroscopy to work. This is likely to be the case with many of the planets detected by the Kepler mission, the main goal of which is to find small, Earth-size planets in the habitable zones of their stars.

"We will need to use orbital dynamics a lot with the Kepler mission to measure the masses of planets, so we expect to be doing a lot of those analyses," Fabrycky said.

More than 100 transiting planets have been observed by Kepler and other telescopes, but the vast majority of them are Jupiter-like gas giants, and almost all of them are in single-planet systems. The Kepler-11 system is remarkable in terms of the number of planets, their small sizes, and their closely packed orbits. Before this, astronomers had determined both size and mass for only three exoplanets smaller than Neptune. Now, a single planetary system has added five more. The sixth planet in Kepler-11 is separated enough from the others that the orbital perturbation method can't be used to determine its mass, Fabrycky said. 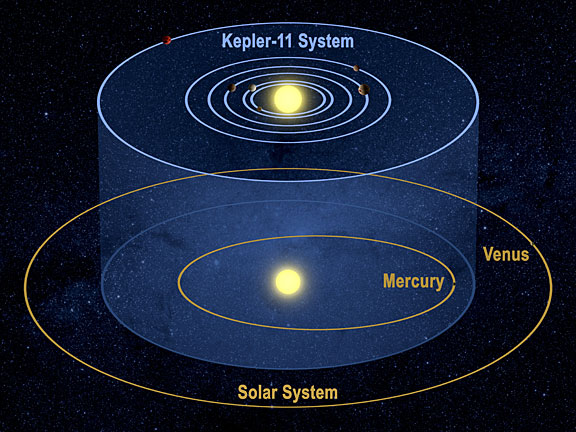 Kepler-11 has the fullest, most compact planetary system yet discovered. All six planets orbiting Kepler-11 are larger than Earth, with the largest ones being comparable in size to Uranus and Neptune. If placed in our solar system, the outermost planet would orbit between Mercury and Venus, and the other five planets would orbit between Mercury and our sun. This artist's conception shows the Kepler-11 planetary system and our solar system from a tilted perspective to demonstrate that the orbits of each lie on similar planes. Image credit: NASA/Tim Pyle

As is the case in our solar system, all of the Kepler-11 planets orbit in more or less the same plane. This finding reinforces the idea that planets form in flattened disks of gas and dust spinning around a star, and the disk pattern is conserved after the planets have formed, Fabrycky said. "The coplanar orbits in our solar system inspired this theory in the first place, and now we have another good example. But that and the Sun-like star are the only parts of Kepler-11 that are like the solar system," he said.

The densities of the planets (derived from mass and radius) provide clues to their compositions. All six planets have densities lower than Earth's. "It looks like the inner two could be mostly water, with possibly a thin skin of hydrogen-helium gas on top, like mini-Neptunes," Fortney said. "The ones farther out have densities less than water, which seems to indicate significant hydrogen-helium atmospheres."

That's surprising, because a small, hot planet should have a hard time holding onto a lightweight atmosphere. "These planets are pretty hot because of their close orbits, and the hotter it is the more gravity you need to keep the atmosphere," Fortney said. "My students and I are still working on this, but our thoughts are that all these planets probably started with more massive hydrogen-helium atmospheres, and we see the remnants of those atmospheres on the ones farther out. The ones closer in have probably lost most of it."

One reason a six-planet system is so exciting is that it allows scientists to make these kinds of comparisons among planets within the same system. "That's really powerful, because we can work out what's happened to this system as a whole," Fortney said. "Comparative planetary science is how we've come to understand our solar system, so this is much better than just finding more solitary hot Jupiters around other stars."

For example, the presence of small planets with hydrogen-helium atmospheres suggests that this system formed relatively quickly, he said. Studies indicate that stellar disks lose their hydrogen and helium gas within about 5 million years. "So it tells us how quickly planets can form," Fortney said.

The inner planets are so close together that it seems unlikely they formed where they are now, he added. "At least some must have formed farther out and migrated inward. If a planet is embedded in a disk of gas, the drag on it leads to the planet spiraling inward over time. So formation and migration had to happen early on."

The Nature paper's 39 coauthors include scientists at 16 institutions. This research was funded by NASA.