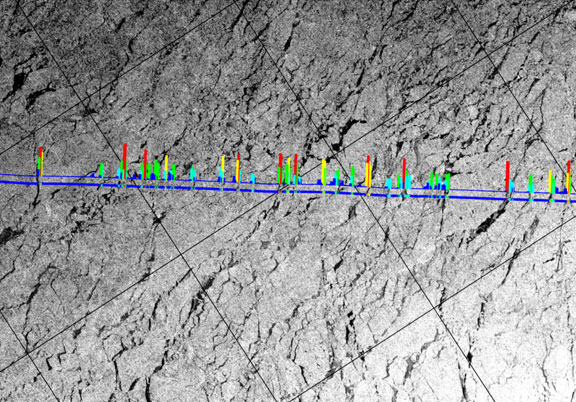 Scientists can now tap into a flow of new data that will help to determine exactly how Earth's ice is changing. This information from ESA's CryoSat mission is set to make a step change in our understanding of the complex relationship between ice and climate.

Considering the loss of the original CryoSat satellite during launch in 2005, scientists around the world have had a long wait for information on ice thickness - making the release even more of a milestone for the mission.

ESA's CryoSat Mission Manager Tommaso Parrinello announced the release at the CryoSat Validation workshop currently taking place. He said, "We are pleased to announce this important milestone, which comes only few weeks after the end of the commissioning phase.

"As of today, the international science community will have free and easy access to all of the measurements from CryoSat. This will amount to a unique dataset to determine the impact climate change is having on Earth's ice fields."

Satellites have already revealed that the extent of sea ice in the Arctic is diminishing, but CryoSat will complete the picture by providing detailed information on how the thickness of ice, both on land and floating in the polar oceans, is changing over time.

Together, information on ice extent and ice thickness will provide clear evidence of how the volume of ice is changing.

Launched in April last year, CryoSat and the ground processing set-up have shown to be in excellent working order.

Prof. Duncan Wingham from University College London said, "It's great to see the data go out on general release, and it is a measure of the efforts from the ESA team that this has been achieved so soon after launch.

"We already know that the hardware is providing extremely accurate results; now we can start to see that translate into real scientific achievements."

CryoSat carries a sophisticated radar altimeter that can measure the thickness of sea ice down to centimetres and detect changes in ice sheets, particularly around the edges where icebergs are calved from the vast ice sheets that cover Greenland and Antarctica.

It is the ability to detect minute changes in these two different types of ice that sets the CryoSat mission apart, along with the fact that the satellite's orbit takes it closer to the poles than earlier missions.

A key step towards mapping sea-ice thickness is being able to differentiate between the radar signals the satellite receives from the ice floes and those from the narrow cracks, or 'leads', of open water between the ice.

The image at the top, which is an overlay of CryoSat data on top of radar imagery from ESA's Envisat, clearly shows that echoes received by CryoSat correspond to leads in the sea ice.

Early results from the mission have also demonstrated how CryoSat data can be used to understand more about how circulation in the Arctic Ocean may change as the ice retreats.

Thanks to the satellite reaching latitudes of 88*, gaps can now be filled in maps of 'ocean dynamic topography', which is the height of the water relative to the geoid - the shape of an imaginary global ocean in the absence of wind, tides and currents.