New View of Family Life in the North America Nebula 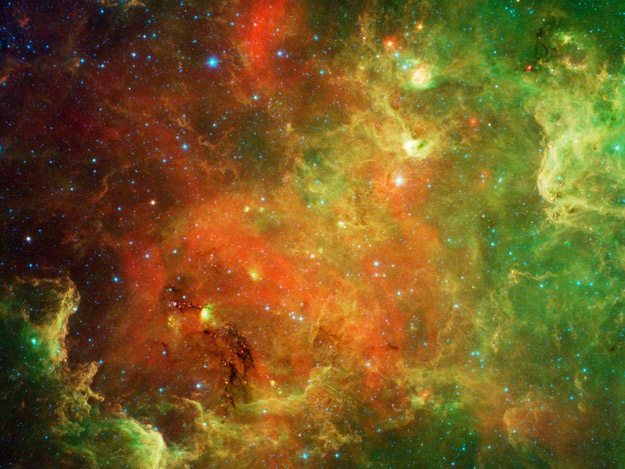 Stars at all stages of development, from dusty little tots to young adults, are on display in a new image from NASA's Spitzer Space Telescope.

This cosmic community is called the North America Nebula. In visible light, the region resembles the North American continent, with the most striking resemblance being the Gulf of Mexico. But in Spitzer's infrared view, the continent disappears. Instead, a swirling landscape of dust and young stars comes into view.

"One of the things that makes me so excited about this image is how different it is from the visible image, and how much more we can see in the infrared than in the visible," said Luisa Rebull of NASA's Spitzer Science Center at the California Institute of Technology, Pasadena, Calif. Rebull is lead author of a paper about the observations, accepted for publication in the Astrophysical Journal Supplement Series. "The Spitzer image reveals a wealth of detail about the dust and the young stars here."

Rebull and her team have identified more than 2,000 new, candidate young stars in the region. There were only about 200 known before. Because young stars grow up surrounded by blankets of dust, they are hidden in visible-light images. Spitzer's infrared detectors pick up the glow of the dusty, buried stars.

A star is born inside a collapsing ball of gas and dust. As the material collapses inward, it flattens out into a disk that spins around together with the forming star like a spinning top. Jets of gas shoot perpendicularly away from the disk, above and below it. As the star ages, planets are thought to form out of the disk -- material clumps together, ultimately growing into mature planets. Eventually, most of the dust dissipates, aside from a tenuous ring similar to the one in our solar system, referred to as zodiacal dust.

The new Spitzer image reveals all the stages of a star's young life, from the early years when it is swaddled in dust to early adulthood, when it has become a young parent to a family of developing planets. Sprightly "toddler" stars with jets can also be identified in Spitzer's view.

"This is a really busy area to image, with stars everywhere, from the North America complex itself, as well as in front of and behind the region," said Rebull. "We refer to the stars that are not associated with the region as contamination. With Spitzer, we can easily sort this contamination out and clearly distinguish between the young stars in the complex and the older ones that are unrelated."

The North America Nebula still has a mystery surrounding it, involving its power source. Nobody has been able to identify the group of massive stars that is thought to be dominating the nebula. The Spitzer image, like images from other telescopes, hints that the missing stars are lurking behind the Gulf of Mexico portion of the nebula. This is evident from the illumination pattern of the nebula, especially when viewed with the detector on Spitzer that picks up 24-micron infrared light. That light appears to be coming from behind the Gulf of Mexico's dark tangle of clouds, in the same way that sunlight creeps out from behind a rain cloud.

The nebula's distance from Earth is also a mystery. Current estimates put it at about 1,800 light-years from Earth. Spitzer will refine this number by finding more stellar members of the North America complex.

The Spitzer observations were made before it ran out of the liquid coolant needed to chill its longer-wavelength instruments. Currently, Spitzer's two shortest-wavelength channels (3.6 and 4.5 microns) are still working. The composite image shows light from both the infrared array camera and multiband imaging processor. Infrared light with a wavelength of 3.6 microns is color-coded blue; 8.0-micron light is green; and 24-micron light is red.