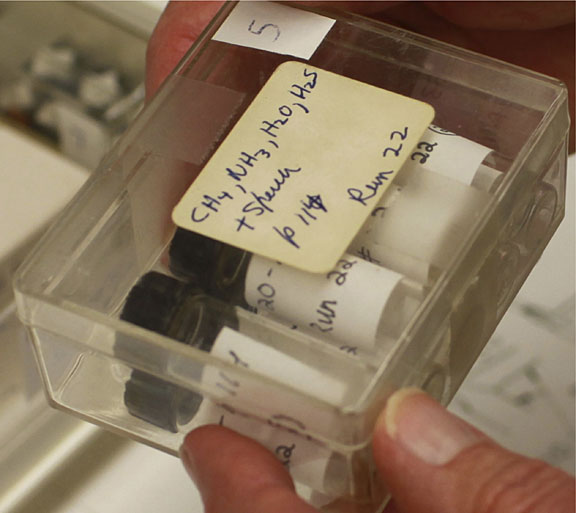 The original box containing archived spark discharge samples prepared by Stanley Miller in 1958. For unknown reasons, Miller never analyzed these even though this is his first experiment using hydrogen sulfide. The label shows Miller's original writing: p 114 refers to his notebook. Credit: Jeffrey Bada and Robert Benson/Scripps Institution of Oceanography, University of California at San Diego

The origin of life may have been smelly, according to a recent, NASA-funded analysis of residue from a variant of classic experiments performed by Dr. Stanley Miller in the 1950s. The original box containing archived spark discharge samples prepared by Stanley Miller in 1958. For unknown reasons, Miller never analyzed these even though this is his first experiment using hydrogen sulfide. The label shows Miller's original writing: p 114 refers to his notebook. Credit: Jeffrey Bada and Robert Benson/Scripps Institution of Oceanography, University of California at San Diego

"One of the primary differences between this experiment and others Miller performed is the use of hydrogen sulfide (H2S) gas to help simulate the primordial atmosphere," said Eric Parker of the Georgia Institute of Technology, Atlanta, Ga. Hydrogen sulfide gas is commonly known as the awful smell released by rotten eggs. Parker is lead author of a paper on this research appearing the week of March 21 in the on-line Early Edition of the Proceedings of the National Academy of Sciences.

"Much to our surprise, the yield of amino acids from Miller's hydrogen sulfide experiment is a lot richer than that from any other experiment he had ever conducted," said Professor Jeffrey Bada of the Scripps Institution of Oceanography, University of California at San Diego, who was a graduate student of Miller's and is the corresponding author on the paper.

From 1953 to 1954, Stanley Miller, then a graduate student at the University of Chicago, performed a series of experiments with colleague Harold Urey using a system of closed flasks containing water and a mixture of simple gases. At the time the gases used in the experiment (hydrogen, methane, and ammonia) were thought to be common in Earth's ancient atmosphere.

The gas was zapped with an electric spark. After running the experiment for a few days, the water turned brown. When Miller analyzed the water, he found it contained amino acids, which are the building blocks of proteins -- life's toolkit -- used in everything from structures like hair and nails to processes that speed up, facilitate, and regulate chemical reactions. The spark provided energy for the gas molecules to recombine into compounds such as hydrogen cyanide, aldehydes, and ketones, which rained out into the water. There these compounds further reacted in the presence of ammonia to produce amino acids.

Miller's experiment showed how simple molecules could be assembled into the more complex molecules necessary for life by natural processes, like lightning in Earth's ancient atmosphere.

After Miller's death in 2007, Bada discovered vials containing samples from the original experiments. In 2008, Bada and his team, which consisted of NASA and university researchers, analyzed these samples with modern equipment to see if they could discover chemicals that could not be detected with the techniques of the 1950s. The samples were produced by a variant of Miller's classic design that introduced a jet of steam to simulate conditions in the cloud from an erupting volcano. In October 2008, the team reported that they discovered 22 amino acids in the sample, 10 of which had never been found in any other experiment like this.

In the new research, the team analyzed samples from another variant of the experiment performed in 1958 in which Miller used carbon dioxide and hydrogen sulfide gas in the mixture. It was "lost" for decades because, for unknown reasons, Miller never reported his analysis of the results. "Stanley mentioned to several of us that he hated working with hydrogen sulfide because it smelled so bad and tended to make him sick," says Bada. "Given that some of the compounds he made in the experiment smell pretty bad, this experiment may be the basis for his reluctance to deal with H2S in experiments."

The team discovered that the experiment created amino acids containing sulfur, the first such synthesis from a simulated prebiotic environment, according to Parker, and the one that produced them in the greatest diversity and highest abundance.

"The sulfur-containing amino acids we found include significant biological ones like methionine, the product of the 'start codon' in the genetic code, which tells a cell's machinery to begin translating the design for a protein," said Dr. H. James Cleaves of the Carnegie Institution of Washington, a co-author who performed some of the analyses in collaboration with scientists in the Analytical Astrobiology Laboratory at NASA's Goddard Space Flight Center in Greenbelt, Md.

"The results of this study may provide clues about the roles that primordial volcanic plumes may have played in the formation of some of Earth's first organic compounds," adds Parker. "Volcanoes are a natural source of atmospheric H2S. Lightning events are often observed to coincide with volcanic eruptions. The use of H2S in this experiment, along with the other gases Miller used, combined with the spark discharge implemented, simulating lightning, may provide a model for what early volcanic plumes could have been composed of. The results indicate that volcanic areas on the primitive Earth may have been responsible for the localized production of large quantities and varieties of prebiotic compounds on ancient Earth."

The team at Goddard has analyzed many carbon-rich meteorites, and found amino acids in them as well, suggesting that biologically important molecules could have been made in space and delivered to ancient Earth by meteorite impacts, assisting the origin of life with a supply of ready-made parts.

"We found that the types and abundances of amino acids produced in Miller's hydrogen sulfide experiment more closely match what we find in carbon-rich meteorites, the so-called carbonaceous chondrites," says Dr. Jason Dworkin of NASA Goddard, a co-author on the paper and Chief of Goddard's Astrochemistry laboratory.

The closer match is significant, because the atmosphere Miller simulated in the hydrogen sulfide experiment more closely resembles what geoscientists now think Earth's early atmosphere may have been like, according to Parker. Instead of being heavily laden with hydrogen, methane, and ammonia, many scientists now believe Earth's ancient atmosphere was mostly carbon dioxide, carbon monoxide, and nitrogen with traces of other gases like hydrogen sulfide, methane, and ammonia.

"The results of this experiment suggest that a mixture of oxidized and reduced compounds, including hydrogen sulfide, may have been important in the formation of amino acids and amines not only on Earth, but elsewhere, namely inside the parent bodies of meteorites," says Parker.