Record loss of ozone over Arctic 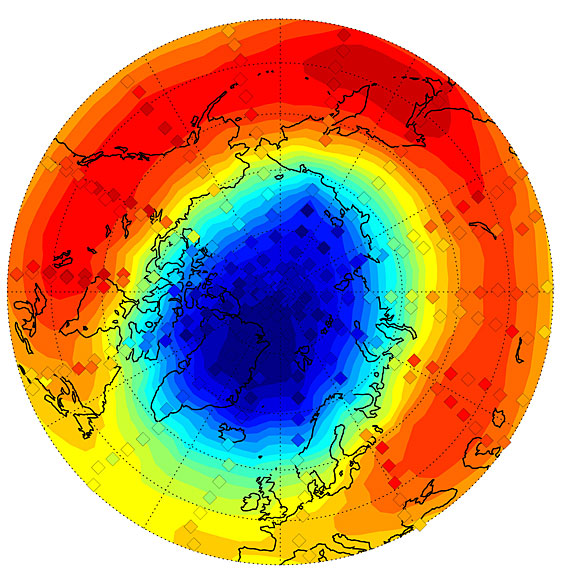 ESA's Envisat satellite has measured record low levels of ozone over the Euro-Atlantic sector of the northern hemisphere during March.

This record low was caused by unusually strong winds, known as the polar vortex, which isolated the atmospheric mass over the North Pole and prevented it from mixing with air in the mid-latitudes. This led to very low temperatures and created conditions similar to those that occur every southern hemisphere winter over the Antarctic.

As March sunlight hit this cold air mass it released chlorine and bromine atoms - ozone-destroying gases that originate from chlorofluorocarbons (CFCs) and break ozone down into individual oxygen molecules - predominantly in the lower stratosphere, around 20 km above the surface.

Ozone is a protective atmospheric layer found at around 25 km altitude that acts as a sunlight filter shielding life on Earth from harmful ultraviolet rays, which can harm marine life and increase the risk of skin cancer and cataracts.

Scientists are investigating why the 2011 and 1997 Arctic winters were so cold and whether these random events are statistically linked to global climate change.

"In a changing climate, it is expected that on average stratospheric temperatures cool, which means more chemical ozone depletion will occur," said Mark Weber from the University of Bremen.

"On the other hand, many studies show that the stratospheric circulation in the northern hemisphere may be enhanced in the future and, consequently, more ozone will be transported from the tropics into high latitudes and reduce ozone depletion."

Answering this question requires more research on ozone modelling and ozone trend monitoring, which is only possible because of the historic satellite data on record. ESA's Climate Change Initiative Programme has a project dedicated to this research.


"Measurements from the Envisat's Sciamachy, MIPAS and GOMOS instruments are providing unique ozone information that is important in enabling scientists to separate chemical and dynamical changes and helping to identify the influence of climate change on the stratosphere. It is, therefore, essential to keep these instruments measuring for as long as possible," said Weber.

Banned under the Montreal Protocol, CFCs have still not vanished from the air but are on the decline. Nevertheless, strong chemical ozone depletion will continue to occur in the coming decades during unusually cold Arctic winters.