Could Black Trees Blossom On A World With Two Suns? 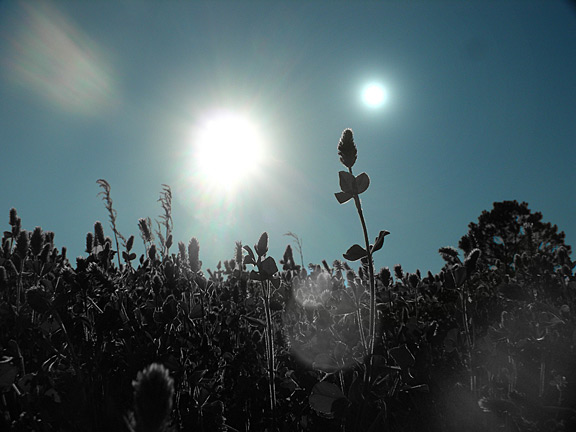 A sky with two suns is a favorite image for science fiction films, but how would a binary star system affect life evolving on an orbiting planet? Jack O'Malley-James of the University of St. Andrews has studied what plants might be like on an Earth-like planet with two or three suns and found that they may appear black or grey. He will be presenting results at the RAS National Astronomy Meeting in Llandudno on Tuesday 19th April.

Photosynthesis -- converting sunlight into energy -- is the basis for the majority of life on Earth. It is the energy source for plants and, hence, animals higher up the food chain. With multiple light sources, life may have adapted to use all suns, or different forms may develop that choose to use one specific sun. This may be the more likely option for planets on which parts of the surface are illuminated by only one sun for long periods of time.

"If a planet were found in a system with two or more stars, there would potentially be multiple sources of energy available to drive photosynthesis. The temperature of a star determines its color and, hence, the color of light used for photosynthesis. Depending on the colors of their star-light, plants would evolve very differently," said O'Malley-James.

O'Malley-James is working on a PhD, supervised by Dr. Jane Greaves at the University of St. Andrews, Prof. John Raven of the University of Dundee and Prof. Charles Cockell of The Open University, to assess the potential for photosynthetic life in multi-star systems with different combinations of Sun-like stars and red dwarfs. Sun-like stars are known to host exoplanets and red dwarfs are the most common type of star in our Galaxy, often found in multi-star systems, and old and stable enough for life to have evolved. Over 25% of Sun-like stars and 50% of red dwarfs are found in multi-star systems. In the team's simulations, the Earth-like planets either orbit two stars close together or orbit one of two widely separated stars. The team has also looked at combinations of these scenarios, with two close stars and one more distant star.

"Our simulations suggest that planets in multi-star systems may host exotic forms of the more familiar plants we see on Earth. Plants with dim red dwarf suns for example, may appear black to our eyes, absorbing across the entire visible wavelength range in order to use as much of the available light as possible. They may also be able to use infrared or ultraviolet radiation to drive photosynthesis. For planets orbiting two stars like our own, harmful radiation from intense stellar flares could lead to plants that develop their own UV-blocking sun-screens, or photosynthesizing microorganisms that can move in response to a sudden flare," said O'Malley-James.

# # #
Jack O'Malley-James is funded by the STFC Aurora scheme.

Bringing together around 500 astronomers and space scientists, the RAS National Astronomy Meeting 2011 (NAM 2011: http://www.ras.org.uk/nam-2011) takes place from 17 to 21 April in Venue Cymru (http://www.venuecymru.co.uk), Llandudno, Wales. The conference is held in conjunction with the U.K. Solar Physics (UKSP: http://www.uksolphys.org) and Magnetosphere Ionosphere and Solar-Terrestrial Physics (MIST: http://www.mist.ac.uk) meetings. NAM 2011 is principally sponsored by the RAS and the Science and Technology Facilities Council (STFC: http://www.stfc.ac.uk).

The Royal Astronomical Society (RAS: http://www.ras.org.uk), founded in 1820, encourages and promotes the study of astronomy, solar-system science, geophysics, and closely related branches of science. The RAS organizes scientific meetings, publishes international research and review journals, recognizes outstanding achievements by the award of medals and prizes, maintains an extensive library, supports education through grants and outreach activities, and represents U.K. astronomy nationally and internationally. Its more than 3,500 members (Fellows), a third based overseas, include scientific researchers in universities, observatories, and laboratories as well as historians of astronomy and others.

The Science and Technology Facilities Council

The Science and Technology Facilities Council (STFC: http://www.stfc.ac.uk) ensures the U.K. retains its leading place on the world stage by delivering world-class science; accessing and hosting international facilities; developing innovative technologies; and increasing the socio-economic impact of its research through effective knowledge exchange. The Council has a broad science portfolio including astronomy, particle astrophysics, and space science. In the area of astronomy it funds the U.K. membership of international bodies such as the European Southern Observatory.

Venue Cymru (http://www.venuecymru.co.uk) is a purpose-built conference center and theater with modern facilities for up to 2,000 delegates. Located on the Llandudno promenade with stunning sea and mountain views, Venue Cymru comprises a stunning location, outstanding quality, and exceptional value: the perfect conference package.