Free-Floating Planets May be More Common Than Stars 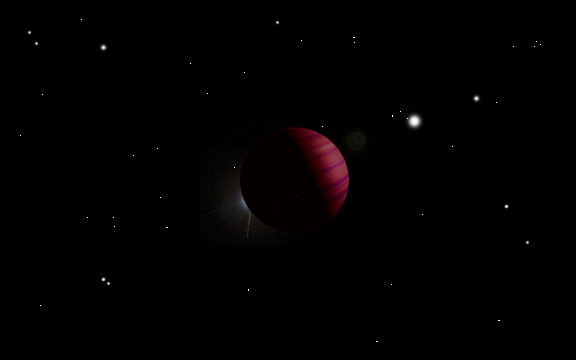 Astronomers, including a NASA-funded team member, have discovered a new class of Jupiter-sized planets floating alone in the dark of space, away from the light of a star. The team believes these lone worlds were probably ejected from developing planetary systems.

The discovery is based on a joint Japan-New Zealand survey that scanned the center of the Milky Way galaxy during 2006 and 2007, revealing evidence for up to 10 free-floating planets roughly the mass of Jupiter. The isolated orbs, also known as orphan planets, are difficult to spot, and had gone undetected until now. The newfound planets are located at an average approximate distance of 10,000 to 20,000 light-years from Earth.

"Although free-floating planets have been predicted, they finally have been detected, holding major implications for planetary formation and evolution models," said Mario Perez, exoplanet program scientist at NASA Headquarters in Washington.

The discovery indicates there are many more free-floating Jupiter-mass planets that can't be seen. The team estimates there are about twice as many of them as stars. In addition, these worlds are thought to be at least as common as planets that orbit stars. This would add up to hundreds of billions of lone planets in our Milky Way galaxy alone.

"Our survey is like a population census," said David Bennett, a NASA and National Science Foundation-funded co-author of the study from the University of Notre Dame in South Bend, Ind. "We sampled a portion of the galaxy, and based on these data, can estimate overall numbers in the galaxy."

The study, led by Takahiro Sumi from Osaka University in Japan, appears in the May 19 issue of the journal Nature.

The survey is not sensitive to planets smaller than Jupiter and Saturn, but theories suggest lower-mass planets like Earth should be ejected from their stars more often. As a result, they are thought to be more common than free-floating Jupiters.

Previous observations spotted a handful of free-floating, planet-like objects within star-forming clusters, with masses three times that of Jupiter. But scientists suspect the gaseous bodies form more like stars than planets. These small, dim orbs, called brown dwarfs, grow from collapsing balls of gas and dust, but lack the mass to ignite their nuclear fuel and shine with starlight. It is thought the smallest brown dwarfs are approximately the size of large planets.

On the other hand, it is likely that some planets are ejected from their early, turbulent solar systems, due to close gravitational encounters with other planets or stars. Without a star to circle, these planets would move through the galaxy as our sun and other stars do, in stable orbits around the galaxy's center. The discovery of 10 free-floating Jupiters supports the ejection scenario, though it's possible both mechanisms are at play.

"If free-floating planets formed like stars, then we would have expected to see only one or two of them in our survey instead of 10," Bennett said. "Our results suggest that planetary systems often become unstable, with planets being kicked out from their places of birth."

The observations cannot rule out the possibility that some of these planets may have very distant orbits around stars, but other research indicates Jupiter-mass planets in such distant orbits are rare.

The survey, the Microlensing Observations in Astrophysics (MOA), is named in part after a giant wingless, extinct bird family from New Zealand called the moa. A 5.9-foot (1.8-meter) telescope at Mount John University Observatory in New Zealand is used to regularly scan the copious stars at the center of our galaxy for gravitational microlensing events. These occur when something, such as a star or planet, passes in front of another, more distant star. The passing body's gravity warps the light of the background star, causing it to magnify and brighten. Heftier passing bodies, like massive stars, will warp the light of the background star to a greater extent, resulting in brightening events that can last weeks. Small planet-size bodies will cause less of a distortion, and brighten a star for only a few days or less.

A second microlensing survey group, the Optical Gravitational Lensing Experiment (OGLE), contributed to this discovery using a 4.2-foot (1.3 meter) telescope in Chile. The OGLE group also observed many of the same events, and their observations independently confirmed the analysis of the MOA group.

More information about exoplanets and NASA's planet-finding program is at http://planetquest.jpl.nasa.gov.