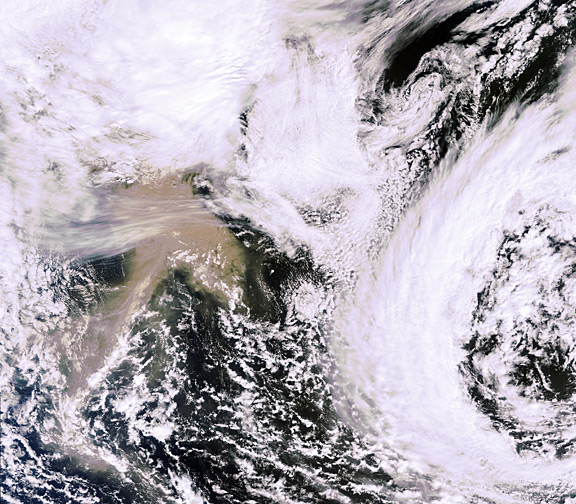 As Iceland's Grimsvoetn volcano spews ash high into the atmosphere, satellite observations are providing essential information to advisory centres assessing the possible hazards to aviation. The Grimsvoetn volcano in southeast Iceland, which had been dormant since 2004, started erupting in the evening of 21 May. As a consequence, the country's airspace has been closed.

Memories are still fresh of the chaos caused by the Eyjafjallajoekull eruption just over a year ago. European air traffic suffered major disruption, with hundreds of flights grounded owing to safety concerns about the ash cloud.

Although the Grimsvoetn eruption is larger, it is unlikely to cause the same degree of disruption because the ash plume is being injected much higher into the atmosphere.

Ground-based radar measurements in Iceland indicate that the ash reached heights of 12-17 km and is initially moving towards northern Scandinavia.

As an expert in the remote sensing of volcanic plumes and the leader of ESA's Support to Aviation for Volcanic Ash Avoidance project, Fred Prata from the Norwegian Institute for Air Research states, "It was initially an ash-rich eruption that was also very wet. A large amount of ash has fallen out, mostly in the proximity of Iceland.

"The volcano has also emitted a lot of sulphur dioxide that has been spreading north and northeast. Because this has been a high eruption there is less likelihood that it will affect continental and European aviation.

"Things could change if there is more volcanic activity - so it is important to monitor the ongoing eruption."

Satellite measurements offer an excellent means to follow the spread, extension, concentration and movement of volcanic plumes. To this end, ESA has developed dedicated services to provide fast alerts on volcanic eruptions to support VAACs within the Support to Aviation Control Service project.

The Infrared Atmospheric Sounding Interferometer carried on Europe's polar-orbiting MetOp weather satellite was one of the first instruments to provide data for warnings concerning the current eruption.

Geostationary satellites can also follow the plume's progression, offering new data every 15 minutes. These data come from the Spinning Enhanced Visible and Infrared Imager on Europe's Meteosat Second Generation satellites and from the US Geostationary Operational Environmental Satellites.
Dispersion models that use key information such as the height of the plume at the eruption site can used to help forecast the ash cloud's path.

The animation here shows that the volcanic plume split into a sulphur dioxide component that is now being carried northeast over the Arctic Ocean. The other component, which consists mainly of ash, is being transported towards the southeast, but is currently not posing a threat to aviation over Europe.

Only the efficient combination of different measurements acquired from satellites, aircraft and in situ, along with models that are being developed in preparation for services for the Global Monitoring for Environment and Security initiative will ensure safe aviation over Europe during volcanic eruptions.