NASA's WISE Mission Offers a Taste of Galaxies to Come 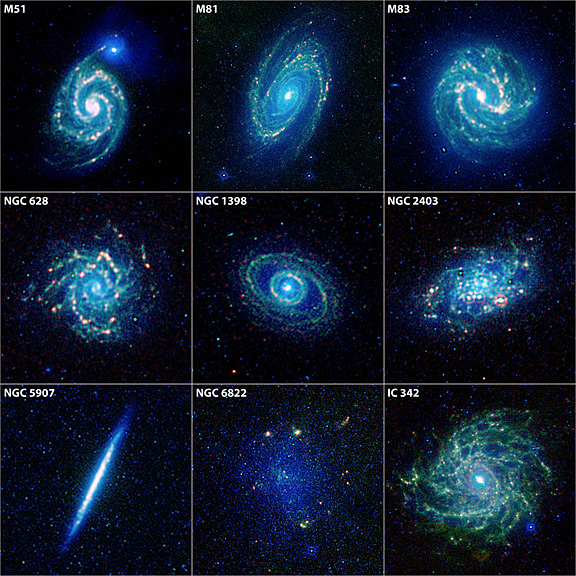 An assorted mix of colorful galaxies is being released today by NASA's Wide-field Infrared Survey Explorer mission, or WISE. The nine galaxies are a taste of what's to come. The mission plans to release similar images for the 1,000 largest galaxies that appear in our sky, and possibly more.

"Galaxies come in all sorts of delicious flavors," said Tom Jarrett, a WISE team member at the Infrared Processing and Analysis Center, California Institute of Technology, in Pasadena, who studies our Milky Way's neighboring galaxies. "Our first sample shows what WISE is capable of. We can produce spectacular high-resolution images of the largest galaxies."

The new collage showcases galaxies of varying types -- everything from "grand design spirals," with their elegant cinnamon bun-like swirling arms, to so-called "flocculent" galaxies, which have a more patchy appearance. They are close enough to us that WISE can see details of their structure, for example their sinuous arms and central bulges. Because WISE can study so many types of nearby galaxies, its observations will provide a better understanding of how these complex objects form and evolve.

WISE, which launched into space in Dec. 2009, scanned the whole sky one-and-a-half times in infrared light. It captured images of asteroids in our own solar system, distant galaxies billions of light-years away, and everything in between. The mission's first batch of data, which does not include all of the galaxies in the new collage, was released to the public in April of this year. The complete WISE catalog will follow a year later, in the spring of 2012.

"We can learn about a galaxy's stars -- where are they forming and how fast?" said Jarrett. "There's so much diversity in galaxies to explore."

The new collection of nine galaxies shows off this diversity, with members of different sizes, colors and shapes. Infrared light from the galaxies, which we can't see with our eyes, has been translated into visible-light colors that we can see. Blue colors show older populations of stars, while yellow indicates dusty areas where stars are forming.

Some of the galaxies are oriented toward us nearly face-on, such as Messier 83, and others are partly angled away from us, for example Messier 81. One galaxy, NGC 5907, is oriented completely edge-on, so that all we can see is its profile. The edge of its main galaxy disk appears pencil-thin, and its halo of surrounding stars is barely visible as a green glow above and below the disk.

The arms of the galaxies come in different shapes too. Messier 51 has arms that look like a spiral lollipop, while the arms of the flocculent galaxy NGC 2403 look choppy, perhaps more like layered frosting. Astronomers think that gravitational interactions with companion galaxies may lead to more well-defined spiral arms. One such companion can be seen near Messier 51 in blue. Some of the galaxies also have spokes, or spurs, that join the arms together, such as those in IC 342.

Read about the other galaxies in the new collage at http://wise.ssl.berkeley.edu/gallery_menagerie.html