Betting on the Most Distant Gamma Ray Burst Ever Seen 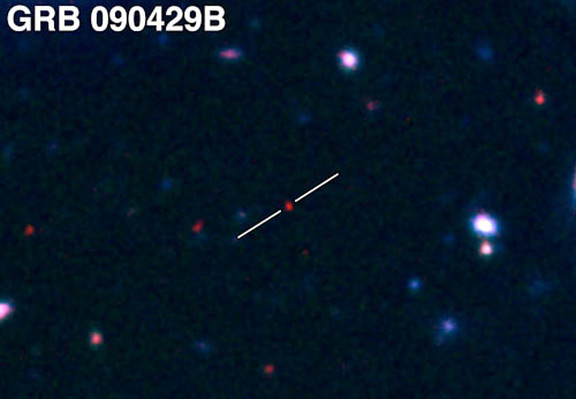 In a game of cosmological one-upmanship, what is likely the most distant gamma ray burst (GRB) ever detected could be presenting humanity with a glimpse back to within about half a billion years of the Big Bang. "Like any finding of this sort there are uncertainties," said the study's principal investigator Antonino Cucchiara. "However, if I were in Vegas, I would never bet against the odds that this is the most distant GRB ever seen and we estimate that there is even a 23% chance that it is the most distant object ever observed in the universe."

A unique set of images from the Gemini North telescope in Hawaii clearly reveals the infrared afterglow of this powerful burst. More importantly, the data allowed the researchers to estimate its distance with a relatively high degree of certainty, placing it near the edge of the observable universe.

The finding, announced today at the American Astronomical Society meeting in Boston, Massachusetts, follows the evolution of a gamma ray burst (GRB 090429B) discovered by NASA's Swift satellite in April of 2009. GRBs like this one are a consequence of the deaths of massive stars, with an initial brief burst of high-energy emission gradually fading to an afterglow of light at other wavelengths. The subsequent afterglow was detected only at infrared wavelengths using the Gemini North telescope.

This result follows on the heels of other announcements by astronomers over the past few years that have extended the edge of the observable universe and pushed the depth of our vision deeper and deeper into the past by looking at both GRBs and galaxies.

Astronomers quantify large distances in terms of redshift, "z" where higher values of z indicate greater distance and greater lookback time into the early universe. The previous GRB record holder has an estimated redshift or z value of around 8.2, with GRB 090429B estimated at 9.4. Other galaxies at comparable or even larger redshifts may have already been detected, although some of their distance estimates are uncertain.

The research team, led by former Penn State University graduate student Antonino Cucchiara (now at the University of California at Berkeley), marshaled the extreme vision of Gemini and other large ground- and space-based telescopes to understand the object. According to Cucchiara, "Gemini was the right telescope, in the right place, at the right time. The data from Gemini was instrumental in allowing us to reach the conclusion that the object is likely the most distant GRB ever seen." If the team is correct, this light embarked on its journey some 13.1 billion years ago or about 520 million years after the Big Bang -- surprisingly close to the advent of the Big Bang 13.7 billion years ago. Additionally, this GRB appears to be normal, leading to the conclusion that it is not the consequence of the very first generation of stars formed in the universe. The implication is that the early, extremely young universe was already a busy star factory.

Reaching the conclusion that GRB 090429B is so distant was not easy and is one reason it has taken two years for this result to be announced. "Ideally we would have gathered a spectrum to measure the distance precisely, but we were foiled at the last minute when the weather took a turn for the worse on Mauna Kea. Since GRB afterglows fade so quickly, we never got a second chance," said Derek Fox, Cucchiara's advisor for his graduate research at Penn State University.

However, by using the existing data from Gemini and combining it in innovative ways with wider-field images from the United Kingdom Infrared Telescope (also on Hawaii's Mauna Kea), the team was able to estimate the redshift of GRB 090429B with a high degree of confidence. "Also, the fact that we were never able to detect anything in the spot where we saw the afterglow in the Gemini data gave us the missing link in converging on this extremely high redshift estimate," said Cucchiara. "We looked with Gemini, the Hubble Space Telescope and also with the Very Large Telescope in Chile and never saw anything once the afterglow faded. This means that this GRB's host galaxy is so distant that it couldn't be seen with any existing telescopes. Because of this, and the information provided by the Swift satellite, our confidence is extremely high that this event happened very, very early in the history of our universe."

The paper based on this work is accepted in The Astrophysical Journal. Authors include Antonino Cucchiara (Penn State University/UC Berkeley), Derek Fox (Penn State University), Andrew Levan (University of Warwick, UK), and Nial Tanvir (University of Leicester, UK) and 31 astronomers from around the world. The paper will be posted online to the preprint server arXiv.org on 25 May 2011. Search http://arxiv.org for the title of the paper, "A Photometric Redshift of z~9.4 for GRB 090429B."

The Gemini Observatory is an international collaboration with two identical 8-meter telescopes. The Frederick C. Gillett Gemini Telescope is located on Mauna Kea, Hawaii (Gemini North) and the other telescope on Cerro Pachon in central Chile (Gemini South); together the twin telescopes provide full coverage over both hemispheres of the sky. The telescopes incorporate technologies that allow large, relatively thin mirrors, under active control, to collect and focus both visible and infrared radiation from space.

The Gemini Observatory provides the astronomical communities in seven partner countries with state-of-the-art astronomical facilities that allocate observing time in proportion to each country's contribution. In addition to financial support, each country also contributes significant scientific and technical resources. The national research agencies that form the Gemini partnership include: the US National Science Foundation (NSF), the UK Science and Technology Facilities Council (STFC), the Canadian National Research Council (NRC), the Chilean Comision Nacional de Investigacion Cientifica y Tecnologica (CONICYT), the Australian Research Council (ARC), the Argentinean Consejo Nacional de Investigaciones Cientificas y Tecnicas (CONICET) and the Brazilian Conselho Nacional de Desenvolvimento Cientifico e Tecnologico CNPq). The observatory is managed by the Association of Universities for Research in Astronomy, Inc. (AURA) under a cooperative agreement with the NSF. The NSF also serves as the executive agency for the international partnership.