NOAO: Has Graphene Been Detected in Space? 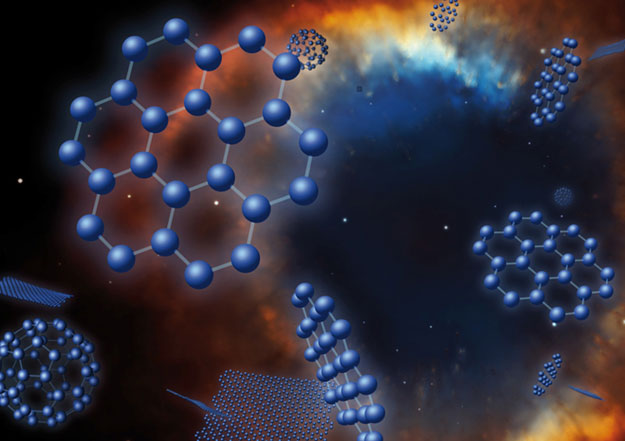 Artist's impression of the graphenes (C24) and fullerenes found in a Planetary Nebula. The detection of graphenes and fullerenes around old stars as common as our Sun suggests that these molecules and other allotropic forms of carbon may be widespread in space. Credits: IAC; original image of the Helix Nebula (NASA, NOAO, ESA, the Hubble Helix Nebula Team, M. Meixner, STScI, & T.A. Rector, NRAO.)

A team of astronomers, using the Spitzer Space Telescope, have reported the first extragalactic detection of the C70 fullerene molecule, and the possible detection of planar C24 ("a piece of graphene") in space. Letizia Stanghellini and Richard Shaw, members of the team at the National Optical Astronomy Observatory in Tucson, Arizona, describe how collisional shocks powered by the winds from old stars in planetary nebulae could be responsible for the formation of fullerenes (C60 and C70) and graphene (planar C24). The team is led by Domingo Aníbal García-Hernández of the Instituto de Astrofísica de Canarias in Spain and includes international astronomers and biochemists.

Fullerenes, or Buckyballs, are known from laboratory work on Earth and have many interesting and important properties. Fullerenes consist of carbon atoms arranged in a three dimensional sphere similar to the geodesic domes popularized by Buckminster Fuller. The C70 fullerene can be compared with a rugby ball, while C60 is compared to a soccer ball. Both of these molecules have been detected in the sample. Graphene (planar C24) is a flat sheet of carbon atoms, one atom thick, that has extraordinary strength, conductivity, elasticity and thinness. Cited as the thinnest substance known, graphene was first synthesized in the lab in 2004 by Geim and Novoselov for which they received the 2010 Nobel Prize in physics. "If confirmed with laboratory spectroscopy -- something that is almost impossible with the present techniques -- this would be the first detection of graphene in space," said team member García-Hernández.

The team has proposed that fullerenes and graphene are formed from the shock-induced (i.e., grain-grain collisions) destruction of hydrogenated amorphous carbon grains (HACs). Such collisions are expected in the stellar winds emanating from planetary nebulae, and this team sees evidence for strong stellar winds in the ultraviolet spectra of these stars. "What is particularly surprising is that the existence of these molecules does not depend on the stellar temperature, but on the strength of the wind shocks," says Stanghellini.

The Small Magellanic Cloud is particularly poor in metals (any element besides hydrogen and helium, in astronomers' parlance), but this sort of environment favors the evolution of carbon-rich planetary nebulae, which turns out to be a favorable place for complex carbon molecules. The challenge has been to extract the evidence for graphene (planar C24) from Spitzer data. "The Spitzer Space Telescope has been amazingly important for studying complex organic molecules in stellar environments," says Stanghellini. "We are now at the stage of not only detecting fullerenes and other molecules, but starting to understand how they form and evolve in stars." Shaw adds, "We are planning ground-based follow up through the NOAO system of telescopes. We hope to find other molecules in planetary nebulae where fullerene has been detected to test some physical processes that might help us understand the biochemistry of life."

The accompanying image includes an artist's conception of these molecules superimposed on the well known Helix Nebula. The smaller image shows one of the objects from this study in which fullerene has been detected in the Large Magellanic Cloud (SMP 48, from the catalog by Sanduleak, MacConnell & Philip) The name "planetary nebula" was applied to these star systems because their shell of surrounding gas made them appear like the disks of Jupiter, Saturn and Uranus as observed in 18th century telescopes. The reason for this name is obvious from the modern image.

NOAO is operated by Association of Universities for Research in Astronomy Inc. (AURA) under a cooperative agreement with the National Science Foundation.